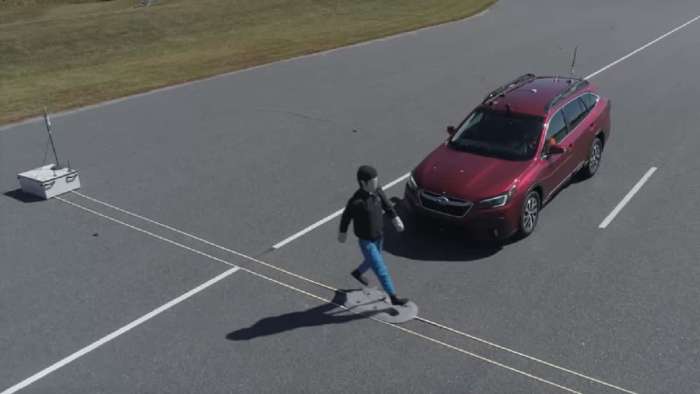 October 31st is the night of the year on which the most pedestrian impacts occur. This new IIHS report is timed to stop and make you think.
Advertisement

A new report by the Insurance Institute for Highway Safety (IIHS) again proves that the vehicles with the highest-rated safety systems are not always pricey luxury makes. In fact, in the latest round of IIHS testing of pedestrian crash prevention systems, Subaru and Nissan scored just as highly as brands like Volvo and Audi, and scored higher than some models from Mercedes Benz, BMW, Lexus, and Tesla.

IIHS Pedestrian Crash Prevention Testing
IIHS has been conducting testing of new systems automakers are installing as part of their overall driver assist safety systems. The pedestrian detection systems are intended to detect a pedestrian in front of a vehicle at limited speeds, and then slow or stop the vehicle prior to an impact. These systems are included in some forward collision prevention systems that automakers are making standard over the coming few years. Many models now include the technology as standard equipment. Note that this is not a technology mandated by any government agency. It is strictly optional on the part of automakers.

Top Ranked Systems - Nissan and Subaru Included
In the most recent round of testing of midsized cars, the Subaru Outback and Nissan Maxima, two mainstream vehicles with prices in the $20Ks and $30Ks, scored just as high as the Audi A4 and Volvo S60. These models all earned a rating of "Superior." Each of these models avoided collisions or slowed substantially in track tests. "Carmakers often roll out these kinds of advanced systems in more expensive luxury lines or as expensive options, so the superior performance of the standard systems on the more mainstream Maxima and Outback is noteworthy," said IIHS President David Harkey. Not all the vehicles tested did so well.

Three models from Ford Hyundai and Kia all earned zero credit because their systems didn't stop the car and offered no added protection for pedestrians. Tesla, BMW, and Mercedes all have systems that earn an "Advanced" rating slightly lower in the rankings than the Subaru and Nissan Systems.

For more details on this new round of testing, please visit the IIHS information page.