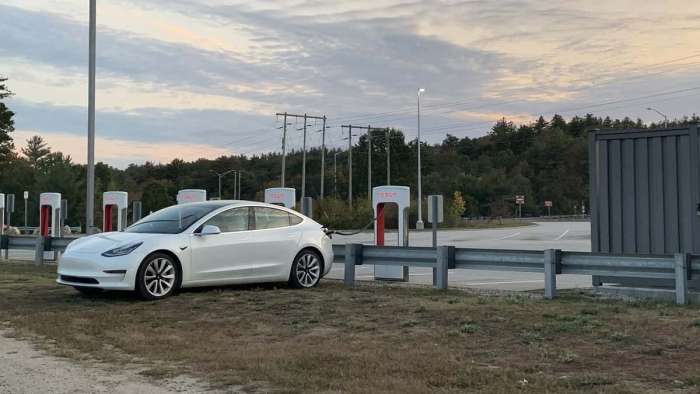 Tesla's Superchargers are a big benefit for owners, but sometimes they are on the wrong side of the divide. Name this Supercharger trick.
Advertisement

Nobody has ever accused Tesla owners of adhering to the status quo. On the contrary, they are known as folks who look for new solutions to old problems. On a recent return from the vacation area of New Hampshire North of Boston, we observed this spirit in action.

The leaf peepers are in full swing this year, and the season started a bit early. Leaves are changing and those who are trapped in the city of Boston with little to do during COVID social distancing mandates are seeking some fresh air, open space, and scenic vistas. The main artery North/South for the Metro Boston area is Rt 93. Part of which is laughingly called the "Expressway" by locals.

North of the Massachusetts-New Hampshire border is a rest area near an EZ Pass toll. During busy weekends this area can become congested, despite New Hampshire's heroic efforts at widening the roadway and making the roads as smooth as glass. In fact, construction south of the rest area are causing more than usual delays. This makes it tricky for the Tesla owners who may count on the Superchargers in Hooksett.

There are bypass roads that locals and those familiar with the area take to avoid slowdowns. One of them is Rt 3A, which runs parallel to 93 for much of the busy stretch. As it turns out, the Superchargers are placed in such a way that an innovative Tesla owner headed south can park on Rt 3A and charge up, even though those Superchargers themselves are accessed via 93 North.

One clever Tesla owner of a white Model 3 must have planned this move. The owner avoided the slowdown on 93 South on a Fall Sunday evening and parked perfectly in order to charge up at the Hooksett charger location. As you can see, the vehicle is actually behind the Supercharer. It is not in the designated lot, or parking spot.

The practice deserves a name. We are not fond the term "hack,' as we feel it is overused. So what can this be called? Planning to access a Supercharger in a novel way to avoid traffic backups? Tell us in the comments below.