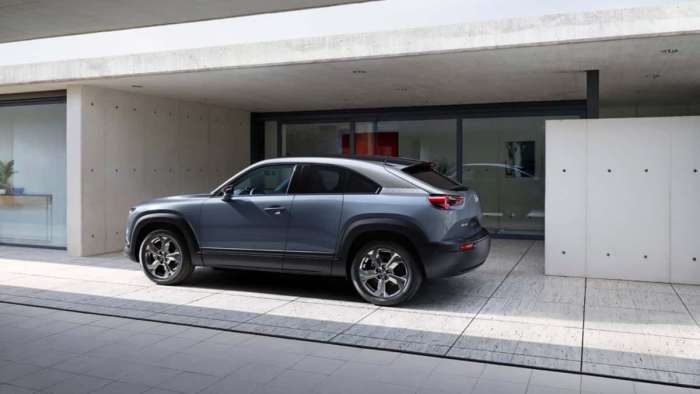 Mazda released new details and images of its all-new MX-30 electric vehicle. The first thing that caught our eye was the battery size. Will this vehicle have a usable range for US customers?
Advertisement

Mazda has released images and details of its upcoming MX-30 electric vehicle. The new model is slated to go on sales this fall in the US. The MX-30 will include battery-electric vehicle (BEV) and extended-range electric vehicle (EREV) trims. Some versions will have a silent onboard rotary gasoline engine to add range by replenishing the battery using gasoline (like the discontinued Chevy Volt).

Our first instinct when we hear news about a new BEV is to quickly scan down to the range or battery size. Mazda says the new MX-30 will have a battery size of 35.5 kWh. While no range was given, we can surmise the approximate range using this one data point.

Will that lower range make the MX-30 BEV dead on arrival? Perhaps. Or perhaps the model will fill a need that we don't understand as of yet. Why would anyone opt for a vehicle the size of a Bolt or Kona with so little range when other options are available?

“Mazda is preparing for the fast-changing US market demands by taking a multi-solution approach to electrification,” Jeff Guyton, President of Mazda North American Operations, said. “The battery-powered MX-30 will begin the introduction of additional electrified models, including a series plug-in hybrid with a rotary generator for MX-30, a plug-in hybrid for our new large platform, and a traditional hybrid for our new American-made crossover. While these powertrains will be optimized for their platforms, Mazda fans can expect great driving dynamics and beautiful design across all models.”

“The rotary generator will mark the return of our unique rotary powertrain,” Guyton said. “This technology is being engineered for nearly silent operation and will replenish the battery rather than drive the wheels. As a result, the MX-30 will always drive like the engaging EV that it is, but with freedom to charge from the wall or on the go.”

Mazda says the front-wheel drive electric motor of the MX-30 will deliver an output of 107 kW (144 horsepower) and a maximum torque of 271 Nm (200 lb-ft), providing a smooth and connected feeling that helps enhance confidence for the driver. By comparison, the Toyota RAV4 Prime offers a motor with over 300 hp.

We look forward to learning more about the new Mazda MX-30 BEV and PHEV. Check back for updates as they emerge over the coming months leading up to the date at which it is for sale.

DeanMcManis wrote on April 17, 2021 - 12:43pm Permalink
This sounds like a great vehicle design....For 2011. I keep thinking that the legacy Japanese automakers didn't get the memo on BEVs, or it was lost in translation. This is simply not competitive. Without the range extender, 100 BEV miles is minimal in the best conditions, let alone in the cold. To be fair, that is more than twice what my Cadillac ELR plug in hybrid can get off of the battery only, but that was a design created over 7 years ago. And the refreshed Chevy Bolt is close to the MX-30's price with more than twice the range. Now if Mazda stuffed that battery and rotary generator into their MX-5 Miata, I would be singing their praises! But I don't think that Mazda would ever make that kind of risky, cool move.
John Goreham wrote on April 17, 2021 - 2:23pm Permalink
Well said! Something seems off here. I think it may come down to economics. Maybe small-scale Mazda cannot afford to lose $10K on every small crossover it builds and doesn't have a "Too big to fail" lobby office in the Watergate. No matter how bad it ends up it will beat Dodge, Chrysler, GMC, Buick, and many other brands to market with a BEV or EREV, or whatever the heck is the actual plan. I'm a huge Mazda fan and multi-vehicle Mazda owner. It brought me no joy to report this news.