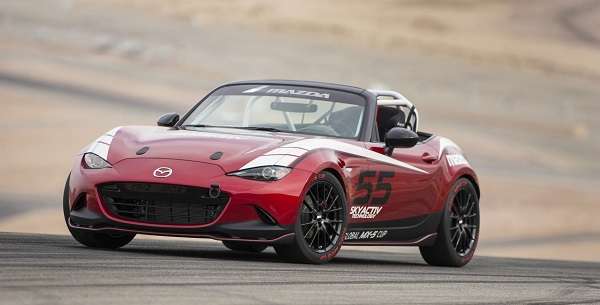 Mazda Miata Cup Car vs. Tesla Model S on track - Which is quicker?

Car and Driver tested both the Mazda Miata Cup Car and the Tesla Model S. Which is more at home on a racetrack?
Advertisement

Car and Driver (CD) has been running its Lightning Lap now for ten years straight. The idea is very cool. CD takes cars to the Virginia International Raceway and runs them on the same course. The times are recorded. We get to see what cars are really fast for their class (like the Camaro 1LE) and which are really slow for their class (Jaguar F-Type Project 7).

Even better, CD is not against breaking their own rules that cars have to be street-legal, on street-legal tires in order to run the course and earn their times. In fact, it was a Lexus RCF GT Concept that put up the best overall times this year. It broke every rule, but reminded us all that a car prepped for the racetrack is almost always able to smoke a street-legal setup. Case in point, the $53K Mazda MX-5 Miata Cup Car that CD ran, which smoked the $100K Tesla Model S P85D this year.

If “Miata beats Tesla At Race Track” sounds familiar to you it is because Motor Trend noted that when it tested the Model S on a racetrack it only had a “Miata-matching” time around Laguna Seca (Now called Mazda Raceway). Then there was the time an electric Miata beat a Tesla at a drag strip. In any case, Miata vs. Tesla is not a new idea, just a fun one.

In the latest track-testing done by CD, the Tesla Model S P85D ran the Lightning Lap at 3:17.4. Not a terrible time, but the test proves again that, for the money, the Tesla Model S is one of the slowest cars one can buy to run a road course. The main problem is that the Tesla Model S can’t keep putting out enough energy. The electronics keep cutting in to save the battery from damage. That is not a problem in drag races, which is why there are so many stories about Tesla Mode S cars winning drag races.

The Miata Cup Car ran the course in 3:06.4. It’s a race car, so it is supposed to be at home on a track. Still, the Lightning Lap is an excellent reminder to those that drive expensive luxury sedans, that cheap race cars with less than a third of their power will walk all over them on a track.

You can see the full report by purchasing Car and Driver's October 2016 Issue, on newstands now. Pages 34-59.