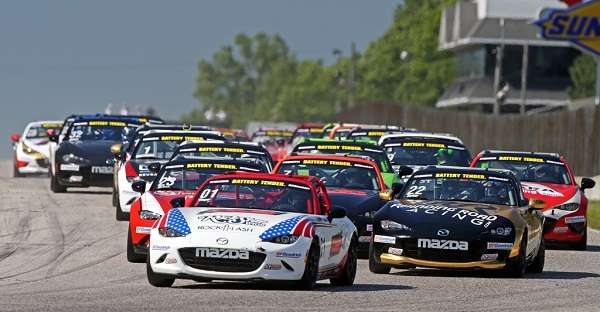 Guess How Much the Most Popular Race Car In America Costs?

Mazda updates its prices for the car many consider the most popular race car of our time.
Advertisement

How much would you pay for a race car? One that you could run at any autocross event, or at any track day, or race professionally if you had the training and time? Is $58,900 what you would have guessed? That is the price for a Mazda MX-5 Global Cup race car.

Mazda is raising its prices by about 11% starting this month because the company wanted to enhance some of the aspects of the launch edition it sold to 108 customers for $53K. Because Mazda is a cool company that values its existing customers, Mazda will extend that price to any owner of a 2016 MX-5 Global Cup Racer if they order additional cars in the next two weeks.

The 2017 Mazda Miata is already a car at home on a racetrack, but for prolonged use and for more competitive racing Mazda and its partner, Long Road Racing in Statesville, North Carolina, make about 250 changes to the car, which retails for about $30K in dealerships. Aside from the full race cage and other safety modifications, race tires are fitted.

If you think a more powerful engine is part of what makes the Miata a better racer, guess again. In fact, part of the race prep for each Cup Car is sealing the Mazda SKYACTIV 2.0 liter engine so that each racer has the same power to put to use. Here is a list of some changes Mazda typically includes:
 Motorsports-specific gearbox
 Motorsports-specific engine brackets
 Differential bushing inserts
 Addition of fuel pump-out kit per customer request
 ECU hardware and software updates

John Doonan, director of motorsports, Mazda North American Operations (MNAO), explains the changes, by saying, “To minimize the need for mid-season rebuilds, we have switched to a motorsports-specific gearbox. While it uses many of the stock components, it is a track-only part. Likewise we have redesigned the engine brackets to better withstand the constant high-speed pounding that is beyond anything seen on the road.”

Mazda is waiting for your order. You can get started at www.mazdamotorsports.com.