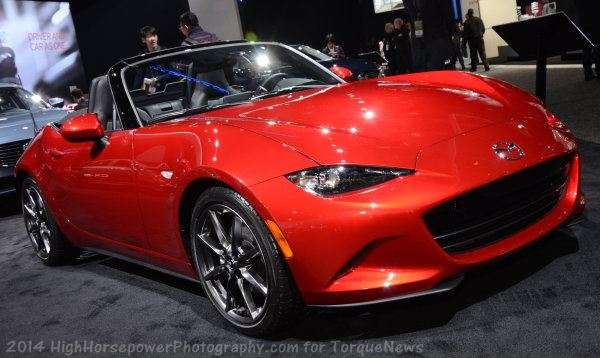 A special Club Edition is already being launched for a car not yet being sold.
Advertisement

Mazda announced today that it will reveal a 2016 MX-5 Miata Club Edition at the New York Auto Show this coming first week of April. If you are a fan of sporty Miatas, then this is the car built for you. Mazda says the new 2016 Club Edition MX-5 will be the “…most aggressive road-going iteration of Mazda's fourth-generation flagship roadster.” Based on this writer’s experience with the prior generation Miata, getting the most performance possible in an MX-5 is always a good idea.

Although Mazda has not announced it yet, here is what one should expect in a 2016 MX-5 Miata Club Edition. First off, the wheels will be the larger 205/45R-17 ones with summer performance rubber. The base cars will have 16s on all-season rubber. The engine will be the new (or newish) 2.0-liter four-cylinder producing 155 horsepower, down from 167 hp in the last generation car. The limited slip differential will be included, as will a form of the sport-tuned shocks grouped into the Grand Touring cars of the last Gen.

Hopefully, cloth seats with heat and basic infotainment will be the main reason for the Club Edition. That will allow for a slightly lower MSRP than, say a Grand Touring Miata, and still allow a buyer to get the mechanical goodies. Add back the Nav package and leather and the car won’t price out much differently than a top-spec Grand touring, so those options may be excluded.

The wheels, dash and rollover hoops will have some form of differentiation. Perhaps body-colored hoops and dash insert, perhaps the wheels will be the opposite of gun-metal gray or black from the GT models.

Will this make the Miata any quicker than the base model? No. Mazda, of course, promises that the new car will be about 150 pounds lighter, but fast is not the Miata’s thing so don't expect it to be a rocket.

Related Stories:
When will the 2016 Mazda MX-5 Miata arrive in the US?
Sayonara 3rd-generation MX-5 Miata, you will be missed