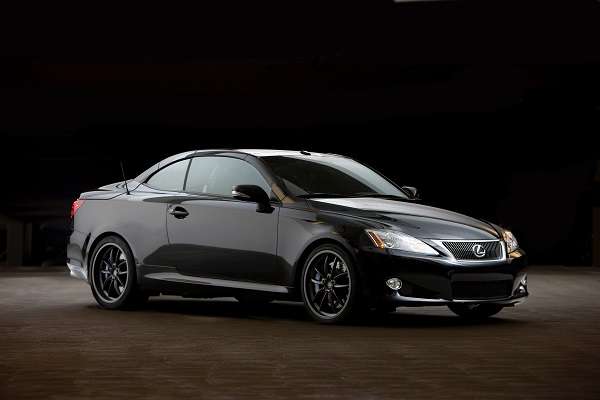 Great news for drop-top Lexus fans, the IS convertibles are staying.
Advertisement

For 2014 the Lexus IS 250C and IS 350C coupe/ convertibles will carry on using the previous generation platform and drivetrains. Like the IS F super sedan, these sport-luxury touring cars will have to wait a bit before being moved to the new IS platform now being used for the IS 350 and IS 250 sedans. This should be viewed as welcome news by Lexus convertible shoppers because it seems to indicate that the Toyota/Lexus corporations’ only convertible cars will continue on, and possibly be updated next year in 2015.

Lexus launched the first premium-luxury convertible coupe as the SC 430 at the Paris Auto Show in 2000. That car was different than the current generation of IS convertibles in many ways, but it did have the hardtop coupe body with an aluminum retractable top and no B pillar that is so sought after as a premium touring car. Although the car had 4 seat belts it was not really a 4-passenger layout. Lexus introduced the more practical IS 250C and IS 350C in 2009 as 2010 models to carry forward the coupe convertible tourer car for the company. For a short while in late 2009 both were offered.

We’ve logged many, many miles in the current IS convertibles (and sedans) and know their personalities. The current IS 250C is a fine boulevard cruiser. With only 204 horsepower from its small V6 the IS 250C is not so much slow as smooth. The IS 350C has 306 horsepower and as a touring car is quite powerful and certainly fast for on-road use. Both have a 6 speed automatic transmission and paddle shifters. The brakes on the IS 350C are also larger and offer noticeably more stopping power than the IS 250C brakes do. They each have their own personalities on back roads. One wants to be pushed, one wants to serenely take in the view. Both offer wind-free cabins around town, and on the highway with glass and windscreen up one can comfortably carry on a conversation in the car with little wind buffeting. Even those 6 feet or more will not have their hair messed up. Assuming they have hair. With the tops up the ride is Lexus-quite over bumps unless the roof seals are creaking. Our experience is that all hard-top convertibles suffer from this to some degree. That said, it is a lot quieter than more almost all soft-top convertible designs.

There are F Sport variants available. These are mainly cosmetic in the coupe convertibles. We would caution against the upgraded 19 inch forged F Sport wheels. They will make the ride firmer and in this particular car that is a big negative. Unlike the super stiff platform underpinning the new IS 250 and IS 350 sedans, the current coupe convertibles are relatively wiggley over uneven roads. Also, although their roofs are very high tech and although similar to the best in the world at any price, they do have some unwanted sounds caused by bumps, particularly with the glass down and roof up. Get the big wheels at your own risk. Lexus says it has added some structural adhesive to the new IS coupe convertibles and it will be a welcome addition. Almost all dealer inventory will have 18 inch, staggered size wheels and they look and work well on the car. The standard wheel is a 17 inch, but we have never (ever) seen one shipped to a dealer that way.

The Lexus IS 250C and IS 350C compete mainly with the BMW 3 series convertible, and the Infiniti Q60/G37 coupe convertibles. Although each seems similar on paper, they all have distinct personalities. Shoppers will quickly find that the Lexus is the least expensive when comparably equipped. We have not driven the new Q60 Convertible. However, our reviewer Aaron Turpen has driven the fixed-roof coupe and had great things to say. In conclusion, there are a few great choices in the grown-up convertibles segment, the Lexus offers two flavors, both good, but different from one another. The Lexus also offers a great value compared to its peers.