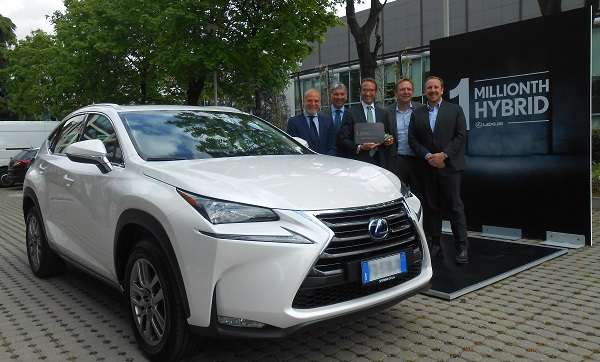 Lexus is the world leader in premium green car sales. The numbers.
Advertisement

As of the end of March, Lexus has sold 1,000,600 hybrid vehicles since it began selling hybrids in 2005. In North America alone Lexus has now sold over 345,000 hybrid vehicles. Last year, Lexus sold 38,540 hybrids in North America. Therefore, about 11% of the vehicles Lexus sold in N. America last year were hybrids. Lexus’ hybrid sales outpaced the electric vehicle sales of every EV maker with a model for sale in the U.S. These numbers do not include Toyota hybrids.

Lexus’ largest hybrid market is Europe. Unlike most competitors, Lexus has focused its premium green car models on hybrids which offer lower CO2 per mile production than do diesels, while matching the performance of diesels. North America and Japan are the next two largest hybrid markets for Lexus followed by China.

The Lexus RX mid-sized crossover was the company’s first hybrid and has been on sale now for about 11 years. To date, the RX line has sold a total of 335,000 units worldwide. One of the company’s newest hybrid models is the RC sport coupe. This model has so far garnered 3,800 sales (not available in the U.S.). The most popular car that Lexus has sold with a hybrid drive is the CT 200h. This premium compact vehicle with a similar drivetrain to the Prius has sold 267,000 units worldwide to date.

Image Note: Lexus celebrated its 1 millionth hybrid sale by delivering a vehicle to Aldo Pirronello, middle, who said, "This is my first Lexus. I chose this brand because I really value it. When I saw the new Lexus NX 300h, I was immediately captured by its design, and of course, the hybrid technology made me enthusiastic. I was surprised to hear that I was the buyer of the 1 millionth Lexus hybrid, and I am honoured to celebrate this important milestone with Lexus!" Also in photo are Lexus Milan retailer Franco Spotorno, to the left of Mr. Pirronello, head of Lexus Europe Alain Uyttenhoven and TMI CEO Andrea Carlucci.

Toyota's First EV Will Have a Name of BZ: Toyota BZ
First Videos From Inside The Boring Company's Las Vegas Loop
END_OF_DOCUMENT_TOKEN_TO_BE_REPLACED