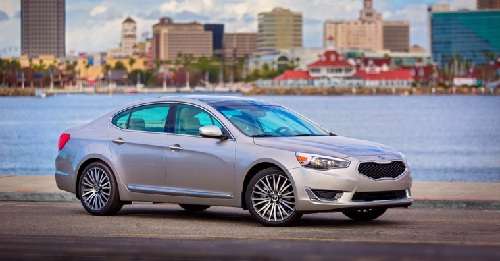 Kia launches 2014 Cadenza, its most advanced car ever in Detroit

Kia reveals Cadenza, a new front-drive luxury model at the Detroit Auto Show. Lincoln Motor Company has yet another reason to worry.
Advertisement

The all-new 2014 Kia Cadenza was launched at the North American International Auto Show this week. Kia is continuing its march from bare bones economy vehicles to luxury cars with world class styling and performance. Kia is not marching alone. Rather, it is lock step with sibling Hyundai, who presently markets this same car, but with its own flair, as the Hyundai Azera. Kia is wise to bring this new, upscale, premium sedan to market. Here’s why.

The new 2014 Kia Cadenza gives Kia’s existing customers a place to go up from the Optima. The Kia Optima has been a wild success for Kia. The company’s style guru has turned an ugly duckling into a swan. Kia is one of the few non German companies in the US market that can truthfully claim that their car has “European-Inspired Styling.” Indeed, the company’s leader, Peter Schreyer is from Bavaria and he still maintains a design studio there. The company’s engineering staff has transformed the platforms, drivetrains, and infotainment systems from entry level (barely) to class leading in all regards. The Optima is a very competitive car in the mid-full size class competing well with Accord and the like. In fact, both Kia and Hyundai’s only problems with the sedans it makes is that it can’t keep up with demand. Kia also had another problem that this car solves and that is that as buyers age and become a little more affluent, many like to step up to a slightly bigger, more power, and more luxurious car. Kia had no place for those buyers to go – until now.

The new 2014 Kia Cadenza will be slightly longer than the current Optima, which is not a small car for the class by any means. It will also be more powerful. Although we all like to tell ourselves that 4-cylinder turbocharged engines are all than a bag of chips, they really can’t match the power, refinement, and even fuel efficiency that a modern V6 has. Now, those customers can step out of an Optima, and into a Cadenza. Kia retains a customer, and an affluent one at that.

2014 Kia Cadenza Details
The drivetrain of the 2014 Kia Cadenza is the foundation of this front wheel drive car. Its all-new 3.3 liter, V6 engine has 293 horsepower. That leads the class, topping the Toyota Avalon, which is the target. The engine also does not require an expensive timing belt change at 70K like most of its competitors do. Rather, it uses a timing chain. The engine is gasoline direct injected and has all of the other modern go fast and fuel sipping bits. The Hyundai version of this car achieves 29mpg highway and this Azera will certainly match that. The six speed automatic transmission can be controlled with paddle shifters mounted to the leather and wood steering wheel. Kia may want to be careful about wood. The Avalon and many other premium cars are starting move away from building their cars from plants for fear it gives the cars the curse of seeming like it is built for “An older driver.”

Kia calls the Cadenza is most technically advanced vehicle ever. Customers will see this in the myriad infotainment and safety features Kia packs it with. Kia’s UVO infotainment package now with Google Maps will be the basis for the man-machine interface. The high resolution, 8 inch touch screen will appear large to customers moving up from the mid-full size class. Sound will come from a .55 kilowatt surround sound system complete with subwoofer and 12 speakers.

Premium features like a panoramic sunroof, adaptive front headlights (that will move as the car turns), Nappa leather and a power rear sunshade will be available. Seats will be 12-way adjustable, include a thigh extension, and are ventilated. Advanced Smart Cruise Control, that can keep you safely following the car ahead is part of the technology package. Interestingly, Kia has added a hydrophobic front windshield that will shed water. That will save drivers time and money and help them end their Rain-X addiction if so afflicted.

Kia Cadenza Pricing
Prices have not yet been announced, but using the Hyundai on-line configurator it is hard to create your own Azera that breaks $38K. Kia will likely keep this car under $40k. At that price, this vehicle is a very good value. Particularly considering the warranty is so much more comprehensive than Toyota offers.

The 2014 Kia Cadenza will be on sale in dealer showrooms starting late spring.

Three Deuce wrote on January 27, 2013 - 2:55am Permalink
The Hyundail/Kia Juggernaut, relentlessly marches on