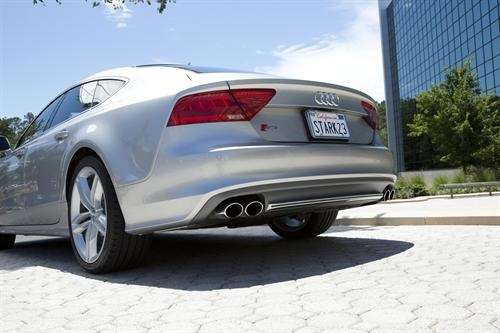 Maybe Pepper is expecting, or maybe Tony just wants a roomy limo-like vehicle with limited range, but plenty of space for a car seat and stroller. What would Bruce Wayne drive?
Advertisement

Tony Stark, aka, Iron man, is the second most fascinating fictional playboy after Christian Gray and the two could not be more different. However, they do share one fetish. Audis. In Iron Man, the first movie, Stark drives a great car, the Audi R8 4.2. That car was the tease for the second movie, in which Stark drives possibly the coolest production car to ever grace the screen, the Audi R8 V10 Spyder. The trailers are now running for the new, Iron Man 3 movie and it seems as if Stark has either started a family and decided to go green, or he is now into 4-door electric limos. Stark’s new car is an Audi A8 electric sedan.

The R8 coupe with the standard V8 is a great car. It is a lot like the Audi TT. In fact, we’ve driven them back to back and frankly, buy the TT. The experience is the same and the TT is a lot less expensive. The Audi R8 V10 Spyder on the other hand is a real marvel. The Audi R8 5.2 Spyder is a 2-seat convertible. It sports a V10 engine which is located behind the driver. Why a V10? Well, there is also the weaker, entry level version V8, but Tony Stark would not want to be embarrassed at the valet stand with such a chick car. The V10 has 2 more and even superheroes want to have 2 more.

When you get in the Spyder, the impression is that the car is of the highest possible quality. Every part of it is as good as the best part of any other car. Wherever the car touches you, or you touch it, the meeting is a splendid thing. It hugs your butt. You hold the wheel and it likes to be held. The gated shifter looks like a medical device. It is honed from aluminum, perfectly formed, and polished, but only for function, not flash. You can feel the gears mesh through the shifter knob and you can imagine them thanking you. The gears are old college friends with the engine. An electric car by contrast has no gears. The coolest thing about this car, from our point of view, is the engine sound. The V10 sounds like some kind of enraged animal. Maybe a Gruffalo. When the car revs up it first starts to yell, then screams, then it just goes completely freakin’ nuts and starts wailing and running around in circles waving its arms in the air. Here is the sound of an electric A8 as it chases bad guys “ .” Fun, huh?

Maybe Pepper Potts, Stark’s secretary and girlfriend (didn’t anyone run that past HR before they wrote it), has a bun in the oven, or maybe he got a great lease deal, but according to our sources, in the third movie, Stark drives an electric sedan. This is a comic book car, because unlike Stark’s prior cars, there is no real all-electric A8.

Loren Angelo, General Manager of Brand Marketing for Audi of America explained why Stark now drives an electric family sedan this way, “Audi is excited to once again showcase the brand’s cutting edge technology and sleek design with the Audi R8 e-tron in Marvel’s Iron Man 3. This is a strategic collaboration for us. Similar to the position of the R8 as an innovation leader, Iron Man’s character consistently evolves throughout the trilogy as he masterminds new trends in technology and engineering.” We agree that Stark likes to be a cutting edge kind of guy, but he also had a vintage Shelby AC Cobra in his garage. A BMW i8 Concept Spyder we could understand, but a sedan?

Hopefully Stark can get the bad guys before his 100 mile range runs out. Iron Man 3 is coming to theaters in April. Fifty Shades is rumored to be coming Summer 2014. If Christian Gray has a new battery powered toy we hope it isn’t his car.

Video Courtesy of Youtube.com and Eurotuner