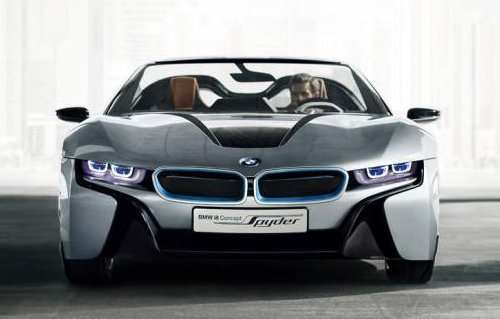 BMW i8 Spyder debuts with eDrive technology in Beijing

The Beijing Motor Show (better known as Auto China) opened today and among the big debuts was the formal introduction of the new BMW i8 Spyder and with it - announcing the new eDrive name given to the through the road hybrid drivetrain found in these sporty European super-hybrids.
Advertisement

Early this month, BMW issued a statement announcing the existence of the new BMW i8 Spyder – a topless version of the slippery i8 sport hybrid but today at Auto China, the i8 Spyder rolled into the public eye for the first time. In addition to introducing the open air version of the i8 hybrid sports car, today’s debut formally introduced the new eDrive name of the through the road hybrid drivetrain used in the i8 and i8 Spyder. The eDrive name applies to all upcoming electric and plug-in hybrid models coming in the near future from the BMW i lineup, which will include the compact, all-electric i3.

The eDrive system in the new BMW i8 Spyder includes a 131 horsepower electric motor that drives the front wheels and a 1.5L gasoline engine that drives the rear wheels with a total output of 354 horsepower and 405lb-ft of torque. This includes a 223 horsepower 3-cylinder gasoline engine, a lithium ion battery pack, a 131 horsepower electric motor that was developed internally by BMW and an intelligent motor management system that will be shared throughout all of the upcoming electric and hybrid models…although we would expect that we will see a wide variety of variations and output numbers from future models. This is the same drivetrain that we have seen in the concept versions of the BMW i3 and BMW i8 but with the debut of the i8 Spyder in Beijing – this is the first time that a model has worn the eDrive name.

This system should allow the i8 Spyder to dash from 0-62 miles per hour in less than 5 seconds while reaching a top speed of 155 miles per hour. Those aren’t remarkable figures for a BMW sports coupe but when you consider the fact that the through-the-road hybrid drivetrain allows the i8 around 20 miles of city driving in pure electric mode and a possible fuel economy rating that could be around 78 miles per gallon – this is likely the most fuel efficient and capable sports car lineup in the industry. Note: that 78 mile per gallon equivalent is based on the European cycle but figures anywhere near that number would make it one of the most efficient sports coupes on the market.

Finally, like all new BMW models, the new i8 Spyder features a distinct sporty exterior with an interior layout that combines luxury amenities with a supercar feel. The suspension is tuned to optimize the handling capacity, aided by a 50/50 weight reduction and the hybrid all wheel drive system. Click here for more information on the new BMW i8 Spyder from the debut earlier this month.

Some of you may be asking, why China? With the boom in the Chinese auto industry and the rabid popularity of supercars, there are surely some wealthy Chinese socialites who would like to have a hybrid sports car with pure electric driving range and impressive overall fuel economy. However, we can expect to see the i8 Spyder flourish in other markets including Germany and, of course, the good ol’ USA.