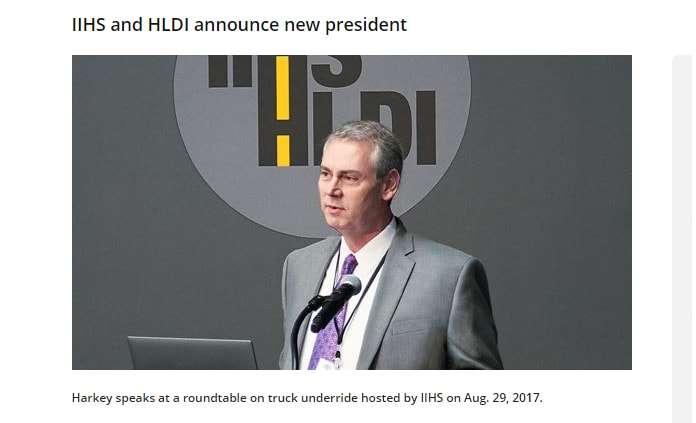 The nation's top auto safety group, the Insurance Institute for Highway Safety announces it has chosen a new President to lead the group.
Advertisement

The Insurance Institute for Highway Safety (IIHS) and its sister group, the Highway Data Loss Institute (HDLI), have announced that the group will soon have a new president. Starting in January of 2018, Dr. David L. Harkey will succeed Dr. Adrian K. Lund, who is retiring after serving as IIHS-HLDI president since 2006.

Dr. Harkey comes to IIHS and HDLI from the University of North Carolina Highway Safety Research Center. Dr. Harkey holds a Ph.D. in civil engineering from North Carolina State University. He has also been acting as the principal investigator for the Federal Highway Administration’s Highway Safety Information System. IIHS knows Dr. Harkey well. He collaborated with IIHS researchers on projects in the past. In August, Dr. Harkey was the keynote speaker at the Institute's most recent roundtable on the problem of large truck underride crashes. Dr. Harkey commented on joining IIHS and HDLI, saying, "Our roads and vehicles are much safer today because of the strong and internationally respected work of IIHS and HLDI." Harkey added, "Even with so much progress, it is unacceptable that nearly 100 lives are still lost in crashes every day. As we work with our safety partners toward the goal of zero crash deaths, we will continue to conduct high-quality research about ways to reduce crashes and the deaths, injuries, and property damage that result from them."

Dr. Lund, 68, retires after a distinguished career of important and lasting contributions to automotive safety. Lund spearheaded the $30 million expansion of the IIHS Vehicle Research Center which greatly expanded the group's testing abilities. Recently, IIHS under Dr. Lund exposed the Tesla Model S' shortcomings in safety, and also oversaw the testing that revealed many new Volvos do not earn top safety scores due to headlight performance.

"David has the right abilities and qualifications to head the Institutes at this time of tremendous opportunity," Dr. Lund says. "His wealth of experience in our field will help insurers continue to lead the way in preventing harm from motor vehicle crashes."

Dr. Harkey takes the reins at IIHS just as automated driving systems are about to be deployed. It will be interesting to see what direction the group takes in evaluating these new systems.