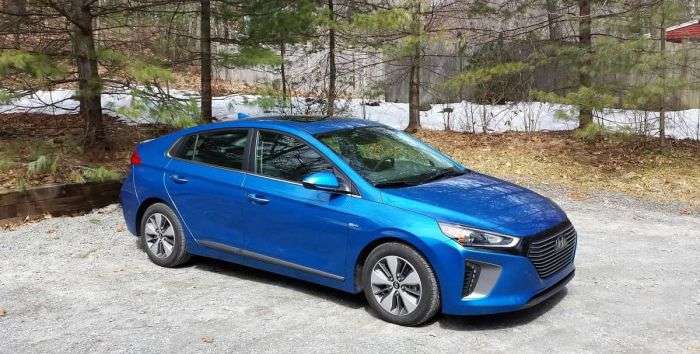 Hyundai Ioniq Test- Which Did We Like Best: EV, Plug-In, or Hybrid

We tested all three Hyundai Ioniq green cars for a week. Which do you think we liked driving the most, the EV, the Plug-in Hybrid, or the Hybrid?
Advertisement

Over a period of about ten months, we had a chance to try all three versions of the Ioniq, the Hybrid, then the EV, then the Plug-in Hybrid for a week each. We came away with a definite favorite in terms of driving enjoyment. Here's what we found.

Ioniq Hybrid Limite $31,385 - May 2017
We loved the idea of a new Hyundai green car. The Ioniq hybrid has much to attract a Prius owner. The folks at Hyundai promised an EPA estimated 55 MPG combined and a look that is so similar to the Elantra we have a hard time telling them apart in traffic. Of all the models we tested, the Ioniq Hybrid would be our third pick.

In our testing, the Ioniq Hybrid returned just 48.2 MPG (and we almost always exceed the EPA combined estimates). Coupled with lackluster acceleration in Normal/Eco Mode, we found the Ioniq was a great car, but not our cup of tea in terms of driving enjoyment. Sport Mode did help, but we don't like vehicles that require a Sport Mode just to be acceptable in daily driving.

Ioniq Plug-In Hybrid $32,395 - March 2018
The Ioniq Plug-In felt almost identical to the Hybrid version. There was no "Normal" mode in the Plug-in which we found odd. One is either in Eco, or Sport. Eco was too much of a drag to enjoy and Sport seemed to drone on and on to the point where we would get sick of listening to it and go back to Eco.We did prefer EV Mode when the battery had enough power to operate in that range. We had a hard time understanding why a Plug-In would make sense for us financially. It costs more per mile to push the Ioniq with electrons than with gasoline in our pricey electricity market ($0.22/kWh). With an EPA-Estimated 52 MPG Combined fuel economy rating on just gasoline, and 91 MPGe using both forms of energy, the Plug-in is always efficient. With about 28 miles of EV-only range, the EV mode was available to us during most of our around-town driving. We used it as much as practical.

Like the Hybrid, the Plug-In Ioniq uses a DCT transmission. The shifts just feel odd to us now. We have grown to prefer a CVT in our daily drivers.

Ioniq Electric Limited $36,885 - October 2017
The more we test electric vehicles, the more we are convinced that, in general, they perform better in the real world as daily drivers than do liquid fueled cars. The Ioniq Electric felt quick and torquey in all situations. We loved the linear acceleration and the ability to use paddles to change the degree of brake regeneration. The Ioniq Electric also has a unique push-button shifter. We enjoyed using it more than the traditional gear selector the Hybrid and Plug-in Hybrid came with. With no gear changes, the smooth feeling of the electric drive was much more to our liking than the DCT-equipped Hybrid and Plug-In.

The Ioniq Electric has a 124-mile range and earns a 136 MPGe Combined efficiency rating from the EPA.

Conclusion- Hyundai Ioniq Driving Enjoyment
There is certainly much more to the Ioniq than just the way it drives, and we are confident that a shopper will find all they need to know about features and specifications at the Hyundai shopping page. However, we wanted readers to know how these cars feel when driven. They all handle rough roads rather well and are all very enjoyable to steer and brake. In our three weeks of testing what became clear to us is that the Ioniq Electric is the most enjoyable of the three to drive due to its more satisfying acceleration.

Price Notes: All prices are for 2018 Limited trims with Ultimate Package and do not include federal or state incentives.