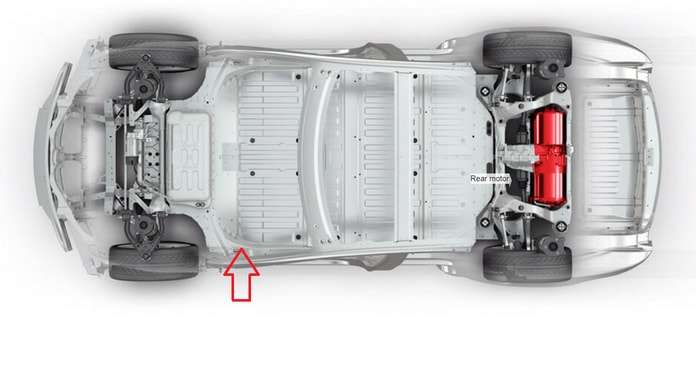 When IIHS tested the Tesla Model S the second time, something unexpected happened. Here’s the behind the scenes story.
Advertisement

The Tesla Model S narrowly escaped being given the lowest score possible on an important Insurance Institute for Highway Safety (IIHS) crash test. The story started when the Tesla Model S was first crash tested by IIHS this past winter. The Model S scored only “Acceptable” on the small frontal overlap test. This was a surprise for Tesla, who had for many years bragged that the Model S was the safest car in America. A test that everyday cars like the Honda Civic and Chevy Bolt earned a score of “Good” on with no problems had just tripped up the $100K Model S.

The small frontal overlap test was designed by IIHS and other parties to simulate a vehicle traveling at 40 MPH crashing into a utility pole or an oncoming vehicle, but only with 25% of the front of the car making contact. This test puts a lot of force on a small part of the front structure and is the most difficult to ace crash test American market vehicles are subjected to. The old-school NHTSA tests do not match the difficulty of the IIHS tests and are conducted at lower speeds. Speed matters a lot in crash tests since kinetic energy is increased by the square of the velocity.

When first tested, IIHS reported the problems that the Model S had, saying, “Tesla ran into problems in the test when the safety belt allowed the dummy's torso to move too far forward. That allowed the dummy's head to hit the steering wheel hard through the airbag. Measurements from the dummy indicated that injuries to the head, along with the lower right leg, would be possible in a real-world crash of the same severity.”

As the Institute sometimes does, it granted Tesla a second chance at the test because Tesla had claimed to have addressed this problem with a production revision. A re-test is no small undertaking. A new vehicle would need to be destroyed. Even the least expensive Model S costs over $75,000. The second test had the same overall result but uncovered a bigger concern than an “Acceptable” rating might indicate.

Some background is required on crash testing and how IIHS scores vehicles that may catch fire. In a liquid-fueled vehicle test, IIHS drains out the gasoline from the vehicle and replaces it with Stoddard Solvent, a fluid that is less volatile than gasoline. The fluid is weighed before and after the test to determine if any leaked out, and the fluid is dyed purple so there can be a visible inspection for leaks. When testing EVs, IIHS is similarly careful to take note of any damage to the battery pack or the high-voltage power systems. Damage to a battery pack can lead to a fire (and has) so IIHS takes added precautions to avoid a fire in the facility. Just one of the special measure IIHS takes is to reduce the charge of the EV’s battery pack prior to the test. IIHS’ spokesperson Russ Rader explains the scoring of test vehicles, saying, “If there’s a fuel leak in a conventional vehicle, or damage to the high-voltage system in an electric car, the rating is an automatic Poor.”

The Model S crashed in the second IIHS small frontal overlap test still had injuries to the dummy that resulted in an “Acceptable” rating. However, the two tests didn’t have similar results with regard to the left front wheel’s movement back into the passengers' space and vehicle platform. IIHS says in its report, “Maximum intrusion increased from less than 2 inches (in test 1) to 11 inches (in test 2) in the lower part and to 5 inches at the instrument panel in the second test.“ IIHS goes on to mention an important detail, adding, “The greater deformation in the second test also resulted in damage to the left front corner of the battery case.” (Don't Miss Tesla's Response On Page 2)

The battery case in an electric vehicle surrounds and protects the high voltage system of the vehicle. So why didn’t IIHS immediately score this test “Poor?” The reason is that not all Model S cars are the same. The trim tested by IIHS was the least expensive trim, called the 60. The 60 had the least number of battery cells in its battery compartment of the available trims for sale during testing. Other models, like the 75, 90, and 100 have more batteries and the added batteries occupy that space in the battery case in those models. IIHS says that the reason it didn’t follow its normal default protocol to score this test a “Poor” result is, “The deformation was limited to an area that didn't contain battery cells in the tested vehicle, so this damage didn't affect the rating. Higher-performance variants of the Model S could have battery cells in this area, but, according to Tesla, they also have different structure. They haven't been tested separately and aren't covered by this rating.”

It appears that Tesla was cut some slack and that IIHS took Tesla’s word for it that the added structure in other trims would withstand the damage of the crash. The resulting score of "Acceptable" didn't come from the damaged battery case at all, but as David Zuby of IIHS explains in the video below, were because Tesla's claimed correction didn't stop the dummy's head from missing the airbags and hitting the steering wheel hard.

Following the release of the report of the IIHS testing of large cars, which included the Model S, Tesla issued the following statement to CNBC: "Tesla's Model S received the highest rating in IIHS's crash testing in every category except for one, the small overlap front crash test, where it received the second highest rating available. While IIHS and dozens of other private industry groups around the world have methods and motivations that suit their own subjective purposes, the most objective and accurate independent testing of vehicle safety is currently done by the U.S. government, which found Model S and Model X to be the two cars with the lowest probability of injury of any cars that it has ever tested, making them the safest cars in history."

Alex wrote on September 7, 2017 - 1:03am Permalink
The claim that the 60 is different to the 75 is b.s. The battery in the 60 is exactly the same as the 75, it's just software limited. And when the Model S 100D was tested it didn't pass the roof test because Tesla didn't take into account that the 100D battery is much heavier and needed to reinforce the roof pillars. So I wouldn't take Tesla's word that they have different structures for the battery. Model S should have been given a poor rating so Tesla would take more drastic measures to fix it.
kent beuchert wrote on September 7, 2017 - 9:37am Permalink
I came across a boatload of complaints about Tesla's service and collision repair during an internet search. Collision repair apparently canot be performed except at Tesla certifed shops and apparently it is EXPENSIVE (no surprise). One guy claimed a 2MPH fender bender cost $10,000, a figure his insurance company would not pay. Two month waits to get a service appt were not uncommon, and slipshod repir work very common (50% of owners reported two attempts needed to fix their problem). After reading all those horror stories,I would not even consider buying anything Tesla makes - I don't like the idea of being captive to a "company store."
Ace Diamond wrote on June 6, 2018 - 5:45pm Permalink
There are 300 million registered cars in the USA and about 300 fire-related deaths, so the probability of being burned to death in a conventional car is ONE in a MILLION per year. There are about 200,000 TESLAS in the USA and about 5 TESLA fire deaths a year, so the probability of being burned alive in a TESLA is ONE in FORTY THOUSAND per year! Bottom line is that you are TWENTY FIVE TIMES more likely to meet a fiery death in a TESLA than in a typical conventional car with an average age of the car being 15 years compared to two years for TESLAS. It should also be noted that TESLA's greatest competition, the MB S-Class and GL-Class both have a ZERO probability of death from a fire per year. In fact, the GL is consistently rated at ZERO total deaths per year from any type of accident. Bottom line is....all those people and kids that were killed in TESLAs would have most likely survived if they drove competing BENZES.
Ace Diamond wrote on June 7, 2018 - 10:46am Permalink
Musk is just plain wrong to call his TESLAs safe if the best he can do is beat Accents and Rios in accident death rate statistics. Musk avoids comparing TESLA's safety statistics to direct competitors from Mercedes and Audi because his TESLAs will look very bad. Musk and Rosekind should be ashamed of themselves.
Peter Simonson wrote on August 11, 2019 - 10:51pm Permalink
I love that the car manufacturer can just say that it's totally safe on the other models in the range and the regulator just shrugs and goes "okie dokie, I'm just going to take your word on it, please just remember to mention in your marketing that this rating only applies to the tested model but we'll take your word for that too" So reassuring.