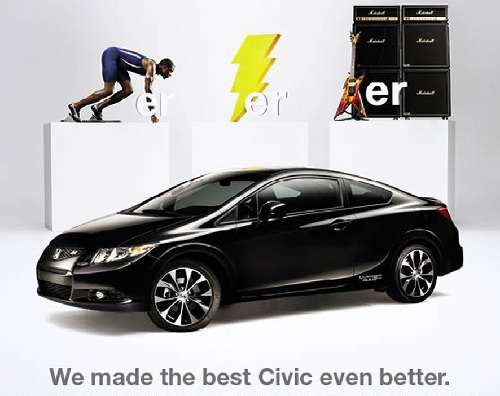 The Honda Civic has a problem. The problem is that people feel they know what a Civic is (or was) and they want something a little better. Buyers now have such high expectations for cars in this class Honda has a hard time convincing people that the Civic “is all that and a bag of chips.” In order to pull the Civic sales up Honda is doing what all car manufacturers that move away from product changes do – they are improving their advertising.

Continuous Improvement = Kaizen
The idea of incremental improvement and constant small changes for the better is ingrained in the Japanese automotive culture. As Kanye West would put it, Honda has been doing this “Since Prince was on Appolonia, since OJ was in Isotoners.” That was the simple secret to how Honda, Toyota, and Datsun were able to morph into Acura, Lexus, and Infiniti. Slow, constant improvement. It took about 30 years. The plan was perfect and it worked against Mercedes and the European manufacturers who had their heads in the sand and didn’t believe they would be outsold in the luxury market by Japanese car makers. It also worked against the Domestic American car makers, who did believe there was a threat to their market share, but who’s hands were tied by the labor agreements they had been out-negotiated into living with. The name for this plan was Kaizen.

The South Korean Kaizen Turbo
The South Koreans learned about Kaizen. They studied it and they adopted it. They copied the plan play for play, but then they did something unexpected. They worked harder, longer, and with more desperation than their competitors. The results were that the plan worked for Hyundai too, and now Kia, but it took only 15 years instead of 30. Buyers now expect what Hyundai and Kia do from all manufacturers. They expect groundbreaking changes like 2.0 liter turbos with 274 horsepower that run on regular unleaded and have 10 year warranties. They expect sexy styling form the best German (Bavarian actually) designer in the world – in cars costing $19,999.99. That upsets the applecart because in the past that price bought you reliability. Now you get that plus fun in a fancy wrapper.

Honda’s New Advertisements
Honda will roll out the plan to help the Civic compete in the coming months. Integrated Marketing Communications (IMC) is now done by every large company. Honda’s theme will be “ER.” As in “work it hardER, make it bettER, do it fastER…” (Thanks again Kanye ) . The idea is that the Civic is better, than you remember it. This is a good plan for Honda because the Kia Forte, Hyundai Elantra, and the Ford Focus are coming on stronger. Mike Accavitti, vice president of national marketing operations at American Honda Motor Co., Inc. lays out the vision in a recent press release this way, "Our belief is that there are always new ways to improve, create and imagine which can be seen in the refreshed Civic, America's best-selling compact car. The 2013 Civic is poised to beat customers' expectations. The 2013 Civic features extensive interior and exterior design upgrades, enhanced dynamics and new technology." The new advertisements will take the form of YouTube mastheads, full 60 second television commercials on the most prominent shows, such as the Rose Bowl and the Grammy awards. Readers of Food magazine will see print adverts as will those looking at ESPN The Magazine, or GQ.

The 2013 Honda Civic is a good vehicle and an excellent value. That isn’t Honda’s problem. Its problem is so are most of the competitors.

Three Deuce wrote on January 3, 2013 - 11:09am Permalink
"Fantastic"... Vehicle. Are you kidding? It's a Civic. Superlatives like that should be carefully used by auto journalists. Your credibility is worth preserving for the long run.
John Goreham wrote on January 3, 2013 - 2:31pm Permalink
You're totally correct! I got carried away. Change made. Thanks
Nicolas Zart wrote on January 5, 2013 - 11:40am Permalink
I think Honda is on the right track. I live near their US headquarter and have seen a lot of shuffling about. They hired old time consultants that actually understand cars are not just bottom line MBAs. The Accord PHEV I drove impressed me in many ways. Yes, they're not perfect or fantastic yet, nor might they ever be but it seems Honda finally realizes it has its own strengths and that they don't need to play second fiddler to Toyota anymore. Finally, they are going back to what they do well, engineering good cars that are somewhat more fun to drive then the sea of insipid mass-produced cars on the market.
Three Deuce wrote on January 5, 2013 - 10:03pm Permalink
All good Nicolas, but their challenged by the Korean products, not Toyota, Ford understands that and has responded. High build quality is a given now days, to grab customers, your going to have offer content value and attractive styling, and since people are retaining their vehicles longer, longer warranties. I'm a bit taken back by the over developed surfacing on the new Civic, but they were probably responding to the Hyundai/Kia stylings. I really like the look of the previous iteration, especially the coupe. Clean, purposeful, with a bit of the fast forward, Volante spirit. Spent quite a bit of time in my gal friends 2011 Civic, including some serious seat time pounding the desert highways of the West, knocking down one day trips over 1,000 miles. Pretty good little cars, but a lot of road noise and disappointing mileage. Just adequate cars with decent value, but they will continue to have devoted following, unless the devotees try out some of the competition.
Nicolas Zart wrote on January 14, 2013 - 11:44am Permalink
It's true the competition is from South Korea for now. Ironically, Kia asked Japanese car engineers to help them make better cars a decade or so ago. And to think the S. Korean won't buy a Japanese car. In the meantime, I have an ethics issue with these cars being made in N. Korea giving the government dollars and sold here. It's an odd contradiction. As far as Honda, I think they're well made but the styling was never my cup of tea, save for the S2000 and a few other specials.
Three Deuce wrote on January 14, 2013 - 2:10pm Permalink
Nicolas, you need to cite your sources for the claim that Hyundai/Kia are built in N Korea. There is till a lot of bad blood on Korea's part over the Japanese oppression of the Koreans during the Japanese Imperial period. China has similar issues with Japan. Regards .... Tre
Three Deuce wrote on January 5, 2013 - 9:34pm Permalink
Hi! John, Glad your ego didn't get in the way of recognizing the care needed in using over the top adjectives. Now if you had used the term fantastic in relation to the Zonda 'Huayra', _ conceived or seemingly conceived by unrestrained fancy. c : so extreme as to challenge belief : unbelievable;_ you would have never heard a peep out of me. Regards...Tre