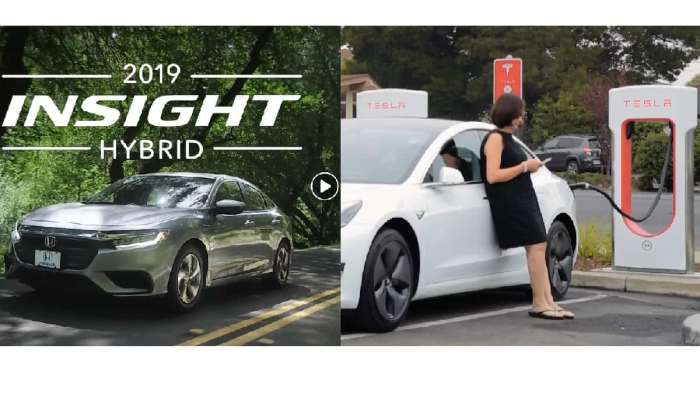 Honda dealers in California appear willing to promote green vehicles with Tesla Model 3 cars in its videos. Here's why.
Advertisement

Honda dealers in Northern California seem to be targeting Tesla Model 3 shoppers in advertisements. In an unusual move, Honda's dealers appear to have created a Facebook advertisement that shows a bored female Tesla Model 3 owner hanging out killing time charging her car, while an elated, ecstatic, joyous female driver enjoys the freedom of the open road in her new Honda Insight Hybrid. Let's break down the comparison advertisement (which we doubt Honda America had anything to do with) and see if we can uncover why it was made in the way it seems.

Tesla Is Crushing Acura In Premium Vehicle Sales
Tesla's Model 3 is now the dominant premium/performance sedan sold in America. That single Tesla model now outsells all of Honda's Acura division by about two to one. Ignoring the Model 3, particularly in California is no longer really possible for automakers. So, they are seeking to draw flattering comparisons of the Tesla Model 3 to their own vehicles.

Honda's Clarity Has Failed In The U.S. Market
Honda's Clarity plug-in hybrid electric vehicle (PHEV) has for some weird reason gone from being a top-seller in the EV market in the U.S. to an "also-ran" in the sales race. Honda has moved the remaining (dwindling) inventory to California to mine for green vehicle shoppers where the density is greatest and the payoff (in ZEV credits) most meaningful. That leaves the Insight and Accord Hybrids to serve the green Honda shoppers elsewhere. 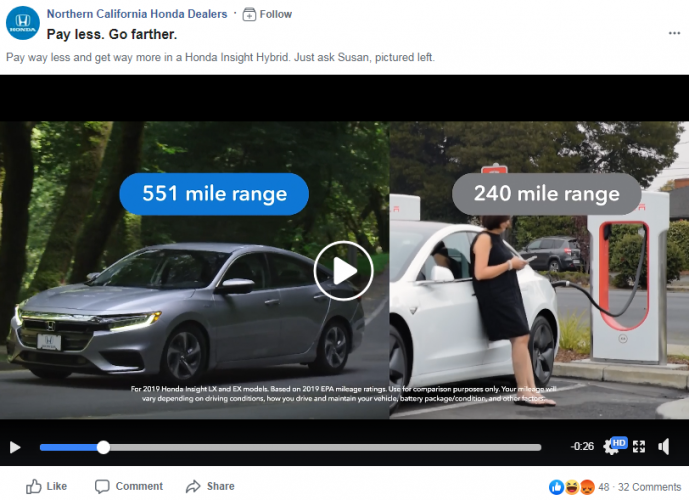 Hybrid Convenience vs. Battery-Electric Hassles
In the video, Honda seems to point out that its Insight hybrid has about twice the "range" of the Tesla Model 3 due to a side by side shot and some inserted screen text. This range comparison is a true fact, and in colder climates, the range could be as much as four times as much. Hybrids have convenience on their side. Fueling one up can be done on any main street corner and the fuel lasts for over 500 miles. Refueling takes under ten minutes and another 500 miles of range are added back. Battery-electric Teslas are re-energized differently. Most owners charge at home. However, many potential vehicle owners don't have houses. They live in other types of residences like condos or apartments where charging at "home" is more difficult, or not possible. Honda knows this. Whoever created this advert (again, we are pretty sure it was not Honda's corporate PR team) would seem to be targeting those types of shoppers.

Tesla Model 3 Buyers Are Almost All Older Males and Big Earners
Tesla's ownership demographics are favorable to Honda. According to automotive data company Hedges, Tesla Model 3 buyers are 84% male. In general, vehicle owners'shoppers are slightly more female than male. In the compact/midsized sean market females are more common. So the creators of this comparison are trying to play to Honda's strength here.

Also, Tesla owners are affluent. They don't think of themselves that way. Nobody does. But Hedges knows (and the comparison creator knows) that Tesla Model 3 buyers on average earn about $128K per year. That is more than double the average income for all Americans. It is also more than double the average family income in America. The Insight starts at about $24K, so the folks that created this advert see the comparison of a Model 3 that has an average transaction price of about $55K as a "no harm" matchup. These two cars are not really commonly cross-shopped.

Honda's dealers also know that the average age of a Tesla Model 3 owner is "middle-aged." About 46 according to Hedges. So, again, showing a vehicle typically owned by an older affluent male doesn't have much chance of hurting a Honda shopper's feelings.

Honda's Northern California Dealers seem to be making a false comparison here to strengthen sales of its low-volume Insight Hybrid by showing it side by side with a vehicle it really does not compete with. Honda can really only win in this image because it is flattering to show a weakness of a great car in comparison to the strength of a weak car.

Look closely at the official Facebook page for the Northern California Honda Dealers, or on its Youtube channel, and you won't be able to uncover this exact side-by-side advert. Either the NorCal Honda folks created a custom teaser, or someone else did. The Honda part of advert is actually the "Save the World" spot created by Honda. How it was co-opted to also show Tesla in the frame with different audio is unclear. Perhaps intentionally so.

DeanMcManis wrote on October 23, 2019 - 1:36am Permalink
Even though the demographics may bear out that most Model 3 owners are affluent, older men, the buyers are also mostly coming from owning lower priced economy cars prior to their Model 3 purchase/lease. So in that regard Honda dealers would be right in trying to keep their current customers from moving upmarket with their next new car. Keep in mind that EVs (including hybrids and PHEVs) make up less than 6% of new car sales in California (which is even less in most other parts of the country), so they are trying to appeal to the same 6% of EV car buyers, while enticing the 94% of today's gas powered car owners, who may be shy about moving to an EV because of bad press and misinformation regularly posted on the internet about the problems and fears of EV ownership.