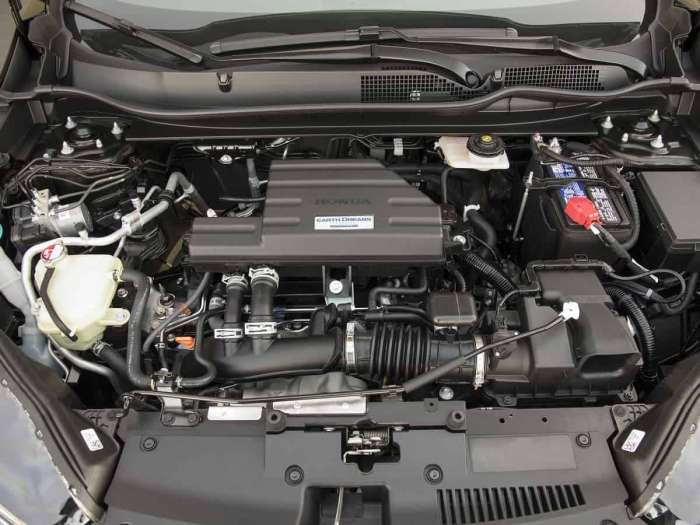 Honda has a plan to address the gasoline in engine oil issue many CR-V owners are struggling with.
Advertisement

Honda America has announced a plan to address the engine oil dilution issue some owners are struggling with. The problem is that gasoline is getting into the engine's lubricating oil. Owners checking their oil find that the level on the dipstick is rising, sometimes alarmingly.

Honda is calling its program a "Product Update." Owners of model year 2017 and 2018 CR-V crossovers with Honda's new 1.5-liter turbocharged engines in certain regions will have their engines modified by Honda dealers at no cost. The problem is linked to frequent cold-weather starts. Honda says that its inventory of components needed to address the issue is limited temporarily. So the product update will first begin in five northern states (ME, MN, ND, SD and WI). Once parts become more readily available, Honda will expand the program to 21 states in all.

Honda dealers performing the free product update will install new software for the engine and transmission control units (ECU and TCU), change the engine oil and, in some vehicles, also replace the air conditioning control unit. Honda says that these updates will allow the CR-V's engine to warm up faster, improving fuel combustion and reducing the potential for abnormal oil dilution. That term, "abnormal oil dilution" is Honda's name for the issue. 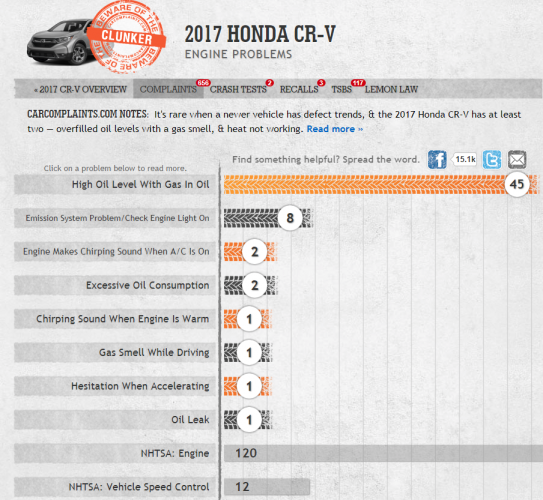 65 owners have reported this issue at the publication CarComplaints.com. Many of the reports have the same basic story. Owners report the issue to dealers' service departments, who call the situation "normal" and then offered no solution to frustrated owners. Owner Jerry D.'s story is typical. Jerry reported in September of 2018, "At 15,000 miles our 2017 Honda CRV oil showed over full and had a strong fuel smell to it. I mentioned this at dealership when having oil changed. The guys at the dealership act like it was no big deal. They were quick to give me a discount on the oil change and told me to check it often. They would not document this. Honda U.S.A. you need to admit that this is a problem and make it right. Will likely be the last Honda we buy if Honda is unable or unwilling to make this right!"

CarComplaints has tracked the issue and found that it most typically occurs between 4,000 and 10,000 miles. On its "Severity Meter" CarComplaints gives this issue a "Prety Bad" rating and has stuck its infamous "Beware of the Clunker" warning on the CR-V.

Honda discovered this issue in China first and addressed it there. The Civic was also part of that program. Although the American and Chinese market vehicles are not identical, they are are very similar. Some U.S.-market and Canadian market Civic owners with the 1.5T engine have also reported the same problem, and same Honda dealership brush off. Consumer Reports is reporting that Honda is not including the Civic in its plan. In Canada, Honda has a more extensive program planned which will include added warranty time. Honda uses its new 1.5-liter turbocharged engine in the CR-V, Civic, and Accord.

Honda seems to have dragged its feet a bit addressing the issue here in the American market, but it is refreshing to see an automaker step forward, admit an issue exists, and offer a definitive set of changes that will correct the problem. Subaru of America should take note.

CygnusX1 wrote on November 2, 2018 - 2:28pm Permalink
Is there any indication yet of the new 2019 Acura RDX having the same problem? Both vehicles now have turbo 4-cyl engines. Acura did away with the V-6 in the RDX for 2019.
John Goreham wrote on November 5, 2018 - 2:08pm Permalink
I have not heard any chatter yet about Honda's 2.0-liter turbo having any issues.
John C Carson wrote on March 21, 2019 - 1:54pm Permalink
Yes See Acurazine
Manel wrote on November 8, 2018 - 4:33am Permalink
Hello, I would like to know if the problem of mixing gasoline with Honda CRV oil in the US also exists in the European market. I live in Spain and they give me turbo model 1.5 in mid-November. Thank you.
Wendell MacKenzie wrote on January 5, 2019 - 10:09am Permalink
Here is my 2 cts worth on this shitstorm for honda. I bought a new 2018 Honda CRV touring in late Sept 2018. Since new (just over 5K miles on it) I have had it to the dealer 3 times for the oil dilution issue. I'm in florida now wintering. Honda america REFUSES to deal with the problem. They initially said parts were on order and the latest excuse is they put a hold on them for some unknown reason. We have 7 CRV's in our family - 2 of which have had the fix done and both are still showing the signs of high oil levels. One just broke down on the road while my brother in law was driving from the east of Canada to Arizona. This problem is real, is serious and Honda better soon address it or they are going to lose a LOT of customers.
Susan Friedman-... wrote on January 14, 2019 - 9:49pm Permalink
I would like to be updated on what is going on. Took it in for an oil change today and talked with them about it today and was shown a video that white washed it.
James R. Cooper wrote on January 26, 2019 - 9:05pm Permalink
I think Honda needs to make it right for owners of these vehicles!
Jackie Hunt wrote on February 9, 2019 - 11:49pm Permalink
Bought my CRV in late '17. I lived in Central & South Texas but I also traveled to colder areas. I have not noticed an issue yet. I have dealt with 2 Honda dealerships & neither have mentioned this problem. All oil changes have been as the automated Honda maintenance monitor required. Honda needs to investigate all US engines of this type & cover all for repair/ replacement. The US Consumer Protection Agency needs to become involved in this issue.
Turner wrote on February 15, 2019 - 11:01pm Permalink
When I retired I wanted to purchase a new vehicle so my wife and me could do some traveling around the country. I chose the 2018 Honda CRV. I had a lot of confidence in Honda at first, now I find myself apprehensive even wanting to go on a long trip. Honda's oil dilution solution doesn't appear to be working even for those fortunate to get the fix. Honda seems more interested in the number of units they produce. As for as the US Consumer agency you can probably forget that since Pres. Trump has gutted the agency as well as many others. In the end I don't think Honda really cares. They are probably just going to do the old two step around the oil solution problem until they design a new engine for the 2020 or 2021 model year.
BHBoston wrote on February 22, 2019 - 9:59pm Permalink
I have a 2018 CR-V and live in Boston. I received the update and the warming up in cold weather has improved by a whole 2-3 minutes, maybe. If it’s under 30 degrees F, it takes a good 10-15 minutes for the car to settle in to warmth. Before that, the heater doesn’t push out good heat, and the engine warmth fluctuates up and down depending on how many lights I sit at, or traffic. And of course, if I’m idling, the engine doesn’t heat up at all, so the auto start is useless. And the colder it is, the more time it takes. I keep a blanket in my car and put it over my lap every day, for at least 15 minutes. Spring can’t come soon enough! As a side note, for the first 8 months of ownership, I was averaging 29mpg, which was great! As soon as I did the product update, it immediately fell to 22mpg, and that’s where it has been for 2 months. I fail to understand how the product update could so severely decrease gas mileage, but it was immediate, and has not changed for 2 months. April-Dec, 29mpg. Jan-Feb, 22mpg. All I know is that this CR-V is a lemon and I’m stuck in the lease for 3 years. Honda is aware the issue still exists but nothing has been done. I’m a Honda owner since 1994...25 years! And this CR-V is the worst. I wouldn’t even recommend a Honda lawnmower at this point.
Kasey Barnes wrote on April 5, 2022 - 1:44pm Permalink
Hello, All So I purchased a 2018 CRV 1.7T used second owner. The Car on every end of the winter the car breaks down. The first time was the Digital module. The second time was the turbo and water pump. This last time it broke I change the sparks and is driving ok. Can this existing problem be cause my car to keep braking down. ????