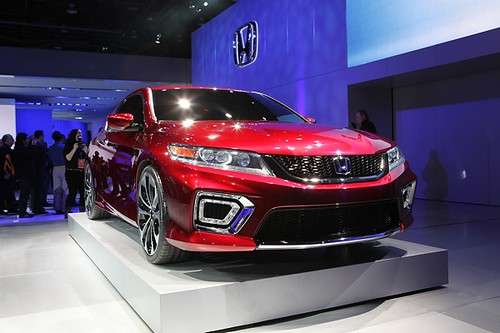 Has The Honda Accord Lost Its Magic?

The name Honda Accord has for decades been the name of the family car in America, but now questions are surfacing whether the 2013 Accord still has its magic.
Advertisement

A perennial sales champion, and auto-magazine comparison test winner, the Honda Accord set the standard for high value, reliable family sedans. However, in its recent "10 Best Family Cars of 2012" Kelly Blue Book did not list the Accord. Yes, there were Hondas on the list, but in the premier spot where the Accord used to be found, the Volkswagen Passat now sits. Is the magic gone?

Honda launched the 2013 Accord Coupe Concept at the Detroit auto show a few weeks back. Although true fans of the car can spot some differences, to the untrained eye the car is basically unchanged. We saw the car in Montreal at the International Auto Show and it qualified only as a “Walk-Past.” Other than the show wheels and some new headlight jewelry, the car could pass for the current Accord Coupe. Will the styling tweaks and engine updates keep it competitive with the huge strides that the Kia Optima and Hyundai Sonata recently made?

There was a time when Honda engines were the breakthrough technology leaders of the entire industry. The CVCC engine from Honda in the 1970s allowed for clean emissions without a catalytic converter. The VTEC engines in the 1980s from Honda introduced variable valve timing to the masses. In the 1990s Honda offered normally aspirated (non-turbo) engines with more than 100HP per liter in the S2000 sports car. It seemed like the march of technological dominance would never stop. But it did. While Honda focused on making the four-cylinder, 2.4 liter engine its mainstay, and offering a V6 for the few customers who wanted a powerful Accord, many of the competitors moved in a different direction. First the Passat offered a direct injected turbo gasoline engine. This engine had strong pulling power off the line, more power than Honda’s 4 cylinder engines, and delivered fuel economy beyond what available V6 engines could offer. The cheeky Germans then pushed the TDI clean diesel engines into the American market. These produce torque and power that brings a smile to the faces of enthusiasts and has fuel mileage only hybrids can match. With diesel and premium unleaded now the same price, the fuel economy of the diesel is fantastic. Volkswagen and others also produced dual clutch transmissions that made the most of the torque and improved fuel economy.

The 2013 Honda Accord Concept 4 cylinder offering showcases what Honda calls the “Earth Dreams” engine. It will have direct fuel injection, but his is now commonplace and available on the Hyundai, Kia, Buick, and Volkswagen competitors. The automatic transmission will be a constantly variable unit (CVT). CVTs are the bane of enthusiasts. However, to Honda’s credit a 6 speed manual will be offered and Honda’s manual shifters have long been considered the best in the industry. The V6 will continue with modern direct fuel injection and be mated to a 6 speed automatic, so there will still be a fast Accord available. Honda may have been looking over their shoulder at Toyota, who’s all new Camry retrained its V6. One advantage of having the V6 is it allows for advertisements to show a big horsepower number to get folks into the showroom.

The Honda Accord has started to loose comparison contents sponsored by auto magazines and is now is losing its coveted spots in 10-Best lists. The new Accord concept shows many new features for Honda, but unfortunately it is hard to see any of the new changes in any light other than catching up to the competition. That being said, let’s not count out the Accord until we can drive it. Even more than its fantastic engines of the past, what has always made the Accord special is that the sum of its parts are greater than the whole.

Anonymous wrote on March 7, 2012 - 1:56pm Permalink
Has The Honda Accord Lost Its Magic? ---------------------------------------------------- The 'reliability magic' has been lost for nearly fifteen years. Major transmission issues noted since 1998 across many models (especially 2003 V6 Accord). Excessive oil consumption problems surfacing on 2008 Accords (4-cyl); premature rear brake pad wear on 2008/2009 Accords, and uncomfortable front seats noted since 2004 (2011 Accord) among other items. Long-time owners experiencing 'issues' they had never had with their earlier Accords....
Aaron Coolings wrote on December 13, 2012 - 10:08pm Permalink
Hmm, I went from a 1996 Nissan Maxima V6 (auto), to a 2006 Honda Accord I4 - manual transmission. I've only had it for ~ 6 months but here's my observations: On paper, the acceleration is the same for 0-60. For the 1/4 mile the old Maxima wins out by 1/2 a second. Is that a big deal? Not at all. Besides, I'm not a racer. I am quite impressed with the acceleration and throaty exhaust note of the 4 cylinder, when you wind it up. The fuel mileage has been impressive as well. On the highway, it's quite refined for a 4 cylinder and certainly wouldn't consider it noisy/buzzy. Yet, what I do miss though is the smooth/effortless acceleration of the V6, within the city. Whereas the 4 cylinder just sounds somewhat buzzy until you get up to speed (3rd,4th gear). I realize that's the nature of 4 cylinders, so it will take some time getting used to. It's been quite awhile since I've had a 4 cylinder car. Besides, you tend to feel like a bit of a prick winding up the gears within the city, just to get up to speed ;) Oh well, the good news is my fuel mileage is much better than the Maxima and the handling isn't too shabby at all. I'm still happy with my choice and feel it will be a car that will last a long time, knock on wood. Yes, I agree 2003-2005 had/have issues, same as 2008+. Yet, 2006-2007 were/still are, good years for the Accord. With the exception of their V6-Autos which have had issues. The V6-6spd would have been a blast to drive, yet for some reason I'm trying to tone down my desire for quick cars and leaning towards sipping less fuel.
Anonymous wrote on March 12, 2012 - 2:02pm Permalink
My last 3 cars have been hondas, 2001 CRV, 2004 Accord, 2006 Odyssey. Love the brand but it has just become too boring for me given the competition. I was ready for something different to replace my 2004 Accord so I just bought a new car this weekend..a 2012 KIA Optima...beautiful car! I may of waited for the 2013 Accord this Fall, but after seeing what a fiasco they did with the CIVIC, I don't believe the 2013 Accord Sedan will be any major redesign..still boring. Honda better beware as they are losing many of their longtime loyal customers like myself.
Tony wrote on April 25, 2012 - 1:15pm Permalink
it wont take long for you to want the accord back. I did the same thing, traded my boring accord for an optima. the optima engine is buzzy and just not silky smooth like the accord engine and trans. I'm not at all happy with the interior which I liked at first, but now the buttons all seem to be in the wrong place and the car is just noisy and bumpy whenever I drive it. Gas mileage is okay but the accord was better. I never had a problem with my accord, all it ever did was go oil change to oil change for 160,000 miles. This optima wont get the chance to go that far, i'll dump it whenever the money side of a new deal works though I already have seen that optima trade values are horrible. my accord brought back $5,000 with all those miles, I'll be lucky to get that much when the optima is 3 years old. what a mistake I made, I feel like a dope.

Tesla Giga Berlin's New Hurdle: It's Not Only the Gov't, but Now Tesla Itself
Teslas Are Sold Out Until 2023, But The Timing May Reverse
END_OF_DOCUMENT_TOKEN_TO_BE_REPLACED