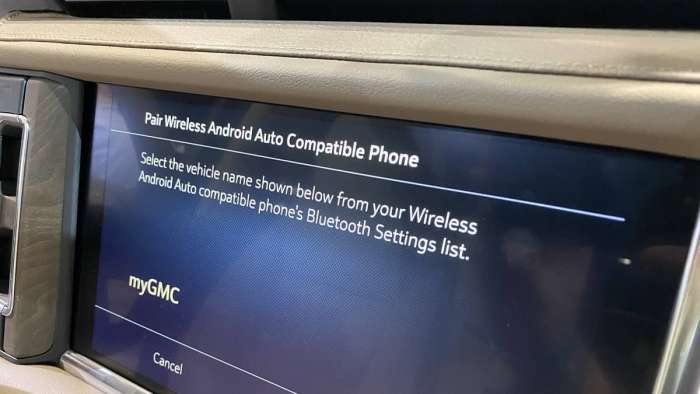 Without making a lot of noise, or any noise for that matter, General Motors added wireless Apple CarPlay and Android Auto its newest line of full-size SUVs. Yes, the Escalade, Yukon, Suburban, and Tahoe for 2021 now can connect to your smartphone wirelessly. This enables full-screen functionality and a much more complete integration than Bluetooth.

Prior to GM releasing the technology without a peep, we were under the impression that only BMW was offering wireless Apple CarPlay and Android Auto this year. BMW made a press release on its integration and created a full fact sheet with an image for the press. GM said nada.GM didn't even have an image when we reached out for more info.

We found out about the big leap forward by GM via our friend Chad Kirchner. Chad is a fellow content provider who recently did some digging at the GM booth at the Chicago Auto Show. We spotted his images, including the one above, on his great dailyTwitter feed and he was kind enough to grant us permission to use the photos. Thanks, Chad!

GM Qi Charging
GM also uses wireless Qi charger pads in its vehicles, so owners of the 2021 GMC Yukon, Cadillac Escalade, and Chevy Suburban or Tahoe will no longer need to connect their phone to any type of cord in their new rides.

If you have not used Apple CarPlay or Android Auto, you are going to love it. The integration makes using apps like Google Maps, Waze, and Pandora much easier and safer. A study by AAA found that these smartphone integration tools reduce distraction.

Look for the new full-size SUVs from GM to begin appearing in dealer showrooms mid-summer.

John Goreham is a life-long car nut and recovering engineer. John's focus areas are technology, safety, and green vehicles. In the 1990s, he was part of a team that built a solar-electric vehicle from scratch. His was the role of a battery thermal control designer. For 20 years he applied his engineering and sales talents in the high tech world and published numerous articles in technical journals such as Chemical Processing Magazine. In 2008 he retired from that career and dedicated himself to chasing his dream of being an auto writer. In addition to Torque News, John's work has appeared in print in dozens of American newspapers and he provides reviews to many vehicle shopping sites. You can follow John on Twitter, and connect with him at Linkedin.

Tsingshan's Threat to Tesla: EV Maker Is In Battery Crosshairs
Tesla-Funded Research Reveals One of The Biggest Mysteries of EV Battery
END_OF_DOCUMENT_TOKEN_TO_BE_REPLACED