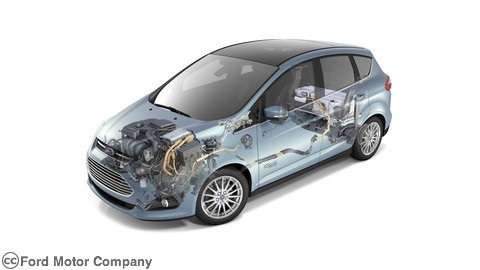 Ford and General Electric’s collaboration on alternative energy vehicles has a surprise if one looks deeper. The "alternative" is not necessarily a green power source.
Advertisement

General Electric has committed to purchasing 2,000 Ford C-Max Energi Plug In Hybrids (PIH). Back in 2010 GE committed to migrating half of its fleet to alternative fuel vehicles and to buy 25,000 vehicles that are electric or have some electric drive capability. Previously GE committed to 12,000 Chevy Volts. In addition to the Ford order from GE, Ford is returning the favor by promoting GE’s WattStation chargers and CNG in a Box compressed natural gas refueling systems.

Many people might be aware that General Electric has battery technology and other clean energy technologies that have good synergy with the electrification of vehicles in the US. What many may not realize is that most of the coal powerplants in the US also use General Electric steam turbines to produce the electricity that supplies the nations power grid. The author has stood next to a number of GE steam turbines in the field in operation and has also visited the GE facilities that create steam turbines including the famous Lynn, MA plant. The WattStation gets the glory as the GE product that promotes clean energy, but the truth around the country, particularly in the mid-Atlantic and some Midwestern states, is that much of the electricity that flows into the WattStation, and then into the electric car will be created by oxidizing coal. Only in areas that are coincidentally close to mega-dams, or large scale nuclear powerplants can folks get CO2 free electricity in any significant quantity. Wind and solar contribute only a tiny percentage of the nation’s power. In fact, trash burning plants (which also use GE steam turbines) account for a large percentage of the energy and are the second or third largest contributor to the power grid in many areas. Power from burning trash is always considered “renewable” and often considered green. Here in New England there is more power created by wood fired plants in many parts of the region than solar or wind contribute.

General Electric is about one fifth of the way to its goal of having 25,000 electric, or partly electric vehicles in its fleet. Mark Vachon, vice president of ecomagination at GE, said in a press release, “At GE, we are focused on providing our customers and our fleet with more economically and environmentally efficient vehicles. The Ford C-MAX Energi plug-in hybrid is a great addition to our expanding fleet of alternative fuel vehicles.” The C-Max Energi PIH vehicle is rated by the EPA at 108 miles per gallon equivalent. With a feul efficiency rating that high it is clear why GE is focusing on vehicles like the Volt and C-Max Energi. Both offer the holy grail of automotive green motoring – the ability to run on electricity, but zero range anxiety since they can also be fueled by gasoline at any station in America. There is no need to seek out a special charging station if one needs to keep driving. If a GE WattStation is available, and time permits, the driver can top up the batteries and continue motoring on coal, nuclear, or trash powered electricity. In some limited areas hydro, and/or wind/solar are available to make the vehicle about as green as possible. General Electric is a player in all of those clean energy markets as well as being a supplier of electric car components.

General Electric and Ford have teamed up to promote the electrification of the automobile and GE deserves credit for its efforts to participate not only in the old standby of electric power generation, but also to be part of newer clean energy options.

Nicolas Zart wrote on November 20, 2012 - 10:24pm Permalink
Is this the best of both world or what? Two American companies working together intelligently on a new and modern technology. What's not to like about choice?