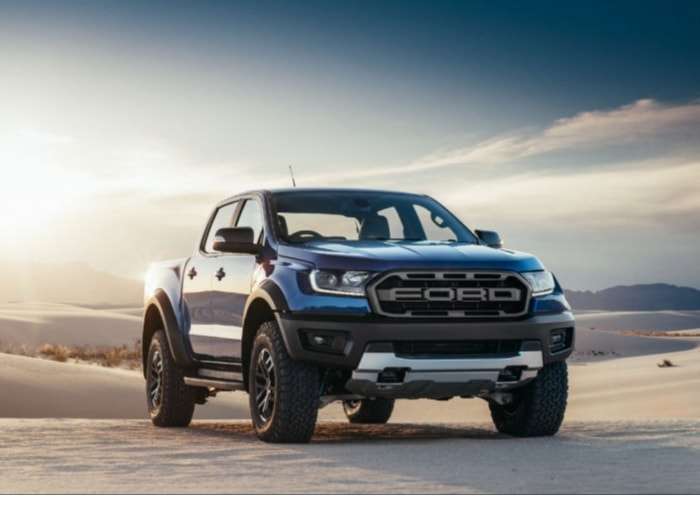 Ford Ranger Raptor Is Coming - Here's How We Know, Specs, and When It Arrives

Other publications are re-posting each others' hopes and dreams. Here are the facts on why a Ford Ranger Raptor is coming to the U.S. and when you can buy it. Also we know few things about the new Ford Ranger Raptor's specs.
Advertisement

The new Ford Ranger Raptor will be a trim for the U.S. market Ranger starting in the 2021 model year and available for purchase by the end of 2020. The way we came to this conclusion is simple, logical, and all the other publications are missing the obvious clues.

What We Know About The 2019 Ford Ranger
Ford has already told us that the U.S.-Spec Ranger is a 2019 model year vehicle that will go on sale in late 2018. Ford is a grownup automaker, so it will launch with a pretty good bang and inventory will quickly build to full production by about early spring of 2019. There is enough pent-up demand for a new midsize truck (any midsize truck) that Ford will easily sell all the “normal” Rangers it chooses to build through the end of 2019 and into 2020 with zero effort.

How Ranger Will Evolve To Raptor
Normally, automakers build a new model, stick to a set offering of mainstream trims, then they build in the specialty trims like a Raptor only after they have settled into a production schedule and sales cycle that will maximize the new trim’s excitement level. It generally takes two to five years for the up-powered, or special ability trims to show up. With Ranger that will all happen faster than with the Chevy Colorado ZR2 and faster than most special trims of any vehicle.

Colorado ZR2, Tacoma TRD Pro, and Ranger Raptor
We know the Ranger Raptor will come quickly because Chevrolet is now selling 12% of its Colorados as ZR2 off-road trucks. That is a huge percentage for a top-trim, and Chevy is printing money with these pricey $50K trucks. Chevy truck fans reserved trucks as soon as dealers would take their money and waited months to get the ZR2. (In the interest of full disclosure you should know the author is a moderator at the Facebook ZR2 owner’s club)

The Toyota Tacoma is the market leader in this fully-sold out class of vehicles. If Toyota and GM could build more, there would be more customers to buy them, but both companies are at maximum production levels for the time being. Toyota has an interesting percentage of its own that helps prove the case for a Ranger Raptor. Fully 40% of new Tacomas leave the dealership with some level of Toyota Racing Development (TRD) accessories. Toyota limits the top-spec TRD Pro to 5,000 units per year, or about 3% of total Tacoma sales, but has another TRD Tacoma, the "TRD Off-Road" to bridge the gap between full whammy and milk run trims. (Here's what differentiates those two TRD models)

U.S. Ranger Raptor Timing
The market wants top-trim trucks, and midsize trucks in particular. Ford will look to maximize its investment in the new Ranger as quickly as possible, but the Ranger won’t likely launch with a Raptor trim. Ford will wait until the early adopters who will pay nearly full price are exhausted and then look to build excitement with the new Raptor trim about 18 months after launch. So, we expect a Ranger Raptor for the U.S. by about the end of 2020 at the latest.

Specs – U.S. Ranger Raptor
Are you hoping for a Ranger Raptor to be the fastest truck in the category? If so, relax. The 2.3-liter turbocharged engine will easily make the Ranger the quickest truck in the segment. Like the Colorado ZR2, a Ranger Raptor won’t be any faster than the regular Ranger, just more capable. Will Ford launch it with a diesel engine? Why bother? The low-end torque of the 2.3-turbo is more than enough for the Ranger Raptor and towing is not an issue. Remember, the Tacoma TRD Pro is already a more capable towing truck than the Colorado ZR2 diesel, which only has a 5,000 lb capacity. A 2.3-liter-equipped Ranger will match that rating easily.

So there you have it. The Ranger Raptor will definitely be a U.S. spec trim about 18 months after the new 2019 Ranger is established at dealers and we even told you the engine specs.

Image shown is the production version of the Ford Ranger Raptor for the Asia-Pacific market.