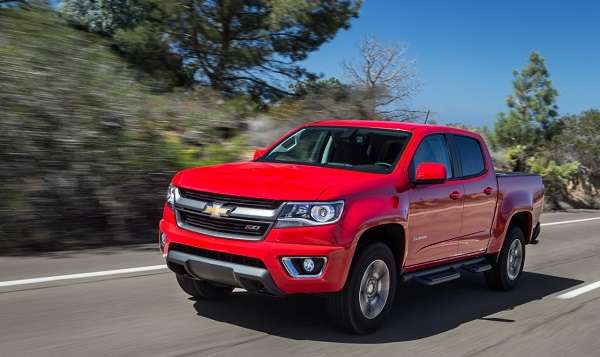 Motor Trend is certainly spreading the Truck of the Year Award around, but Ford losing this one is a shocker.
Advertisement

The 2015 Ford F-150 pickup will be new and improved in so many ways it is hard to count them. The whole of the media is focused almost solely on the fact that shiny parts of the F-150 are all aluminum now. The frame is also all-new and is stiffer, stronger, and lighter. The lighting is amazing. The truck has an all-new smaller V6 EcoBoost engine that I heard Ford’s chief Engineer Pete Reyes call “a gem.” Fuel efficiency will be improved dramatically. All this was not enough to win the F-150 truck of the year.

Motor Trend Picks 2015 Chevy Colorado
As you may have heard, the 2015 Chevy Colorado is instead the Motor Trend (MT) favorite. MT is being very careful to spread the award around. Since 2011, the Chevy Silverado, the Ford F-150, The Ram 1500 and now the Chevrolet Colorado have won the award. That pretty much completes the lineup of top selling trucks.

Size Matters
What Motor Trend liked about the Colorado so much was its size. The editors went on at length about how the Colorado is, feels and drives smaller than the Silverado. The Toyota Tacoma also is, feels, and drives smaller than the Silverado, and has for years. However, we are not expecting any Toyota wins from MT in the truck world. Who needs millions of angry ‘Muricans flooding the e-mail box with spite? There is also the fact that the new Colorado and Canyon’s V6 engine gets better fuel economy than the Tacoma’s 4-cylinder. So it is not like Toyota’s smaller than full-size truck has broken new ground lately.

Grumblings about new Ford F-150
The Colorado’s win was as much a loss for Ford because Motor Trend called out the F-150 for sloppy handling and was not impressed with the fuel efficiency of the F-150 compared to a diesel Ram. MT says the Ram is 21% more fuel efficient according to its tests. That diesel is more than 21% more expensive in most US markets than the gasoline the F-150 uses apparently was not an equalizer. Finally, MT didn’t like the interior of the F-150. What some see as work-tough and made to be operated wearing gloves, others see as crude and heavy handed.

Don’t let us keep you from the Motor Trend story even one minute longer. If you have an opinion, please let us know which truck you would have picked in the comments below.

Robert wrote on December 3, 2014 - 9:07pm Permalink
It's a cute gesture by motortrend and all, but it doesn't matter what they think here. I love my Tacoma, but it's gonna take more than the Colorado to bring back this market to the days back when the Ranger alone was selling 300k units. The F150 will change the industry if only Ford decides on more aluminum. What happens if the others follow suit. I love the Colorado and if it didn't have that bowtie logo, I'd probably already own one, but I'm the minority. Ford's hurt feelings will soon be forgotten when they start cashing the checks on all those overpriced platinum models they are going to sell. Oh ya, I'm SOOOOOOOO surprised a bunch of automotive journalist picked the diesel over a turbo charged gasoline engine said no one ever. The French abandoning diesels is going to do more for 'murica diesel sales than anything we've ever done stateside.
John Goreham wrote on December 4, 2014 - 9:16am Permalink
Your last sentence is a perfect story title! Thanks. Great perspective.
ab ow wrote on December 6, 2014 - 5:16pm Permalink
MT is a mouth peace for Chevy,or Gov motors, they could put a Dog turd on 4 wheels and MT would say its the best thing they ever drove, I stopped reading MT a long time ago!
youkno who wrote on December 6, 2014 - 7:48pm Permalink
why did the chevy colorado win? because its a chevy. motor trend is so freaking biased towards chevy. every time when its ford vs chevy they always pick chevy no matter what. they are just chevy fanboys.
John Goreham wrote on December 8, 2014 - 10:07am Permalink
It should be noted that in two of the last three years MT picked a Ram truck as their truck of the year ('14 and '13). The Ram (previously Dodge Ram) has won more times since 2010 than any other truck with three wins. No other truck has won more than once in the five years since 2010.
Andrew McCoy wrote on March 22, 2015 - 8:54pm Permalink
I'm slightly biased as I drive an F-150. But what I see happening is a lack of knowledge and understanding of the vehicles. Sorry to state the obvious, but the F-150 is a larger vehicle compared to the Colorado and therefore, will have a lacking of handling. I can't lie, my '99 feels like I'm driving a boat, but then again I'm not driving a sports car. I'm driving a 1/2 ton to drive off road and haul gear. Also, the F-150 is a turbo, which means that at around 2 K RPMs, that V6 is going to spool up and produce a wee bit of horse power. Horse power = lack of MPG, and that means your MPG = how you drive. Of course if I get into a Ford and mash the gas the Ram is going to get better millage. More work should go into choosing the winner of this award. All of that being said, I like both Ford and Chevy. The Colorado is a sweet ride. But these superficial accusations should be looked into. and thought about before being strewn out into the public.