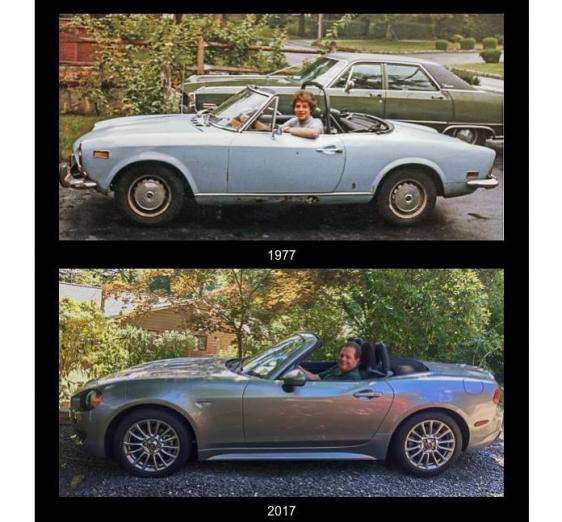 We interview an owner of an original Fiat 124 Spider and a new one.
Advertisement

Torque News is proud to interview Fiat 124 Spider owner Robert Forlini. That's Robert in both of his spiders above. We met Robert at the Facebook Fiat 124 Spider 2.0 Fan Club 2017 where Torque News team members are administrators.

TN - How did you come to have the new Spider
RF - I was very excited when the FIAT brand returned to the USA and bought a 500 in 2012. But of course what I really wanted was a roadster. I followed the news and actually found out about the new 124 before my dealership did. I was the one that told them about it! So when they finally arrived, I was right in there and bought one.

TN - What was your favorite thing about the first one?
RF - Well, my favorite things about both cars are the same: the ride and the looks. And as you can see, I'm a fan of driving with the top down! But specific to the '73, I loved the wooden dash and the instrumentation, everything was gauged. That air horn was great: very European, and everyone got out of your way! I wish the new horn was half as good. I also liked the 2 plus 2 seats, another thing I wish they had been able to design into the new one, although I see why they didn't. No one would really sit in it much, but it was there when you needed it (not unlike the 500).

TN - What is your favorite thing about the new one? Biggest surprise? If you could change one thing what would it be?
RF - I pretty much love everything about the car, including the price, which I think is reasonable. The biggest surprise, I guess, is the power. I like to have it when I need it. and it's more than enough for the street, but I am thinking of adding the Euro Compulsion drive for a little boost. The 124 is also a real attention-getter, people stop me to talk about it all the time. The handling is superb. I also like all of the modern safety and convenience features that of course didn't exist with the older one. Despite the modernization, though, the design is straightforward. It doesn't sacrifice the spirit of classical roadsters (for example, no digital readout instruments). Hmm, if I had to change something? I guess it would be too much to ask for that wood dash or the extra seat back, but I think they could manage to recapture the sound of that air horn!