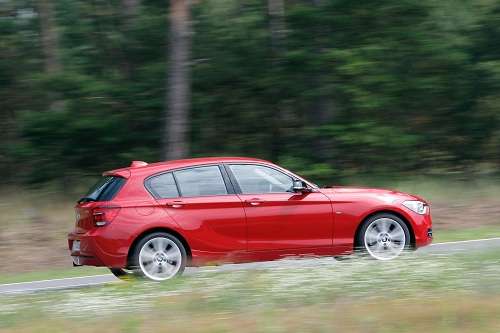 BMW's smallest 5 door sport hatch is going to be quick, all-wheel drive and did we mention a hatchback?
Advertisement

Just days after Audi revealed the 2013 S3, BMW has just released specifications of the new 2013 M135i xDrive. Fans of premium, luxury, hatchbacks that can run with Camaro SS and Mustang GTs from stop-light to stop-light, and embarrass most sports cars on a twisty road, all of a sudden have a choice to make. Even harder for enthusiasts is the fact that the beloved, very limited production 1 Series M Coupe is not in production and BMW is tight lipped about its return.

Although BMW is teasing out the full reveal of the 2013 M135i xDrive, Torque News has compiled facts from today’s BMW press release teaser, and background knowledge to bring our readers this preview. Here are some facts; The new M135i xDrive will have a 6-cylinder, twin-scroll turbocharged engine. The engine will be direct injected and it will have the BMW double VANOS variable valve timing system. The engine will generate 320 horsepower. Translated from geek-speak that means this thing is going to be a rocket. It also means that the Audi 4-cylinder, 300hp engine is looking a little – small? Weak? Neither of those two adjectives are true, but it sort of looks that way on paper. On the road these two cars will run neck and neck.

From the name alone we know the vehicle will be an all-wheel-drive, or in BMW’s secret language, xDrive. That is never a bad thing, but BMW does have this frustrating habit of making the xDrive more for bad weather on dirt roads than for pulling out of a dry turn on a dry fall day. However, the specifications state a 13cm ground clearance (about 5 inches), and BMW says the car will have "M-specific front suspension geometry" , so perhaps BMW resisted the urge to raise the center of gravity on this xDriver. We also know the vehicle will be a 4-door, 5-passenger with a hatch on the back. Hate it or love it, there is no middle ground on the hatchback/small wagon body style. Audi tries to call it “Avant” so it sounds cool, but a station wagon is a station wagon.

The photo shown is a very similar BMW Sport Line 5 door hatch. We will bring you more details and previews as the folks at BMW release more information ahead of upcoming shows.