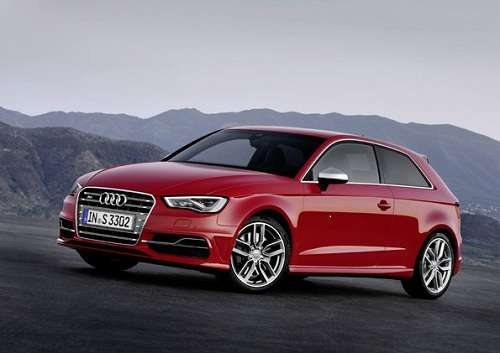 The S3 will debut a new 2.0 liter turbo with 300 HP and many other new innovations.
Advertisement

The 2013 Audi S3 will bring a host of innovations to the smaller of the Audi sport wagons. Foremost on the list is the new 2.0 liter gasoline, direct injected and turbocharged engine. Audi has been developing outstanding, small, four-cylinder turbocharges engines for well over two decades now. Starting with the very popular 1.8 turbos back in the late ‘90s and then progressing through a few generations to the current 2.0 liter motors found throughout the VW/Audi lineup. This motor is all new.

New Audi 2.0 Liter Turbo
The only common element in the new engine found in the 2013 Audi S3 is the displacement at just under 2 liters. Although turbocharged engines can be boosted to 150 HP per liter, it is not commonplace, nor is it easy to make the engine capable of handling that kind of power density. In the S3 the 2.0 liter engine will produce 300 hp. The engine will have counter rotating balance shafts that Audi claims makes the engine very smooth. Although a 6 speed manual will be offered, the excellent S-Tronic, dual clutch manumatic will be the hot setup. This type of transmission can deliver power while upshifting and that means a faster launch. Audi/VW are the leaders in the technology and have been offering it in the marketplace longer than any other manufacturer. Audi has also added indirect fuel injection to the engine. This was made common by Toyota in such performance cars at the IS350. By combining both indirect and direct injection, the engine is better able to reduce emissions and operate at maximum efficiency across all loads.

Audi S-Tronic Transmission
In a compact car this light, the S-Tronic transmission and 300 HP will translate to a 0-60 mph sprint of about 5 seconds. That will put the S3 into the Lexus IS350, BMW 3 series performance group. Audi claims that not only will the S3 achieve strong on-road performance, its gas station performance will be even better. According to a press release Audi is expecting this non-hybrid, gasoline powered performance car to get about 34 mpg.

Making the Engine Cool Is Hot
Audi has also focused attention on the engine’s thermal management. By moving the exhaust manifold closer to the liquid cooled cylinder heads, Audi claims that the engine warms up faster. Catalytic converters work best at temperature so this is an emissions improvement. Also, once the engine is hot, the coolant will reduce exhaust gas temperatures for even more improvements. Audi has made changes to the cylinder head materials and also the overall structure of the engine that reduced wright by 11 pounds. That isn’t much, but every pound in front of the firewall in a car that is front-engine is important in helping to achieve a 50-50 weight division front to rear. In essence, Audi has increased power and reduced weight. That is the two-fer that all manufactures strive for.

Improvements to the Chassis, interior and information technology also are included in the 2013 Audi S3, but the drivetrain is what really makes this car noteworthy.