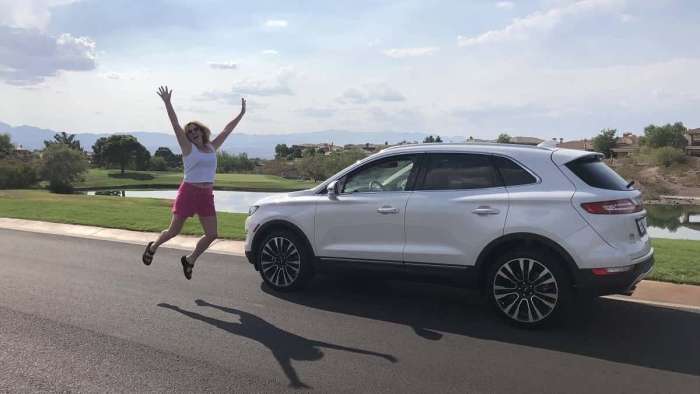 We check in a Lincoln buyer that we highlighted in July to see how the switch from Lexus RX to Lincoln MKC has been going.
Advertisement

Last July, we highlighted the story of Jackie Ferrara who switched from a Lexus RX 350 to a new Lincoln MKC. What was unusual about Jackie's story is that she and her husband didn't own just one Lexus RX, but two. We found it interesting that a Lexus family would quit on the brand and move to Lincoln, so we conducted an interview with Jackie you can read here. With six months having passed, we thought we would check in and see how her experience with the Lincoln has been.

TN - What are the biggest surprises about the Lincoln?
JF - How much I use sport mode. I didn't use it much at first but now I use it regularly in city driving. I would not say I need to use it, but it's fun to use it and allows me to maneuver and pass quickly. I also like having no gas cap lock. Or gas cap at all for that matter. You just open the compartment and there's the gas hole thing.

TN - If you had it to do over, would you have done it or stuck with Lexus, or bought something else?
JF - I could not be happier I left Lexus. I still get to drive my husbands 2016 Lexus 350 and it is definitely quieter in terms of road noise and a little smoother in ride. But it is not more powerful than the Lincoln MKC AWD. The air-conditioned seats in the Lincoln are amazing here in Nevada whereas the Lexus just has ventilated seats.

TN - Tell us what you like about the overall ownership experience
JF - I love the car. The touchscreen is nicer than the mouse in the Lexus, although I got really good at that mouse so it wasn't a problem. The Nav is so easy! You just type in a space bar instead of rolling around and clicking or dialing. I love my big fat tires.

TN - How is the dealer treating you?
JF - I haven't had any problems with the MKC, so I have only been to the dealership once- to get a car wash and pick up my green slip thing. I just got a note to come in for my 5,000 mile check up but haven't done so since I'm about 800 miles from that now.

TN - What are your favorite features of the MKC?
JF - 1.The ability to start the car with the app. I have never had a remote start on any vehicle I owned. Being able to cool the car off before I get to it has changed my life. When it's 110 degrees outside and the car has been sitting all day while I'm at work, it used to take my Lexus a good twenty minutes to cool down. More if I was in stop and go traffic. Now I can hop right in, not burn my legs on my seats, and although the seat cooling feature does not remote start, the AC seats work well within a few minutes. It's very helpful that I don't need to be near the car to turn on the remote start feature.
2. Apple Play. Music played from my phone sounds amazing. This was not the case in my 2013 Lexus. Not sure what magic is happening when I plug my phone in now, but it never sounded this good in the Lexus.
3. The seats. Super comfortable, many adjustments. I like to sit high like I'm driving a bus.

TN - If you could change one feature or thing about the Lincoln, what would it be?
JF - I'll give you two. When pulling forward into a garage, or if you are going to hit anything going forward, an alarm starts to beep. But there is nothing on the screen to tell you where the problems is- right left, side, forward.... However, if I'm backing up the camera shows me where the problem is. With my Lexus, it would show me specifically where I was going to hit by showing me on the car graphic. I called the dealer about it and it turns out the MKX has it but not my model.

The second thing is that one can actually lock the key in the car in 2018. When I did this I locked my phone in it as well so I could not just open the door with the app. The AAA guy could not open the door, either. Yes, there's a code on the door that I could punch in and the door would open. But the code is on my list of passwords (110 long) thaontokeep... in my phone. My husband had to come to the grocery store, I took his car, I drove home, downloaded the app into my iPad and opened the door from home which is about three miles away. The AAA guy was impressed, by the way! Women keep their key in their purse- not their pocket.

TN - Would you recommend Lincoln to a friend? Why or why not?
JF - Yes. In fact, we have new neighbors and they have an MKC.

Our thanks to Jackie Ferrara for sharing her story with us.