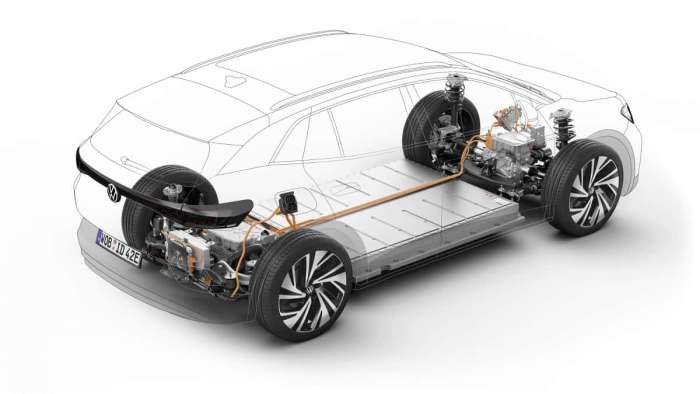 Volkswagen has just announced that its ID.4 battery-electric vehicle is “The most affordable all-wheel-drive electric vehicle on sale in the U.S.” This has us scratching our heads for two main reasons.
Advertisement

This week, Volkswagen announced in a press release that its ID.4 is “The most affordable all-wheel-drive electric vehicle on sale in the U.S.” The announcement surprised us. First, we didn’t realize that the ID.4 was less expensive than the Toyota RAV4 Prime and Mitsubishi Outlander PHEV electric vehicles, and second, we thought the ID.4 with AWD was still months away from production. Let’s break down the facts.

VW ID.4 Price vs. Other Electric Vehicles
VW’s presser headline states that its least-expensive ID.4 AWD Pro has a price of $44,870 including its mandatory destination fee. We checked out Mitsubishi’s current pricing for the Outlander plug-in hybrid electric vehicle, which has been on sale in America for years, and found its base price to be $37,490. Which is less than the VW’s price. We then checked out the top-selling plug-in electric crossover in America, the Toyota RAV4 Prime. Its base price is $39,095. Both the Outlander PHEV and RAV4 Prime have standard AWD. So, from our perspective, the VW ID.4 is not the most affordable AWD electric crossover on sale in America. It may be the third most affordable. But is it actually on sale?

VW ID.4 AWD Pro - Timeline For Sale
The second surprise to us was that VW was selling the AWD version of its ID.4. We thought it wasn’t going into production until this fall. We looked closely at the press release, and it seemed to confirm our thoughts. VW says lower in its press release, “The ID.4 AWD is expected to reach dealers in the fourth quarter of 2021.” So, it isn’t actually ‘On sale” after all. By contrast, when I contacted Mitsubishi’s dealer in my town for pricing recently five were in stock for same-day delivery. Similarly, I have spoken to dealers in my area in the past month who had RAV4 Primes in stock that I could drive off the lot here in Massachusetts if I wished to buy them on the spot without a reservation.

Lower in the VW press release, VW restates its claim with slightly different wording. It says the ID.4 is the “ID.4 AWD Pro is the lowest starting MSRP for an all-wheel-drive battery-electric vehicle in the United States.” We’ve highlighted the slightly different wording. Also, VW adds in the word “Reserve” with regard to how you can conduct a transaction with the company now involving an AWD ID.4. So you cannot actually buy one in the sense that they have one you can take after giving them money. Which is what a “sale” is. A reservation for a vehicle is not a sale.

Here's EV Acronym Decoder If You Need One

We’re fond of VW’s products, and the ID.4 looks like an exciting new addition to the long list of AWD electric crossover vehicles from which a shopper can choose today. It surprised us that VW opted to seemingly exaggerate the ID.4 in order to garner press for it. After all, the ID.4 is presently one of the twenty fastest-selling vehicles in America. This EV tester has never seen an ID.4 in person, at a media event, car show, or on public roads, but we look forward to the opportunity to see one in the flesh soon. And maybe even take one for a ride to check out that AWD system VW hopes to provide at some future date.

Michael Charter wrote on June 21, 2021 - 9:44pm Permalink
I have a Toyota plug-in hybrid and a VW ID4. A plug-in hybrid is not an Electric vehicle. I haven’t seen the press release but you say it says “The most affordable all-wheel-drive electric vehicle on sale in the U.S.” Again a hybrid, plug-in or not, is not an EV.
John Goreham wrote on June 23, 2021 - 5:41pm Permalink
Thanks Michael, as an owner of two green vehicles, your opinion is very valuable to this comments section. I agree with you that early plug-in hybrids were hard to call electric vehicles. However, after I drove the Honda Clarity for 50 miles without using any gasoline, and the RAV4 Prime 42 miles (repeatedly), it became clear to me that the industry and PHEVs have moved into the realm of "electric vehicles." The adjectives in front of "electric vehicle" define which type of EV they are, just like the one adjective that VW used lower in press release defines EVs having only electric propulsion. There are Clarity, RAV4 Prime, and Volt owners who routinely report that they don't use gasoline for weeks or longer, yet drive their vehicle every day propelled by only electrons. In some PHEVs, the rear wheels are only ever driven by electricity. The EPA, green vehicle publications, and many owners consider vehicles that can run only using electricity to work and back EVs. I count myself in that group. Cheers,
jg wrote on June 23, 2021 - 1:29pm Permalink
Not a surprise that VW would deliberately misstate facts in press releases to create the illusion of “first in class” products — wasn’t lying what took away their market share in the first place? So not surprising they would use the same tactic to try and get it back. Seems like at some point they would figure out what turns off their potential customers. With all their brands making such monumental progress in the battery electric vehicle realm, what IS surprising is that they would think they need to resort to deceptive marketing to sell their vehicles. Seems like they could stand on their own merits, but except for research I’ve done personally keeping up with the industry, I haven’t seen any VW marketing. Maybe their name is so tarnished in the US they figure that anything they say will be used against them.