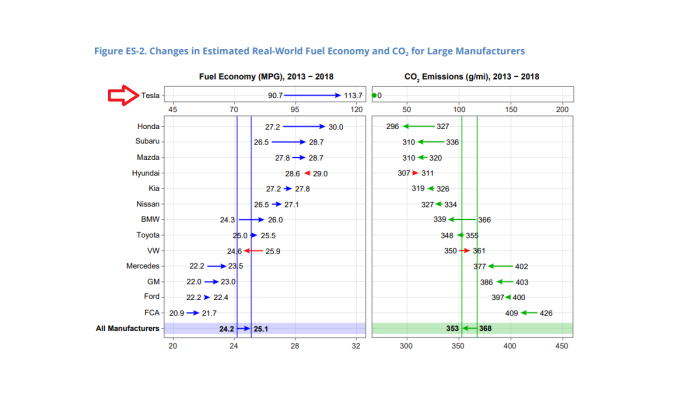 EPA Report Finally Shows Tesla's Dominance In Efficiency - How Did Honda and Toyota Do?

A new efficiency report produced by the EPA shows Tesla's dominant lead. Here's what the EPA has to say about Tesla, Honda, and Toyota.
Advertisement

A recent report by the Environmental Protection Agency (EPA) shines a spotlight on the 2018 model year efficiency and CO2 output averages by brand. Tesla is for the first time the highlight of the report. 2018 was a very big year for Tesla with its top U.S. sales tally coming in December of that year. Tesla's meaningful sales rate now moves it into inclusion in this report with other brands. To be included a manufacturer must sell 150,000 vehicles in the year. Both Honda and Toyota also had a meaningful improvement reported in this report. 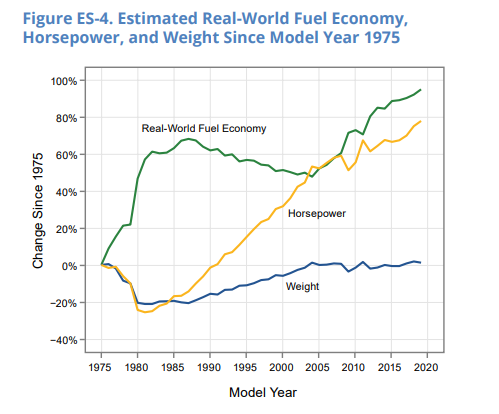 Tesla's Dominance In EPA Efficiency
The top-of-page chart shows just how dominant Tesla is with regard to efficiency and CO2 tailpipe emissions. Tesla's efficiency rose fro about 90 MPG to 113 MPG. EPA typically used MPGe for these values, but has dropped the "e" for this report. The closest competitive brand, Honda is about a quarter of that efficiency. The chart's scale had to be fudged to include Tesla the efficiency is so much better than the remaining brands.

Honda's EPA Efficiency
Honda showed improvement as well and is ranked as the top brand with a wide variety of vehicles. Unlike Tesla, Honda makes vehicles in almost all price points, and in almost all shapes, styles, and sizes. Honda's overall efficiency rating has moved up to 30 MPG. Its CO2 rating is now under 300 grams per mile. Honda's performance here is very impressive given that it produces pickup trucks, minivans, and has robust three-row crossover sales.

Toyota's Efficiency
Toyota is arguably the most efficient full-line, large-scale company in the country. Nissan may also feel it can lay claim to that, but its truck sales are significantly smaller and its minivan sales significantly smaller. Both Toyota and Nissan continue to see improvements in their efficiency, but the fact that they sell so many large vehicles hurts their average when compared to companies like Hyundai, Subaru, and Mazda.

EPA Now Includes Tesla
The EPA didn't hold back Tesla's results in this report. In the EPA's executive summary, the EPA said of Tesla, "Since Tesla produces only electric vehicles, they had by far the lowest tailpipe CO2 emissions, at 0 g/mi." It seems that the EPA could have singled out Tesla for more praise, but that's not its style in such reports. 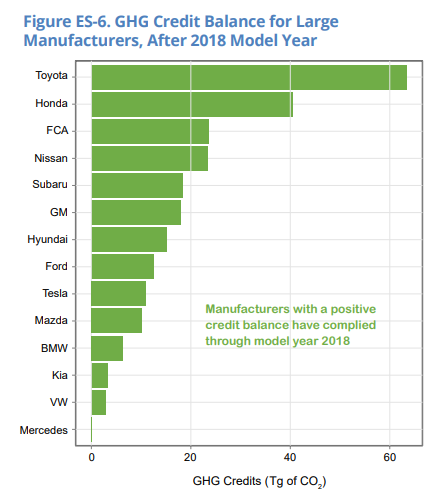 Record Efficiency and Record Low CO2 Production
The U.S. vehicle fleet continues to show impressive gains. Fuel efficiency is at a record high. CO2 production is at a record low. This despite the U.S. vehicle fleet remaining at historically high levels of sales. Another interesting fact is that horsepower and efficiency have both been rising together at about the same rate for two decades. Greenhouse gas credits are also an important factor EPA tracks. Toyota dominates with the most EPA credits overall. Toyota has as many GHG credits as GM, Ford, and FCA combined and about five times Tesla's count.

If you are interested, here is what we reported on last year when the EPA report was published. Are you glad to see Tesla being included in these EPA reports? Tell us in the comments below.

Charts courtesy of the EPA. View the full report here.