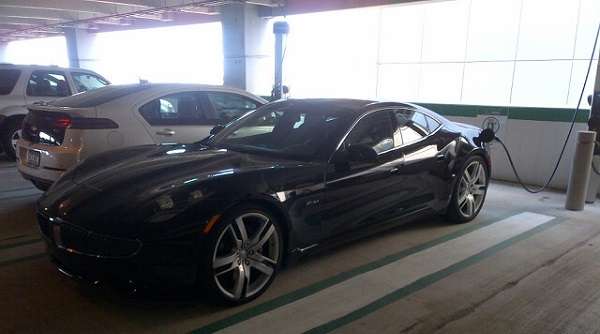 Is it bad EV etiquette to leave your car plugged in at the airport for a week? Should EVs be able to park at the charger and not be charging?
Advertisement

Imagine yourself an EV owner heading out on a business trip for 2 days. Your new Nissan Leaf EV has a range that can get you to the airport, but not also back on a single charge. This is not that unbelievable. A reader of ours recently wrote on our comments under a recent Tesla story that he has a 100 mile – one way – commute each day. So it is not outside the realm of reality that a Leaf owner might also be 75 miles from an airport.

So, back to our story. Upon arriving at the airport the stalls for charging are all occupied. Bummer. However, as luck would have it a nice young lady walks to her EV, unplugs and pulls out just in time! You slide your electric car into the slot, and notice that there is a Tesla to your right and a Fisker Karma (more rare than a baby pigeon) on the left. The Karma has plates that say “INSTNT.” Cute.

Upon returning, your Leaf is pre-conditioned, toasty warm and fully charged up. Approaching the car you now notice that the INSTNT Karma is still there and thickly coated in that airport jet fuel dust. That makes you wonder how long that car with the range extender is going to take that valuable EV charging spot. Is this bad EV etiquette? Would it matter if the car was a Volt (also an extended range EV) or a Honda Fit EV? Maybe the INSTNT was out of gas and needed the charge. Would that make it OK?

With EVs selling in the 70,000 or so per year range in total in the US fighting for spots at airport or other chargers has not yet progressed very far. In fact, when BWM conducted its i3 study it learned that not many EV owners were using charging stations at all. Maybe because there weren’t many to use. In any case, it resulted in BMW adding an optional range extender to the design and including a loaner program for gas fueled BMWs for i3 owners.

On some forums and blogs we follow charging behavior is starting to become a hot topic for discussion. Here are some other quick scenarios we came up with that deserve a debate:

- Toppers – EV owners that pull into the EV slot at 75% battery strength close to home (let’s say at work) to get the “free” electricity. Should that spot be left in case a another owner shows up and needs it to get home?
- Faux chargers – EV owners that take a charging spot not needing to charge, but because they prefer that space so close to the door of the airport terminal. For this scenario let’s add the very real Boston mid-week situation where parking in the distant overflow lot and taking the shuttle back to the terminal area is the other choice.
- Bonders – How about the owner of the EV who just wants to feel the love and park with their buddies at the charging row close to home? Show of strength, socializing, or just selfish?
- Pretenders – We would not have come up with this on our own, but according to the forums there are people who park EVs at charging spots and don’t even plug in. Did they forget? Are they crazy?

We won’t name names, but on the EV fan forums people are naming names. On one EV fan site a debate started when a photo showing an expensive EV taking a valued charging spot but not plugged in. There were over 25 comments about it. Nobody defended the offender. One commenter, Al said “Unfortunately ignorant people and jerks (or both) are allowed to buy Evs (the specific name of the EV is omitted by author). This kind of thing will never stop. In the case of ignorance a polite note on the car may help. In the case of jerk, nothing but enforcement (towing, monetary fine) will work.” There is much debate as to which type of EV car is the most common culprit parking at an EV charger and not even plugging in. Tell us what you think about EV charging etiquette. Have you ever needed a boost and the spots were all taken with one of the above types of bad behavior chargers? What should be done?

Photo taken by author at Boston’s Logan airport. The cars shown on the chargers were both at those spots when the author left for a family vacation, and were still there upon return a week later. The plate INSTNT is fabricated to make the story flow. No offense intended.