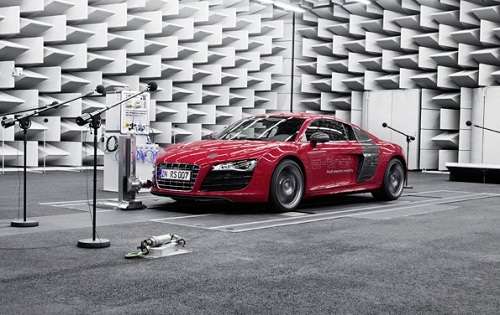 Electric cars need to alert pedestrians of their approach and Audi has developed a sound signature it call e-sound to do the job.
Advertisement

For decades the auto industry had one concern about automotive noise – getting rid of it. Both inside and out, the automakers employed engineers and designers to rid our vehicles of the first of the three deadly sins knows as NVH, noise, vibration, and harshness. This effort peaked with many automakers, notably Honda, employing sound generators to create frequencies out of phase with noise made by the car’s normal operation to thereby offset the frequency and nullify it. The trend has come full circle as car makers now add noise to electric vehicles.

The Sound of Silence
A few years back one of President Obama’s first enacted laws related to automobiles was the Pedestrian Safety Act. This law was intended to require vehicles to emit a minimum noise level to alert the blind and pedestrians in general of a vehicles approach. Intended mainly for electric vehicles, the law will require sound generation by these types of vehicles. Audi has been working to meet the requirement, and like all of its undertakings it isn’t following the easy path and just adding a buzz

e-sound
In order to add a sound signature to its vehicles that will define them audibly, just as the body design of all Audi products says “Audi” to the eye, the manufacturer has enlisted a team of experts. Working in a laboratory that would be diminished if called a sound-lab, the team has first studied what sounds an Audi electric car already makes. Early on it was determined that the sounds generated by the electric drivetrain were too quiet, and too high in frequency, to be simply be amplified. Therefore, all Audi electric vehicles, known internally as e-tron models, will need to generate a synthetic sound signature Audi has dubbed e-sound.

A Team Driven Approach To Sound
Creating this sound was a task overseen by Audi’s Head of Acoustics, Dr. Ralf Kunkel, who points out that “Good sound design is a complex endeavor.” Creating the actual e-sound is the job of Audi engineer, and musician Rudolf Halbmeir who believes that a car's sound is similar to music. For the Audi A8 e-tron the sound created is considered great by Halbmeir. The A8 gasoline powered car has one of the best sounding engines in the world and is truly made greater by that melody. For the A8 e-tron the sound of the car the team came up with is a purr at light throttle growing into what Audi terms a cultivated growl. Inside, the sound is kept quiet and calm in keeping with the automaker’s feeling that an electric car should convey peacefulness.

Perhaps due to concern that its buyers might think badly of a simple “recording” being played more loudly as speeds increase, Audi developed a system that generates the sound based on a number of inputs from the e-tron’s engine. Dr. Lars Hinrichsen, the team’s software and hardware expert explains ““Data relating to the electric motor’s rotational speed, vehicle speed, loads, and other parameters is continuously supplied by the vehicle to the control unit. It then uses this data to generate sound.” This sound is then channeled through a 40 watt loudspeaker under the car.

Audi has advanced the electric car segment by putting in the time and effort to define and brand the sound signature of its line of e-tron electric cars rather than take the easy path to meet government regulations.

Aaron Turpen wrote on April 6, 2012 - 2:35pm Permalink
Can't wait to have a car that has these dumb "pedestrian alert sounds" so I can hack the module and make it play Pantera instead. :)

Elon Makes a Cybertruck Statement With an Action, But Quiet in Words
Tesla's Record Month in China: Doubled Registrations in March 2021
END_OF_DOCUMENT_TOKEN_TO_BE_REPLACED