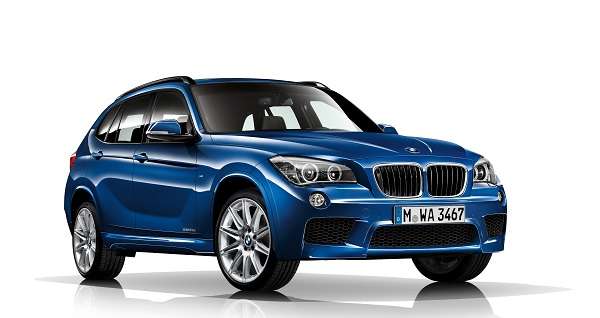 The 2014 BMW X1 wants so badly to be a compact, sporty, luxury crossover, but it is really just a small BMW. Is that a bad thing?
Advertisement

The 2014 BMW X1 XDrive28i is very much a BMW. Having spent a lot of time in BMWs lately I am beginning to become familiar with the good and bad features of the BMW 1 Series, 2 Series, 3 Series, and now 4 Series platform. The same basic architecture underpins all of these cars and they all have the same or similar powertrain options. This past weekend I spent about four hours putting a brand new (3,500 miles on the odometer) BMW X1 through its paces on the highway, on back roads, and in the city. I drove the little all-wheel-drive hatchback in the snow and also in dry conditions. I used it to go on a date and to take my son and a friend to a bantam hockey game. This is pretty much I all ever do with any vehicle and I think I can give a potential buyer a pretty good understanding of the vehicle.

Let’s start with the size of this thing. Since it is based on BMW’s smallest offering in the US, the 1 Series, it is small. The X1 is smaller than a 2014 Toyota Corolla in the front and back seats. If you are thinking you will buy the 1 Series and it will be like a 3 Series, or X3 since only you will be in it most of the time, you are wrong. Up front the headroom is great. I am 6 feet tall and in terms of perceived space around the head the car feels great. However, I am 190 pounds and in decent shape. Yet, my bottom was too large for this car’s front seat. The seat is too short in terms of its front to back length and also its width. The end result is this seat feels like a bar stool under you. If you are a smaller man than me, maybe you will fit. If you are a woman, you should be sure you are being honest with yourself about the fit of this seat under you. Bear in mind I owned a 2007 Miata and the seat fit me just fine.

The car is also narrow. There is not enough width for 2 cup holders, even staggered. So BMW hangs one off the passenger side of the center console like an aftermarket add-on. It looks cheap and likely to be broken off. There is also not enough room for a proper right-arm armrest. Instead there is a sort of small console. The front seats when used for just two passengers are OK and legroom is fine. However, add a third person in back and you have issues. Even if that someone is a 3 year old in a fixed car seat. Adding in a rear passenger means the front passenger has to move up. Now this “luxury” car is not so comfortable anymore. It is cramped. Maybe in Europe they’re cool with that. Here in the US we are not cool with $40,000 passenger cars being cramped.

The rear cargo area in pictures looks great. It looks like a crossover (sport-ute). In person it is not like that. The cargo area is small and at best can be described as a small hatch-back. It is small like a Mazda 3 hatchback or Lexus CT 200h. In fact, I think those are this car’s two closest soul mates. If you are thinking this vehicle is Toyota RAV 4 sized you are way off. Putting a hockey bag into this car requires that 2/3 of the rear seatbacks be folded flat. That leaves just one rear seat available. In terms of cargo capacity this is a fine small car. However, one must compare it to a small car, not any sort of “crossover” or “sports activity vehicle.”

OK, so I keep calling it a “car.” And you are a BMW fan and want this to be a crossover. So you are annoyed at me. Complain to BMW. In their monthly sales breakdown this vehicle is grouped with the other BMW “passenger cars” like the 1 Series and 3 Series. BMW does not group this thing in with the X3, X5 vehicles. So it is a 5-door hatch-back car, like it or not.

Like all BMWs, this vehicle’s single biggest strength is its chassis. The car is nailed down, brick-like, all that. It is solid and feels like quality. Handling in the dry, the wet, or even in snow is really near perfect. However, the steering is all wrong on this car. Many writers point out that the X1 was the last vehicle in the BMW line, and actually one of the last cars sold in America, that had hydraulic steering. Too bad, since the steering is so stiff it makes the car a hassle to drive. Straight ahead is good, and long sweepers fine. Drive in the city and it gets to be a bummer very fast. Try to do a K-turn on a city street, or parallel park it and you will curse this car. The steering was much stiffer than any new 3- series I have ever driven and I think I have driven 4 in the past 6 months.

Over bumps the car I drove was decent. Not too severe. It had the 17 inch diameter, run-flat tires. I would caution any driver to be sure to try the larger diameter, lower profile wheels before committing to them. I have been in and out of BMWs this past year and on real roads the low profile “upgraded” wheels are too harsh.

In the US, the most popular selling BMW powertrain is the 2.0 liter turbocharged, four-cylinder engine. In BMW model codes that engine is denoted as “28i” in the model number. Having driven this engine in the 328i, and also an X3 xDrive 28i, I can say that given its decent fuel efficiency, 240 HP, and good torque curve that it is a perfect engine in the X1. It does use premium unleaded, which will add about 10% to your per mile costs. The X1 I drove had an 8-speed automatic transmission that was good at matching the needs of the driver with the engine’s capability. However, no paddle shifters? Corollas costing literally half what this car costs come with paddle shifters now, and those have a CVT! What is BMW thinking?

My biggest disappointment in this car is that the engine and the transmission conspire to create a second of nothing when one is at a stop and tries to start off quickly. For example, when stopped waiting to turn left across traffic on a 45 MPH roadway. The car’s slight turbo lag and dull spot in first make this car a bit spooky. You step on the gas and there is an instant of no movement that you would not feel in most cars. Add in the stop-start function and it is even more pronounced. I test-drove the X1 with the stop-start off because I don’t like it. When using it the car shudders to a start.

Compared to the BMW X3, which costs about $6k more when similarly trimmed, the X1 lacks more than just usable space. For example, in the X3 there is room in the instrument cluster to show the next turn distance and direction information from the Nav. It works well since your eyes can move to that spot much better than over to the Nav screen. In the X1 the instrument cluster is too small, so that very useful feature is not present. Speaking of not present, this car does not come with a back-up camera, nor did the X3 bought new nine months ago I sometimes drive. Why? Is it too much to ask that BMW add a feature found in every economy car in America? The X1 we drove had navigation and a ginormous moon-roof with a power operated shade. This was not a bare-bones car.

The car did have some cool features. The headlight washers were great. We went through 2 jugs of washer fluid during our drive and the headlights stayed bright. The heated steering wheel and seats are so powerful that the car’s heater is almost not needed. They pump out enough BTUs to actually sustain the heat in the car with the HVAC system off. Wonderful. There is also no blind-spot in this car and a glance out the back actually reveals what is happening back there. Too often headrests and a small rear glass area reduce rear visibility these days.

A BMW X1 with all-wheel drive starts at $33,000 and you will need to add at least a few grand to get leather and navigation. Keep clicking options and you will get to $40K quickly.

In summary, if you have your heart set on a small BMW with surprisingly stiff steering, are smaller than average in size, don’t plan to have passengers regularly, and you are not going to cross-shop this car with either the Mazda 3 or Lexus CT 200h, this vehicle will make you very happy. However, if you fall outside this description, at least drive an X3, and maybe some similarly shaped vehicles made by other brands. You will be glad you did.

Here's What US News and World Report though of this car.

Armand Tirol davila wrote on January 14, 2015 - 2:41am Permalink
To put it simply, you don't need to exercise anymore! Just drive and steer the BMW x1 and you are done! You feel you have Dumbbells in your left and right hands when you steer it at low speed. Drive it on corrugated roads and if you are unlucky you hit a pâté hole , it sounds like breaking the suspension or the car itself! It is a torture chamber for drivers driving in a hell of a traffic! It's a wooden cart or chariot at the time of cleopatra! I drove cars since I was 12 years old and many have no power steering, but I have encountered with this kind of heavy steering! BMW X1 steering is heavier than a container truck! As the critics says " steering is is mildly on the weighty side" oh no! It's mighty heavy! Definitely this is no car for a lady! Space? Gush my Yaris has more space than the BMW x1 with a full blown Spare tire! Many could be fooled by it's looks and badge but this car could put you to shame!