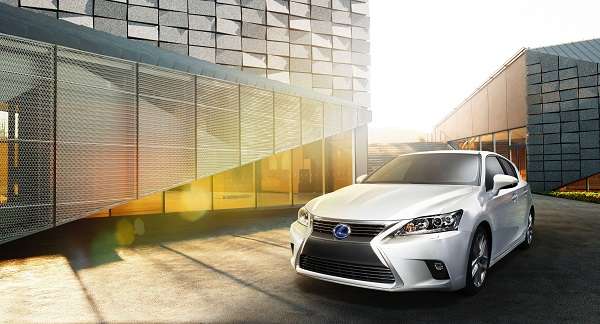 Lexus' low-volume near-luxury hybrid gets the new company uniform for 2014. Many might wonder why Lexus even bothers with the CT 200h, but there is a big reason the car makes sense.
Advertisement

The Lexus CT 200h hybrid will be refreshed for 2014. Currently, the car sells at about the pace of an electric car with about 15,000 being sold in the US each year. That makes it Lexus’ lowest volume car, and lowest volume vehicle aside from the LX sport ute which nobody has ever heard of. However, in the perspective of green cars, the CT 200h is not a failure, but rather a success for Lexus. The reason is that it is really just a parts-bin creation made from parts of cars that sell in much higher volumes.

The CT shares most of its drivetrain with the Toyota Prius. In fact, it shares the entire kit and caboodle, and that is not a bad thing. The Prius sells in the neighborhood of a quarter million cars in the US per year. The added 15,000 Lexus CT 200h models are able to share the economy of scale that makes the Prius “profit-tolerable” for Toyota. Nobody outside Toyota and Lexus knows if the Prius and the Lexus CT 200h really earn the company any profit. However, they sure do help with the corporate average fuel economy ratings and the California Air Resources Board crazy quilt of regulations. The Lexus CT 200h achieves an EPA estimated 42 MPG combined.

The CT 200h satisfies the desires of a shopper who really wants a Prius, but also really wants a car that is fun to drive. I have spent about 1,000 miles behind the wheel of CT 200h cars and it grows on you. It handles like an Audi A3. It feels very solid, and if one prefers it can come with a lot of the entry level Lexus niceties like GPS and a quality interior. Clearly the Prius suspension is not used in the CT 200h.

On a recent Linked-In Lexus group posting a CT owner weighed in on a story about Lexus being the most loved car company. The reader/commenter named Julie F. said “I love love love my CT200h - what a gorgeous car and great for the environment! Lexus support their customers in a way I've never experienced before. Sold for life!” That pretty much sums up the reasons that Lexus makes the CT 200h, even though it does not sell in huge volumes. Lexus can make the car, it is an environmentally friendly green car choice, and customers who own them love them.

In 2014 the refresh adds the new spindle grill to the CT and it will benefit from the change. Although looks are always subjective, sales numbers are not, and the GS and IS sales simply jumped up when the cars received the new nose. None of the other Lexus cars has seen anything but an increase after getting the new styling. The rear is also restyled and new alloy wheels will be fitted. The 2014 Lexus CT 200h will be revealed at the 2013 Guangzhou Motor Show in China next week.