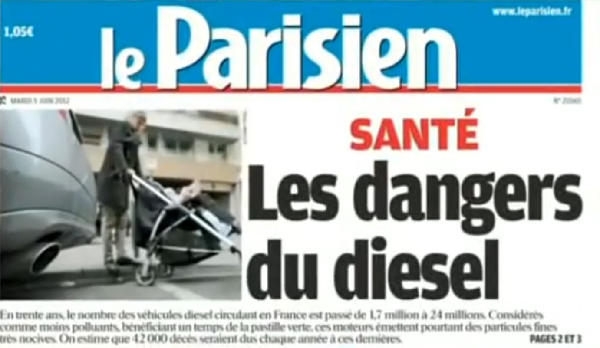 Diesel vehicles are more polluting than gasoline vehicles and do not return better mileage. Europe is finally seeing its mistake.
Advertisement

The tide may have finally turned for diesel in Europe. The myth of “clean” diesel is being challenged by the very same authorities who were previously those greenwashing the dirty fuel for decades. The worst pollution levels in 7 years are now choking Parisians. Paris is cloaked in smog as thick as pea soup and the culprit is in part diesel particulate according the local authorities. Deputy Paris Mayor Anne Hidalgo was quoted by Bloomberg News as saying that “Irresponsible policies” encouraging diesel use, rather than gasoline, were in part to blame. She is just one of many pointing this out.

Diesel is not taxed the same way that gasoline is in France and much of Europe. Diesel gets a lower carbon tax. It needs that in part because per mile driven diesel outputs more CO2, which many blame for man-made global warming. In a separate article Bloomberg highlighted that the French Government is now trying to institute policies that would even-up the carbon taxes on both gasoline and diesel. If that happens the diesel price advantage evaporates and gasoline immediately becomes more economical. Automakers of course are resisting this after investing heavily in the technology they were for decades encouraged to develop.

Gilles Aymoz, the head of air quality service at the French Environment agency Ademe, blames diesel vehicles and wood stoves for outputting the fine particulate that is the main source of the pollution. Other sources named by Mr. Aymoz are ammonia gasses from farming in the surrounding region according the Wall St. Journal. Diesels for decades output much higher levels of fine particulate as a product of the combustion cycle than gasoline.

Newer diesel models have expensive methods to bring fine particulate emissions to within the legal limit, but per mile diesel still produces more CO2 than conventional gasoline engines. The reason that US makers of diesel engines now always call them “clean” diesel is that they were forced by government action to make them stop spewing the black cloud of particulate they were well known for, as well as to bring the oxides of nitrogen they put out down to the same level of gasoline cars. It does not mean diesels are “clean” compared to hybrids or other green cars powered by gasoline, but rather compared to the choking pollution they created until they were until forced to stop.

The myth that diesel vehicles are in some way more economical or greener than gasoline vehicles is one we at Torque News have tried to dispel with fact-based reporting. Not a single automaker in the US market has an affordable diesel offering that offers better fuel economy than the leading gasoline powered car in its class. This isn’t because there are magic cars in the European market we don’t get. It is because (in part) the European test cycle that determines fuel economy is different than ours. When tested in our system those magical diesels are not so amazing in terms of fuel economy. In terms of CO2 production they are simply higher than gasoline engines which negates any environmental benefit they might been seen as having. Affordable gasoline hybrid powered cars simply blow diesels out of the water by any environmental measure, and then of course there are the plug-ins.

Still image taken from video below. Credits shown when viewed.