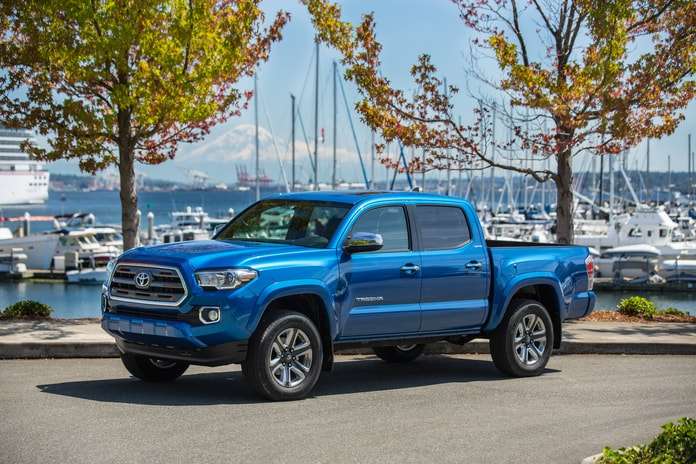 Consumer Reports Predicts the 2018 Toyota Tacoma Will Be Unreliable, But What Does Its Own Data Reveal?

Consumer Reports gives the 2018 Toyota Tacoma a terrible 1 out of 5 rating for predicted reliability. That doesn't jive with its own survey data for the current truck.
Advertisement

Using our subscription to Consumer Reports, we looked at the breakdown of the Tacoma's reliability data for the 2016 and 2017 model year truck. There are 17 areas that Consumer Reports asks owners questions about. The publication calls these "Trouble Spots." The ratings results are shown as color-coded icons. A green double up arrow is the highest possible score. Of the 17 categories, the 2016 Tacoma earned the highest possible score in 13. Those included Major Engine, Major Transmission, Electrical System, and Suspension. In the four categories in which the Tacoma did not earn the highest possible rating, it earned the middle rating for Drive System, Body integrity, and In-Car Electronics. The Tacoma earned a second to lowest score for Transmission Minor. That issue had to do with rough shifting and was addressed by a TSB.

In 2017, the second year of this generation, which again, Consumer Reports had predicted the lowest possible reliability, the Tacoma improved. In the 2017 model year, the Tacoma earned the highest possible rating in 15 of the 17 categories. The Body Integrity and Drive System scores moved up to the highest rating. Transmission Minor moved up to the middle rating and In-car electronics moved up to the second-highest possible rating. Across the board, the nearly perfect Tacoma improved in all the areas in which it was not scored at the highest rating. Yet, Consumer Reports still keeps that 1 out of five predicted reliability rating in place for the Tacoma. Oddly, the Consumer Reports predicted reliability rating was a perfect 5/5 for prior model years Tacomas (such as 2015), despite those model years having lower actual scores than the 2017 Tacoma.

Josh Rogers wrote on November 14, 2017 - 3:05pm Permalink
It appears CR is trying to get Toyota to change the pickup even through the rest of us like it just the way it is. If we wanted a Honda Ridge Line (an accord with an open bed) we would buy one. Since CR has been hacking on the Tacoma for years, it seem they have decided to publish a disinformation claim against Toyota in hopes Toyota will change. Why can't they just say it rides like a pickup, it doesn't have Auto 4 Wheel Drive and can be a little noisy? I am pretty sure a majority of people buying the #1 selling mid-sized pickup are under no illusion they are buying a Camry with an open bed. Dear CR we don't all want soft pickups, some of us actually want something that will LAST. If I took their ideal pickup off road, it would remain their indefinitely. Honda does NOT make a pickup.
douglas guenther wrote on September 21, 2018 - 1:54pm Permalink
I owned a 2010 and still have my 2015 tacoma , no issues with the 15 , the only issue with the 10 was the rear leaf springs , the truck had sag ass , that was corrected on the 15 , I want a truck not a car , the 5 speed auto trans would shift a little odd at times ,I dont know why anyone would have a problem with it , drove the gen 3 , super quiet cab , dash is laid out nice motor has plenty of power , will be trading in 15 for one those .
Don wrote on November 5, 2018 - 4:26pm Permalink
Recently bought a 2019 Tacoma Trd 4x4 double cab. Problems with automatic transmission that keeps shifting when going from 40mph on up to 60mph. Read where the 2017 and 2018 had same problems. Thought the 2019 fixed the problem. Drove the truck before buying it but drove it slow around town. Made big mistake. Won't be able to sell it. Whenever I take it in to get it checked, I know it won't be fixed. Other people had the same problem. Never got fixed. Traded in my 2004 Trd Tacoma. Wish I had it back.
Paul wrote on December 17, 2018 - 2:46am Permalink
I have a 2015 TRD Sport 4x4,,, ZERO problems!!! If the 17, 18 or 19 have an issue, insist on toyo fixing it, address it as a safety issue because is could become a safety issue. I have had a lot of Tacoma's and two Tundras with ZERO problems. I RETURNED A CHEVY UNDER THE LEMON LAW,,, I LEARNED IF YOU TAKE A NEW VEHICLE IN THREE TIME OR MORE FOR THE SAME REPAIR, THEY HAVE TO TAKE IT BACK AND 'UNWIND THE DEAL" THATS THE LAW, (OR IT WAS 5 YEARS AGO) Lemon Law attorneys work for you for FREE!!! Dealers do NOT want you to know it... Im Pro Toyo but if they push a lemon on you, Push back!
Lindsey Durham wrote on October 8, 2019 - 7:35pm Permalink
Purchased a 2019 in July. The transmission is jerky up and down, Toyota just blows you off won't do anything to fix the problem. Last one I own, my third Toyota truck.