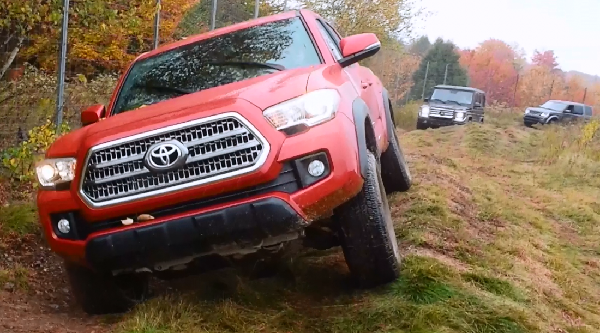 Consumer Reports issues a confusing report panning the top-selling midsize truck in America. Here is a detailed breakdown on why the group dislikes the 2017 Toyota Tacoma.
Advertisement

That does not add up to ten, but it may not matter in the case of the Tacoma’s inclusion on the list of 10 worst vehicles to buy. Before we go too far, let’s break down the Tacoma’s results in the above categories as reported by the group itself, and in the case of safety, IIHS and NHTSA's findings.

Consumer Reports – Tacoma Owner Reliability Survey Results
In its summary of the Tacoma’s reliability survey results, the group uses color coded Icons that represent a score from “Better” to “Worse.” There are 17 categories. The 2017 model Tacoma is not shown, but the 2016 model, which has been on sale for about 18 months, is the same truck (same generation - no changes) and is rated. In the 17 categories, Tacoma Scored 13 “Better” icons, the highest possible rating. Those included both engine categories, Transmission Major, Electrical, Suspension, Brakes, and Body Hardware. In the remaining 4 categories, Tacoma scored the second highest icon possible for Transmission Minor and Drive System. In the last two remaining categories, the Tacoma scored the middle icon. Not a single red icon, not a single score below the middle icon. Consumer Reports lists an overall score above this list and it shows a double red icon. How this conclusion was reached is not explained. Below the chart there are the TSBs and recalls for this model listed in detail. There are none for the 2017 model or the 2016 model year. The Tacoma's prior two years summaries, 2015 and 2014 trucks, are almost entirely double green arrows and the Tacoma scores the highest icon overall.

There is more evidence that Consumer Reports got this call wrong when it comes to reliability. In the group’s review of the 2016 Tacoma (again, the same vehicle as the 2017), the reviewer says regarding the Tacoma’s Reliability “This beast of burden has a bulletproof reliability track record, a tough-as-nails chassis, and a durable composite-­plastic bed.” In the review summary, there are “Highs” and “Lows” listed. Under Highs, Consumer Reports wrote, “Fuel economy, resale value, reliability, off-road capability.” How can a vehicle with “Bullet-Proof reliability” which includes among its highs “reliability” also have poor reliability?

CR Owner Satisfaction Survey Results – Tacoma
In the video report below you will hear the narrator (who the author considers a friend) say that the Tacoma has “…only average owner satisfaction.” The problem is that this is incorrect according to Consumer Reports on-line summary of the Tacoma. In that summary, the 2017 Tacoma is listed as earning three out of five bars on the scale given, which is shown with the printed word “Good” above the scale. The Tacoma does not have “only average” owner satisfaction, it actually has earned a Consumer Reports score of “Good” regarding owner satisfaction. (More on pages 2 and 3)

There is one more problem with Consumer Reports conclusion and the summary of the Tacoma in the video below. In the video, it is said that, “…In the small truck category, it (Tacoma) rates as the worst…” The problem here is that in this segment, which includes the Tacoma, Nissan Frontier, Chevy Colorado, GMC Canyon, and Honda Ridgeline, Consumer Reports has not fully evaluated all the vehicles. A close look at the Nissan Frontier’s summary on Consumer Reports shows that the group has not given the 2017 Frontier an overall score, and has not road tested the truck. Furthermore, its owner satisfaction results are shown as “Fair.” Predicted reliability is shown as “Average.” A comparison of the 2016 Frontier’s detailed owner reliability results shows that the truck has almost identical scores to the Tacoma’s. 14 green double arrows, two single green arrows, and an average icon. This earns the Frontier an “average icon” for overall reliability.

Consumer Reports Road Test - Tacoma
The Tacoma scored very low on the road test done by Consumer Reports. On-road the truck is not at all like most vehicles and may indeed be the “worst” of all the midsize pickups. However, 40% of all Tacoma buyers drive their new truck home with added off-road options. In its review, Consumer Reports mentions this, saying. “For off-roading adventures, the capable Tacoma has few peers.” The review also pointed out that the Tacoma is “…perfect truck for landscapers and contractors.”

Safety - Tacoma
Safety is not a problem for Tacoma. In both IIHS crash tests conducted, the current generation truck scored “Good.” On the NHTSA tests, the Tacoma earns four or five stars on every evaluation.

As we have shown, the actual reliability of this truck is excellent. The Tacoma is the top-selling Midsize truck in America. It is the truck with the highest resale value overall, and aside from a discontinued Toyota model, the highest resale value of any vehicle for sale in America. According to iSeeCars, Tacoma owners keep their truck over ten years 1.7 times more than the average vehicle owner does (second among midsize trucks overall). Are these the credentials of a vehicle that is one of the ten worst vehicles in America?

Tacoma - Incorrect Conclusions?
Consumer Reports is basing its conclusion of the 2017 Tacoma on reasons not mentioned in the video report about the worst vehicles in ten categories. The group has reason to believe that the Tacoma has some underlying issues that make its predicted reliability a problem. Consumer Reports says of its predictions on reliability "Our extensive survey data, combined with our technical knowledge, allows us to expertly predict the reliability of new and redesigned models."

Consumer Reports has never been a fan of the Tacoma, and our report on its 2015 review of the prior-generation of the Tacoma explains that history. Torque News has reached out to Consumer Reports and asked if the group is willing to share more details on why it has come to the conclusion that the Tacoma has a poor predicted reliability. We hope to share that information if it becomes available.

Note: Our story includes embedded links to the specific Consumer Reports on-line pages we reference in the story. However, Consumer Reports is a subscription-only publication. Therefore, non-members may find that links fail or are redirected.