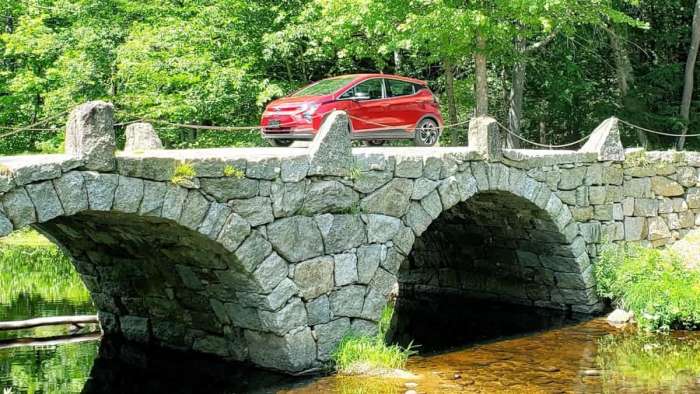 The Chevy Bolt is a very interesting example of how electric vehicles are no longer price elastic.
Advertisement

As the Chevrolet Bolt transitioned from its 2021 model year and first-generation into its 2022 model year and new generation, two interesting shifts have occurred. First, in key markets, GM has reduced its price incentives for the Bolt dramatically. Bolts that were costing residents in EV-friendly Massachusetts went from costing around $18K for LT trims now cost buyers $28K. With no federal tax incentive for the Bolt, the only discounts for Mass. residents are the state's $2,500 EV rebate and the discounts that GM's dealers and headquarters offer. Helpfully, the DriveGreen program lists out all the best prices for Bolts in this green vehicle Mecca. 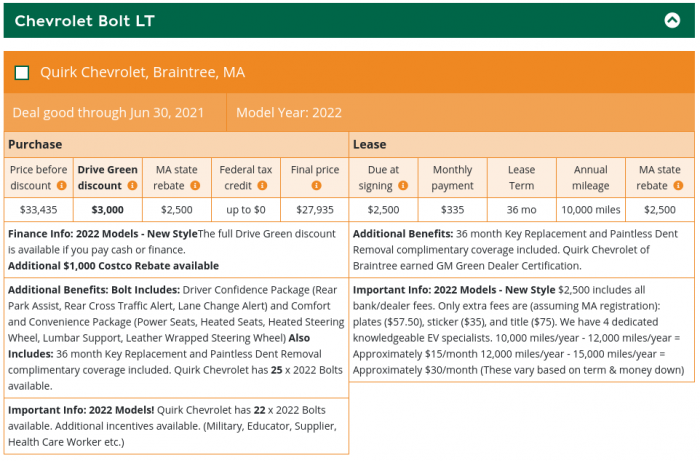 One might assume that with consumers' costs going up by more than a third, the Bolt's last quarter of sales would be lousy. Actually, the last quarter was one of GM's best ever for the Bolt. With 11,263 Bolts delivered in the quarter, GM not only bucked the shortage trend with its Bolt, it had a pace about 50% higher than its past "normal" quarters. Compared to the same period in 2020 Bolt deliveries went up 350%.

It is our observation that electric vehicles are now in greater demand than any manufacturer can keep pace with. Tesla, GM, Ford, and Toyota are selling EVs as fast as they build them, and upcoming electrical vehicles enjoy massive backlogs of pre-registrations. It is comical that the federal government is considering price subsidies for the hottest vehicles in all of recorded history as if they won't sell without them. As the Bolt has proven, EVs don't even need the current EV tax credits to surge in sales, never mind new taxpayer subsidies.

At $28K the Bolt LT is still a great deal. New for 2022, the Bolt now has wireless Android Auto and Apple CarPlay, a new snazzy look, a seat improved based on owner feedback, and some of the best driver-assist technology we have ever tested. The only thing it doesn't have is price elasticity. When GM raised the price, the sales went bonkers.

Ron wrote on July 1, 2021 - 8:10pm Permalink
The base prices went down several thousand dollars for the 2022s. Not sure I understand this article.
John Goreham wrote on July 5, 2021 - 10:58am Permalink
Hi Ron. Here's the quick explanation: Vehicles in America usually do not sell at their "base price." Discounts, rebates, tax incentives, dealer markup, and other factors come into play. What this article discusses is the actual sell price, also known as "average transaction price." In other words, the price the consumer pays. Chevy dropped its MSRP, which you refer to as the base price, but the cost to the consumer rose quite a bit. That is what makes it newsworthy. Under the first paragraph, we included an image of how the consumer cost is calculated in one EV-friendly state.
DeanMcManis wrote on July 2, 2021 - 1:30am Permalink
This makes sense to me. Now there are two versions of the Bolt. The refreshed base model and the larger EUV version. The refresh and new model are already enough to drive new sales. Whereas the previous model had remained largely unchanged, and had a connection to the battery recall issues of their earlier models. The same spotty reputation issues kept sales down for Nissan Leafs. I think that Chevy was hoping for one or more of the proposed EV bills to pass to potentially drop the net price of their EVs by as much as $12,500 each, plus $2500 in state EV rebates. That could potentially drop $15K off of the net price, which would make it extremely attractive. I have seen local 2022 Bolt LT lease deals of $260 a month, but with a higher $4K due at signing price. Still, with the $2500 state rebate, that lease price looks pretty good. Especially with all of the nice additions to the new Bolt models.
Anthony Moniz wrote on July 25, 2021 - 5:11pm Permalink
Chevy Bolt loaded costs for operation in Canada . How long does the battery pack last ,? What does a exchange battery pack cost ,,?