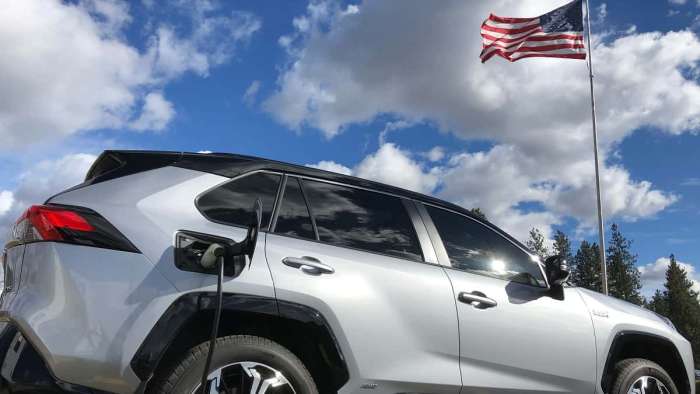 All plug-in hybrid-electric vehicles are not created equal. Just like the feel, performance, and driving satisfaction from battery-electric vehicles varies, so too do PHEVs. This review highlights the biggest difference to look for.
Advertisement

Shoppers in America looking for a practical, enjoyable, reliable vehicle that meets their needs and has a big impact on the local and global environment are turning to plug-in hybrid-electric vehicles (PHEVs) in ever great numbers. One top-selling PHEV is the Toyota RAV4 Prime. The RAV4 Prime is the second fastest-selling vehicle in America after the Chevrolet Corvette. Whether the RAV4 Prime meets your list of priorities depends on your personal circumstances and wishes. Those who want a five-passenger crossover with standard all-wheel drive, a 94 MPGe rating, 600 miles of total range, and 42 miles of EV-only range are finding the RAV4 Prime is the perfect vehicle.

Need a Quick Guide to EV Terms? Here You Go

Choosing a PHEV - What is Your First Priority
When one chooses a plug-in hybrid vehicle the first thing to think about after your shortlist of must-haves is this; "Do you want a PHEV that feels and operates an EV first or a conventional vehicle with a short EV-only range?" If you are looking for a vehicle that will operate primarily as an electric vehicle, the RAV4 Prime may be a great choice.

When Driving.CA compared the BMW X5 xDrive 45e to the RAV4 Prime, the publication discovered a key difference between the two cars, and perhaps the difference in philosophies of the companies that built them. In the case of the Toyota, the reviewer found that the RAV4 Prime feels more like an electric vehicle that’s been range extended than the X5, which the reviewer found felt like a vehicle with "... a big gas engine to which BMW added a battery and a motor." In other words, one is a PHEV at heart, the other a PHEV in name only.

How the RAV4 Prime Topped A PHEV Twice Its Price
We all know and respect the RAV4 crossover. It is North America's top-selling non-truck nameplate and has become the de facto "family car" for our time. RAV4s start in the mid-$20Ks new and some are bare-bones reliable and affordable transportation. And then there is the RAV4 Prime. A vehicle with 300 hp, capable of a run to 60 MPH under 6 seconds, and packing standard features that many luxury brands will charge you extra for.

The reason that the Toyota RAV4 Prime is being compared to the BMW X5 isn't that they are head-to-head competitors. Of course not. One is a high-performance PHEV with an amazing array of content and the other is a conventional luxury crossover to which a limited-capability battery and motor have been affixed. These two vehicles differ more than are similar. However, in terms of which is the better PHEV, we will let the person who compares them have the final word. "The RAV4 is the superior plug-in in this comparison."

Please do read what else the reviewer had to say about the RAV4 Prime here at the full Driving.CA story. It is a well-done comparison/contrast story we think many RAV4 Prime owners will understand, and a report that many BMW owners who have never tried a RAV4 Prime will roll their eyes at.

Badmonkey wrote on May 26, 2021 - 2:46pm Permalink
First off the two aren't comparable as you can nearly buy 2 Rav4 for the same price as the BMW and I'd love to meet any lunatics' cross shopping the two. Only two vehicles have anything in common with the Prime which is the Pacifica and Mitsubishi yet a BMW is chosen? Why? Why does neither article address the silliness of the BMW using a turbo and a electric motor and still only pulling off a 4.7 0-60mph time. Pretty pathetic considering the number of moving parts all for the sake of acceleration. Sorry if your in the market for a $90K CUV you would have to be completely off your rocker to buy the 45e over the X5M.