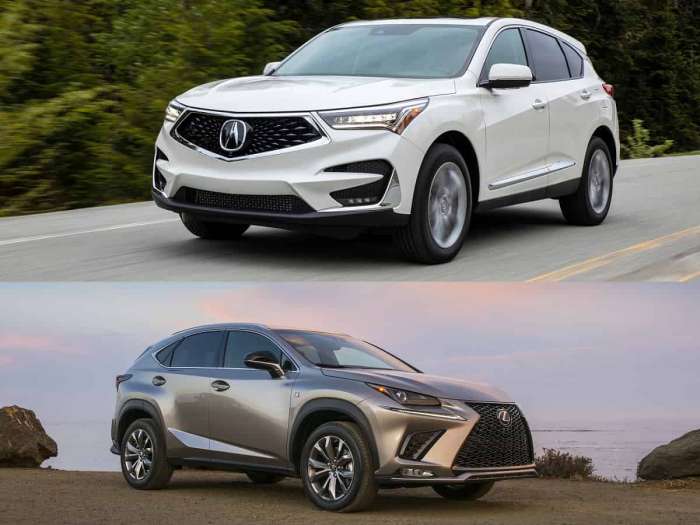 The Acura RDX is all-new for 2019. We compare it to the Lexus NX 300 AWD and share what we found so you can decide which is right for you.
Advertisement

The 2019 Lexus NX 300 AWD and the 2019 Acura RDX SH-AWD are two of the best premium two-row crossovers in America. Both have strengths and few weaknesses, but there are some significant differences for the 2019 model year shoppers should be aware of. The Lexus NX is a carry-over model from 2018 and unchanged in any meaningful way since it was introduced a few years back. The Acura RDX is a completely different vehicle from last year. Here is our breakdown of the important differences.

RDX vs. NX - Size
While both are two-row crossovers, the Acura RDX is now a larger vehicle than the Lexus NX 300. The Acura RDX is now five inches longer, an inch wider, and an inch taller than the Lexus NX. Inside, we found the NX very comfortable except with regard to the driver’s knee area. Our right knee was in constant contact with the hard plastic of its oversized center console. The RDX, by contrast, is larger and roomier in this regard. Where the size difference is felt most is in the cargo area. With the rear seats up the RDX has almost double the volume of the Lexus NX.

NX 300 AWD vs. RDX SH-AWD - Prices
The Lexus NX is less expensive than the Acura RDX. The NX 300 starts just under $39K with AWD. The Acura RDX starts at just over $40K. Our top-trim Lexus NX tester (a 2018 model) had a sticker price of $45,560. A similarly-equipped Acura RDX will be priced at about $49K. The two are not identically outfitted, but our sense from viewing the configuration tools is that the Lexus is about 10% less expensive at the top of the range, and relatively close in the base trims.

RDX vs. NX 300 - Drivetrains, Fuel Economy, and Fuel Requirements
The Lexus NX 300 is equipped with a 2.0-liter turbocharged engine developing 235 hp. It is mated to a six-speed automatic transmission. The RDX also has a 2.0-liter turbo, but its has more gusto at 272 hp. Acura also uses a more modern 10-speed automatic transmission. While both have ample power, the RDX feels a bit quicker in all situations. Both offer advanced all-wheel drive. 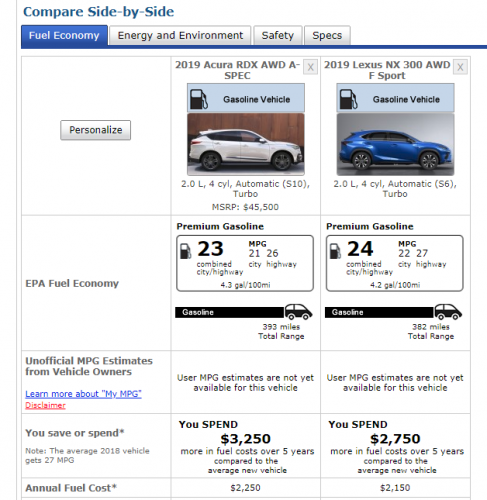 The EPA’s fuel comparison is above. The Lexus NX has a 1 MPG advantage but requires Premium fuel. That is a requirement, not a recommendation. The Acura RDX can operate on 87 octane regular unleaded. 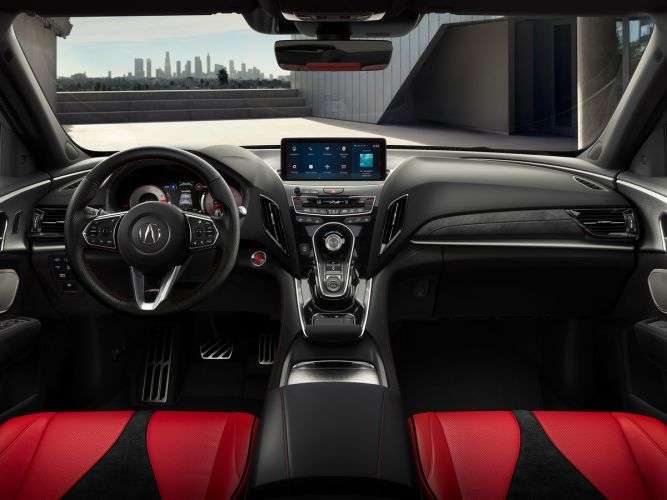 RDX vs NX - Audio
Our Lexus NX tester had a 10-speaker Lexus Premium Audio System as part of the Navigation Package. It was good and lived up to expectations. Our $48,395 A-Spec RDX (One trim lower than the top) had an amazing Acura ELS Studio 3D Premium audio system with 710 Watts of power and 16 speakers (including in the roof). No system we have ever heard was better at any price point. This is a decidedly big advantage for the Acura.
Both the Lexus and Acura include Apple CarPlay, but neither has Android Auto – yet. Acura says that it is planning to add the Android system for all 2019 model year buyers. Toyota has not made that commitment.
Both vehicles use a touch-pad interface. We are not big fans of remote interface units here at Torque News. We prefer simpler touch-screen systems. This one is a wash. Choose the one you like best. 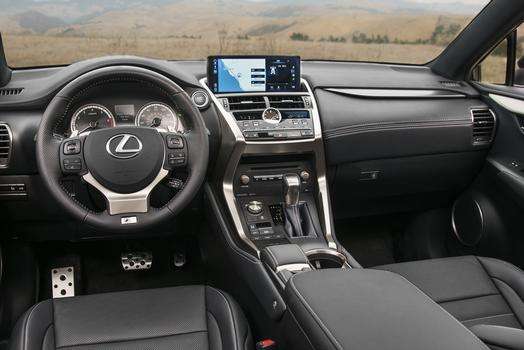 RDX vs. NX 300 - Other Features
Both the RDX and NX 300 have a heated steering wheel option, but both only offer it on top trims. Acura offers a head-up display, but only on the top trim. Neither has adaptive front lighting (that moves from side to side as you turn). All of these options are available for significantly less money in Mazda’s 2019 CX-5 Grand Touring crossover. We found it odd that these features were not standard on the RDX and NX 300. The Lexus NX has a compact spare, the Acura RDX has a spare in only certain trims.

The Drive
The Lexus NX 300 AWD has a very comfortable ride and also has good cornering and braking. The RDX from Acura has an equally compliant ride but has a slight edge in handling. They feel different. The NX feels more upright and more like a conventional sporty crossover. The RDX feels more like a performance coupe or sedan. This one is a matter of personal preference.

Conclusion – Acura RDX SH-AWD vs. Lexus NX 300 AWD
In the past, these two were closer to one another in many ways. For 2019, Acura diverges from the prior formula in key ways. We suspect that Lexus will follow suit for a later model year. Although the Acura RDX has the edge in audio systems and performance, the Lexus is no slouch in these areas. The Lexus has a bit lower price point and we think that if the folks at Lexus are offering their usual incentives the NX may have a meaningful advantage in price. However, resale value may negate that advantage. Size is the real differentiator between these two. Those who prefer a more compact vehicle will like the Lexus and those that want the added space will find the RDX to their liking. If you shop these two great premium crossovers side by side, please tell us in the comments below which you prefer and why.

C.G. OUIMET wrote on October 12, 2018 - 6:10am Permalink
My 2019 RDX Platinum Elite has a compact spare and adaptive headlights; the A-Spec doesn't. (BTW, your 2nd RDX pic is of an A-Spec, your 1st pic is of a US Advance or Cdn Platinum Elite.) The NX has the Toyota/Lexus face - by far the ugliest ever to grace a car or family of cars.
John Goreham wrote on October 12, 2018 - 9:24am Permalink
Thank you C.G.! I have edited the section on spares to be more accurate. Good eyes noticing the trims in the images. I suspect you may be outside the U.S. market based on your trim descriptions. I double checked the U.S.-spec lights and they are all the same (and ours were not adaptive). That Lexus mug sure is polarizing, there is no doubt. The new Acura grill looks great to our eyes. - What do you think of the audio in the RDX you have?
C.G. OUIMET wrote on October 12, 2018 - 11:54am Permalink
Yes ... A Canadian Platinum Elite. I don't understand why only my Platinum Elite gets adaptive headlights. It seems all Canadian trims get a spare; the US trims except the A-Spec seem to get a spare. I don't understand the rationale for all that. The last time I used a spare was on my first car ... a full size spare on my first car, a 1970 Olds 442 back in 1973. Personally, I could do without the spare and get additional underfloor cargo space ...
John Goreham wrote on October 12, 2018 - 2:44pm Permalink
Thanks, C.G! You're a lucky duck. I have had flats in a BMW X3 (with run flats) a Volvo XC60 (sidewall destroyed) and a Civic in just the past few years. All test cars luckily for me. I also find it weird that U.S. and Canadian-spec cars vary. When I used to work in Canada I noticed the Acura line had a vehicle the U.S never got. It was based on the Civic back when our smallest car was a TLX (I think). Cheers,
William Farkash wrote on May 16, 2020 - 4:33pm Permalink
I own Acura since1986 (first legend) every 3 /4 years I went through different models Tl. Cl and I had the the first RDX 2014 2017 and now 2020 I do understand a bit about modern technology but what I don’t understand why they taking away the cd Player the ubs the dealer has no clue how to use it you can’t pick up your wipers to clean unless you open the hood to me 2017/18 models are better but I love my 2020
C.G. Ouimet wrote on May 17, 2020 - 4:41am Permalink
See the RDX Manual ... Maintenance - Changing the Front Wiper Blade Rubber p 549 Features - USB Ports p 239
C.G. Ouimet wrote on May 17, 2020 - 4:34am Permalink
In the Manual Maintenance section, "Changing the Front Wiper Blade Rubber" (p 549) ... This places the wipers partway up the windshield from where they can be lifted and/or changed. As for the USB's ... The USB port beside the console cup holders is the one to connect your phone, iPod or USB stick. Then see USB Ports under Features in the Manual (p 239).