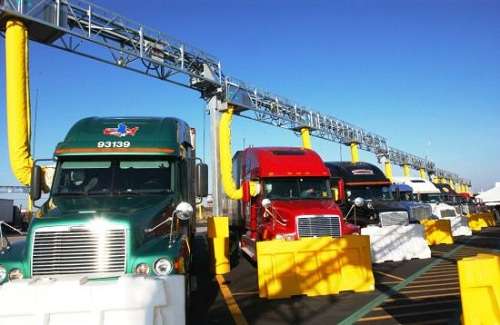 Chevy supports CO2 reduction and its support of IdleAir, a product that prevents trucks from idling is a good example of the scope of its projects.
Advertisement

Chevrolet is committed to reducing the amount of CO2 that enters the atmosphere. Chevy’s goal is to prevent 8 million metric tons of CO2 from being emitted. To date, Chevy has found ways to prevent about 7 million tons of CO2 from being emitted. These commitments are in parallel to Chevy’s attempts to build more fuel efficient vehicles. On novel way that Chevy has found it can help is by shutting off truck engines.

Called IdleAir, the system helps long haul truckers reduce their engine use by about 8 hours per day. Many people may not realize it, but trucks covering great distances often stop at night and run their engines all evening to provide heat or AC, and power to the cabin. The driver sleeps, reads, surfs the internet, watches TV, or whatever to pass the time required by federal law. Truckers are required to have a certain amount of rest time.

In order to both reduce the engine idle time and to provide a better environment for the truckers, Chevy is backing IdleAir. This is a system that is set up at truck stops. The system provides HVAC, power, and internet and TV through a reusable window adapter (See photo). By using the IdleAir system a driver can save about 1 gallon of fuel per hour. Diesel fuel is presently selling for about $ 4.10 per gallon in the US, so the cost is not insignificant. Drivers will spend nearly a thousand dollars per month in fuel while not moving without such a system. IdleAir’s website currently lists the service at a cost of about $2.09 per hour. Longer uses than 10 hours costs much less. Therefore, a driver can not only save the environment by using IdleAir, but also hundreds of dollars per month.

Presently, IdleAir is available at about 25 locations in 10 states. Chevy’s partnership is helping to expand that. The system does not provide only economic and global environmental benefits. IdleAir CEO Ethan Garber commented saying “IdleAir enables drivers to enjoy a better environment inside and outside of the cabin, without the noise, vibration, and exhaust fumes from idling. By expanding access to this option throughout America, communities experience cleaner air, reduced noise pollution, local job creation, and an increased tax base for the local economy.”

IdleAir is just one way that GM is helping to reduce CO2 emissions. In addition to offering alternative energy vehicles like natural gas fueled pickup trucks, Chevy has a diverse portfolio of projects designed to offset CO2. For example, the company supports forestry management projects in Pennsylvania, provides financial support to wind farms in Oklahoma, and even was the largest voluntary buyer of corporate CO2 credits in 2011 according to the company. David Tulauskas, GM sustainability director and manager of the Chevrolet carbon-reduction initiative summed up Chevy’s viewpoint this way; “If we want to leave the world a better place, we need to change the way we do things. Climate change, population growth, urbanization and other issues require our industry to transform itself. We are going beyond our traditional scope of responsibility – building efficient vehicles – into these community-based carbon-reduction projects to help demonstrate our commitment.”