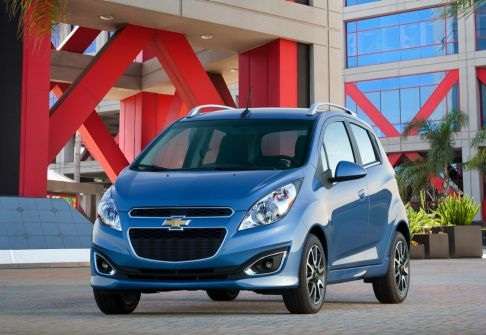 Owners of the new Chevrolet Spark won’t get to participate in one part of car ownership many of us have come to expect. Ever since the distributor cap went the way of the buggy whip, car owners have had it easy. We no longer need those pesky “Tune-ups” that used to cost so much. Instead, we get treated to a fifty dollar oil change and then offered “throttle body purges” tranny flushes” complete with a trio of colored liquids signifying the choice we have; clear (good $199), beige (Bad $99) or black as cancer (no charge, but good luck with that). On the way to the wallet we are then offered to put into our tires what is already in the air, but more of it. Forget the kids’ college plan, just hand over the credit card.

Chevy has decided that enough is enough with the 2013 Spark. This new micro car will now come with a timing chain instead of a belt. Setting aside that we used chains for about 5 decades and they never broke, but then switched to belts that do, this is progress people. No longer will we be harangued at the service desk with threats that our vehicle does fall in to the more costly “extreme use” category even though we live in a place without snow, rain, or heat, and don’t drive the car except on sunny Sundays. Nor will Spark owners get to hear “The timing belt is only an arm, but while we are in there we should also change out that water pump, so in total it will be an arm and a leg.” Indeed in a press release today Chevy has confirmed that it does not consider the timing chain on the Spark a maintenance item. Can we get a halleluiah!

As if the Spark wasn’t cheeky enough, Chevy now negates the cool triple colored liquid display on the service counter by telling owners that the transmission fluid is expected to last the life of the vehicle. Since they were in a groove Chevy also threw in the electronic power steering fluid as a bonus. What this means is that if an owner looks long and hard at their maintenance items over 100,000 miles they will find they have:13 oil changes, 2 sets of tires, brakes, and 4 engine air cleaner elements (which this author’s nine year old changed in under 1 minute on the family car saving the $30, half-hour, labor fee.)

Chevy also announced the Spark's plugs will also last 100,000 miles. That is about 80,000 miles longer than the Sparks first owner will keep the car in many cases, since the Spark is designed for urbanites without a big budget, but who want a new car (college kids, recent grads, and ?). Jim Federico, executive chief engineer, General Motors Small Cars put it simply “The Spark will appeal to young urban buyers who are always on the go. The Spark is perfect for these urban lifestyles because it is not only easy and fun to drive but also easy to own.”
Chevy points out that these long maintenance intervals, elimination of the timing belt change, and other more common maintenance improvements, like 7,500 mile oil change intervals, will save owners up to $3100 over the life of the vehicle. We think they may be underestimating the effect frankly. Since all GM products come with a 3 year, 36,000 bumper to bumper warranty which will sort out any built in issues, and also 100,000 mile powertrain warranty, the little Spark basically offers a fixed cost of ownership over its lifespan. This article is a bit snarky, but that is no joke.

Chevy has now opened the door to fixing one of the two worst parts of car ownership ; being overcharged for maintenance, and being given the hard sell on worthless add-ons in the “aftersales” manager’s office after we buy a new car. Let’s hope Chevy keeps the ball rolling.

jim wrote on October 6, 2017 - 8:22pm Permalink
TRANSMISSION FLUID MUST BE COMPLETELY CHANGED AT 75000 ACCORDING TO THE MANUAL. i DIDNT AND IT STARTED TO SLIP AT 92000 READ THE MANUAL.
JoAnn wrote on October 21, 2017 - 5:06am Permalink
I have a 2013 5 speed spark and have not changed it. I have 127,000.00 miles on it. Trouble I am having is figuring why eng light is on. PO106 NOW. Prior it was po599 so I changed map and maf sensor. Cleaned throttle body. Changed oil. Replaced thermostat. Learning to do all this by myself n help of friend. Today try changing spark plug n hope that helps. It's been up n down w the accerleration. I also put in the Lucas cyli de cleaner.
TSB wrote on January 14, 2020 - 11:32am Permalink
Gas cap loose or leaking? Try a new gas cap.
David Hair wrote on November 29, 2020 - 12:02am Permalink
I changed the accelerator pedal on mine and that fixed the problem you are having.. The pedal is electronic.I got the part from Rockauto and it cost about $40.00 plus shipping. cheapest place I found.
will wrote on September 11, 2018 - 1:39am Permalink
to this day i have 104k miles on my 2013 spark, the only thing i have done is regular oil changes every 5,000 miles, tires, battery, air filter, and thats about it. don't know how many more miles is left in this spark but i am willing to find out.
LINDA B LAFLEUR wrote on March 29, 2020 - 12:27pm Permalink
I have 41000 miles as of last week I bought my 2017 Equinox spanking brand new it had 20 miles on it that's going on four years ago I don't drive my car a lot I was just wondering I was told that I don't need a tune-up because of the miles that's on my car the spark plants last much longer than that is that true