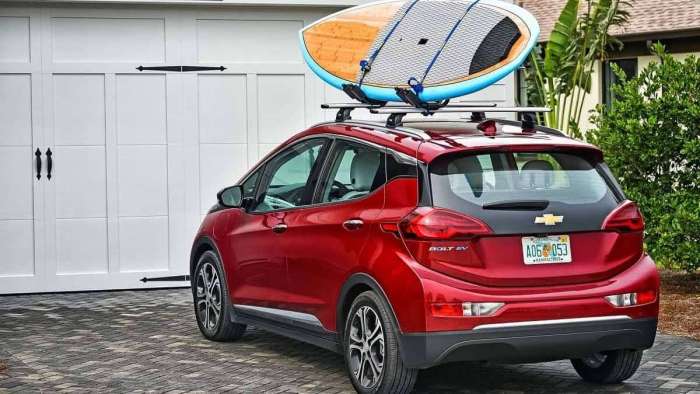 Don't count out the Chevy Bolt yet. In September it was the top-selling affordable EV in America and the number two EV overall.
Advertisement

The 2019 Chevrolet Bolt battery-electric vehicle (BEV) was the top-selling affordable electric vehicle in America in September with sales of 2,125 units. For the third Quarter, Chevrolet delivered 4,830 Bolts, up from 3,949, a healthy 22% increase in sales. The Bolt's sales compared to September of 2018 are the most impressive. In September of 2018, GM delivered just 1,549 units. This sales result is more interesting due to the decrease in sales of EVs overall in America and other markets.

The Bolt is available in many U.S. markets (Including New England) for around $20K after incentives which include federal tax deductions, local rebates, and heavy dealer discounting. This combination is not unusual. Nissan Leaf BEVs, Toyota Prius Prime plug-in hybrid electric vehicles (PHEVs) and other EVs are costing buyers low $20Ks as well.

Despite the United Auto Workers' strike and truckers' unions refusing to deliver vehicles in honor of that strike, GM still managed gains in Q3. Overall GM was up about 6% compared to the third quarter of last year. One model that is not up is the Chevrolet Volt. General Motors discontinued the Volt despite fan and owner adoration and a strong history of sales this spring. The Volt remains the top-selling affordable EV ever sold in America.

The Toyota Prius Prime was down, the Leaf down, and the Honda Clarity down in September. Together these vehicles along with the Bolt are the entire affordable EV market in America, aside from a few very low volume models that don't maintain a 500 unit per month run rate. To say that the affordable EV is failing in America is an understatement. The Toyota Prius hybrid still outsells the top four affordable EVs combined most months.

For September, Tesla's Model 3 was down again. Dropping about 10% to just over 20K units sold. The Model 3 is the only EV in Ameria that sells in mainstream volumes. Tesla fans like to remind each other that one reason Tesla's sales rate is not as strong as last year is that it has changed its inventory allocations to include other markets. That said, a vehicle from a company based in America and built-in America declining in sales in America is never a great sign.

By contrast to electric vehicle sales, Toyota hybrid sales continue to remain strong. In September Toyota's hybrids totaled 23,339 units, up a healthy 38% over September 2018. Year to date, Toyota has delivered nearly 200,000 hybrids, up 20% over 2018's sales through October 1st.

Some sales data in this story were sourced from Inside EVs.