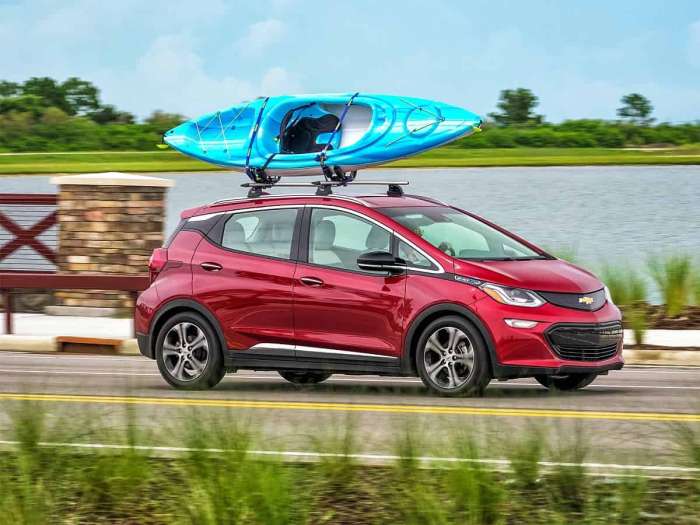 The Chevy Bolt electric vehicle is dropping in sales just as other electrified vehicles are climbing steeply.
Advertisement

The Chevy Bolt is turning out to be a sales disaster for Chevy and General Motors. Despite being a media favorite and Car of The Year award winner, the Bolt's sales are in freefall over the past three months. In the third quarter sales went off a cliff and are 41.1% lower than the same period last year. The Bolt, which had monthly sales above 3,000 units in 2017, has not had a single sales month above 2,000 units in 2018. As bad as it sounds, the year-end news could be much worse. Q4 was the Bolt's strongest quarter last year. The next set of sales comparisons could be ugly.

If other affordable electrified cars were seeing the same results it would be easy to call the Bolt's sales a market reaction. They are not. The Prius Prime was up 21% with sales over 2,000 in September. The Chevy Volt was up 23% in the past quarter. The Honda Clarity and Nissan Leaf are steadily climbing in sales. Every major player in the affordable EV market is doing well by comparison to last year. Except for the Bolt.

"Why," is the question? Let's rule out two things. First off, inventory. GM increased its Bolt production over the past half year and dealers in many areas have run advertisements (Yes, actual EV advertisements on TV and in social media) showing off the Bolts sitting on lots. Second, focus. GM is laser-focused on two things. Making trucks right now, and selling EVs in the future. Mary Barra, the CEO of GM has committed the company to an all-electric future. The Bolt is GM's newest vehicle and is all electric.

One factor that cannot be overlooked is the emergence of the Tesla Model 3 as a market-mover. The Model 3 has overtaken BMW in its own "3 Series" segment, and is one of the top-selling cars of any type, at any price in the country right now. Arguing against a Model 3 effect, the Bolt sells for between $22K and $25K in EV-target states. The Tesla Model 3 sells for about $40K in these same places. Seemingly, they are not even close to being competitors. But they may well be. Almost nobody in America buys a green car of any type. Battery-electrics sell at an even smaller rate. The interested parties may be less price-sensitive than in other car-buying segments. It is hard to ignore the correlation between Chevy's dramatic drop in sales and the Tesla Model 3's dramatic rise. Almost three years ago, Torque News predicted exactly this would happen.

The Bolt may also be seeing the shift to affordable plug-in hybrid electric vehicles (PHEV) among green vehicle shoppers. Only the Model 3 has ever shown any real success as a battery-electric. Yet, almost all PHEVs continue to rise in sales. The Volt is one of those with long-term steady sales each month.

In its quarterly press release on sales results, GM didn't mention the word Bolt one time. Nor did the world's largest auto manufacturer, who has committed to an all-electric future, comment on the green vehicle market.

DeanMcManis wrote on October 2, 2018 - 6:09pm Permalink
Interesting view. I do not see the current Volt (Editor's note: We think Dean meant Bolt with a B here) sales as a surprise, or a disaster. It can only be seen as a disaster if you compare the current month's sales numbers against last year's. But that is pointless. Last year was the first year of the Chevy Bolt, and even though Chevy limited sales initially by limiting the car's production and distribution, it's sales ramped up quickly due to a pent up demand, just like the Model 3 has done. Before the new Leaf was released this year the Leaf sales dropped down to 100+ cars last December. But the new Leaf has been a great success this year. Outside of Tesla EVs the Bolt is still the top selling BEV so far this year, which is hardly a tragedy or failure. It's doing quite well, thanks. The Volt sales are up, which does take some of the Bolt's market, as does the Model 3, and the new Honda Clarity EV/PHEV lineup. Mitsubishi has their new Outlander PHEV, and I just got a flyer in the mail showing a $14,000 discount on Chrysler Pacifica Hybrid minivans, so they are clearly doing a better sales push than Chevy is with the Bolt. But the good press on the Bolt seems to keep it's sales up well, still being near the top of the EV sales list this year. the BEV and PHEV market is getting some good competition though with many automakers joining Tesla, GM, and Nissan. As the market shows, there is an increasing demand for plug in hybrids, largely because there are still only a handful of affordable BEVs that offer over 150 miles of range, and the available fast charging network is still in it's early development stages, matching the 2% market share of EVs. Big automakers like VW are looking to create a vast charging network, but it will still be a few years until that is up and running across the country. EVs that ARE actually suffering in sales lately are the Ford Focus Electric, and C-Max Energy, the Fiat 500e, and VW E-Golf, and Kia/Hyundai's EVs because they have a new long range EV due out soon. So even though you could see the Bolt's sales as being down compared to the car's first year, compared to the whole EV market (especially the lower range BEVs) the Bolt's sales are very good indeed.
TyFawkes wrote on October 2, 2018 - 6:53pm Permalink
I suspect the Bolt's inevitable failure is due more to reluctant dealerships and Tesla's extensive charging network than any other market forces. I agree most EV drivers who lease (most do) or buy are NOT too price conscious. The Bolt is a great vehicle that dealerships don't make any money on. I had one sales person tell me it costs a dealership close to a half million just to qualify to carry the Bolt for sale. Not a good start when about any idiot can sell a pickup truck the first day on the job.
DeanMcManis wrote on October 3, 2018 - 12:47pm Permalink
It seems odd that a dealership would require $500K to make it possible to support EVs, but seeing that GM is committed to offer dozens of EV models in the near future, it would be a smart investment to update their equipment to support EVs now. Still, I can understand their reluctance to change when trucks are their biggest sellers, and offer higher profits. I am guessing that GM will offer at least one line of EV trucks in the next 5 years, probably sooner because it's a large untapped market today.
Dennis Altman wrote on November 15, 2018 - 5:25am Permalink
I love my 2017 Volt, and can't imagine why it's not the best-selling car in the world.