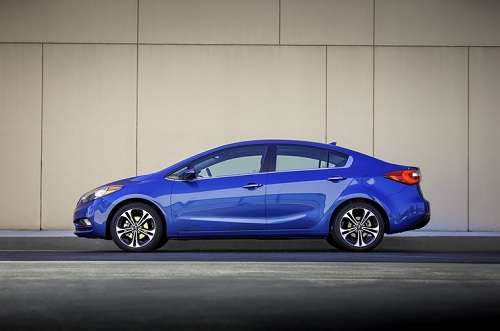 Shoppers looking at a Civic or Corolla, or even an Acura ILX will have to consider 2014 Kia Forte and here is why.
Advertisement

The Kia Forte has long been the odd step-sister of the Hyundai Elantra. Similar in many ways, but just a little to edgy and somehow off. The new 2014 Kia Forte rectifies this situation, and with this new makeover courtesy of Kia’s American Design Studio in Irvine, California, it may be the hot one of the pair. With an all-new chassis with more room, more goodies, and two good engines to choose from, the third generation Kia Forte is all of a sudden a player in the compact sedan marketplace.

New Forte Body Style
Longer, lower, and wider than the previous generation, the 2014 Kia Forte four-door is an all-new design with global appeal. Clearly taking some of the fluidic sculpture cues from the Elantra, particularly in the side view, the Forte is a great looking sedan with lots of flair. From the front, the Forte has many of the Optima elements and that is a decidedly good thing. Family resemblance is important to a brand and Kia has a great front end design. Most Fortes will come with 16 inch alloy wheels and some will have the uprated 17” alloys with 45 series rubber. It was not long ago that this was a size found only on sports sedans from premium brands like the Acura TSX.

2014 Kia Forte Drivetrains
Two good engines will be offered in the 2014 Kia Forte. The base model’s 1.8 liter four-cylinder is aimed at efficiency and has 148 horsepower. Both a manual and also automatic six-speed transmission will be offered. Most dealer inventory will be the automatic. The Forte can also come with a new 2.0 liter, 173 horsepower engine that is designed to make the Forte a sporty car. This engine will be mated to only the six speed auto.

Kia Forte Interior Appointments
Kia has wisely made Bluetooth connectivity standard and is holding back on offering a built-in GPS. Buyers in this segment are primarily younger and tech-savvy. They will be using their smart phones to guide them and the GPS and other services they will pull form the devices they carry will surpass the level of sophistication found in most vehicles in this class. Keeping the GPS out will free up space for a 4.2 inch LCD information screen and save thousands on the sticker price compared to rivals.

Fuel economy ratings and prices of the 2014 Kia Forte have yet to be announced, but when they are Torque News will bring the information to you.