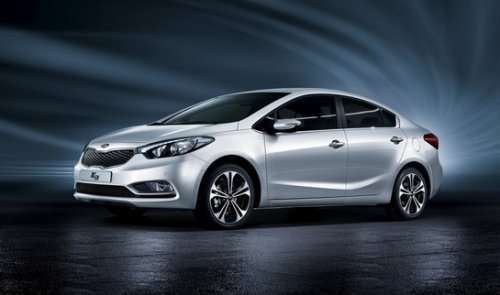 Kia has revealed photos of the upcoming 2014 Forte / Cerato model (known as the K3 in Korea).
Advertisement

Kia first teased the new 2014 Forte last week with renderings of the upcoming redesign of the popular Korean vehicle. Sold as the Forte in North America, the Cerato in Europe, and the K3 in its Korean home market, the car is one of Kia's hottest-selling sedans.

The next-generation of the Forte has been redesigned to be much more up-market than its predecessor. It is longer, wider, and sportier. Most of the size increase goes towards opening up the cabin and many of the design cues are from the recently redesigned K9 flagship with more stylish headlights, matching taillights, and body swoops.

The current Forte has been badly in need of a redesign almost from the day it entered the market, being a rather boring, almost soul-less car, so this upgrade is definitely a good thing. The interior is upgraded for 2014 as well, with more upscale fittings. Kia has not given details of the 2014 Forte's powertrain or interior infotainment options, but those should be coming closer to the new-generation's release.

Kia will be bringing the new Forte to most world markets, starting in the first quarter of 2013 in Korea (as the K3), Australia (as the Cerato), and eventually to the Americas (Forte). Variants will include a coupe (called the Koup) and a hatchback. Engines will likely be mid- and high-output four cylinder options.

Hyundai-Kia has been stepping up the pressure on American and Japanese automakers, bringing competitive models to market with aggressive pricing and marketing. The economic downturn and high price of fuel has given the Korean makers a strong leg up in gaining ground against larger, heavier, and less dynamic competition.