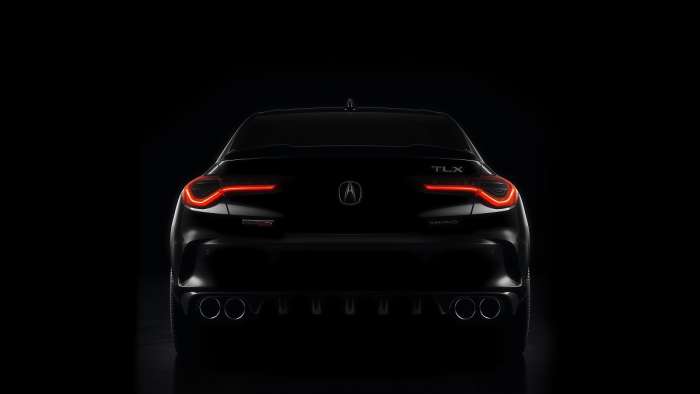 Here is your first glimpse at the all-new 2021 Acura TLX sports sedan.
Advertisement

Acura will show off its all-new TLX sports sedan via a Digital Reveal on 5/28. Torque News has learned some details of the all-new vehicle that we are allowed to share early. Based on the rear-end teaser photo that Acura has provided, we can already tell the new TLX will be a looker.

While details are scarce at this point, we do know one thing; the new TLX will be powered by a turbocharged 3-liter engine that, at least for now, will be exclusive to the Acura brand. It’s time. The outgoing TLX didn’t stack up well in this department when we tested the Genesis G70 back to back with it this past summer. More torque, and a much lower and flatter torque curve is needed. A turbocharged 6-cylinder engine will elevate the TLX to the same category as its peers.

Acura is keeping most of the details to itself until it completes its Digital Reveal on 5/28. However, the company did tell us that new TLX will be the “quickest, best-handling and most well-appointed sport sedan in Acura history.” We don’t know the prices yet, but based on our market analysis, expect the well-equipped versions of the new TLX to be priced between $45K and $55K. Sure, there will be a much lower “base price.” But who in the world wants a “base” premium vehicle?

One thing that has become clear is that Acura is now differentiating its products from the Honda line. Platform sharing is now a reality across the industry. However, we doubt that the new TLX will seem like a “V6 Honda Accord” to those who look closely.

If we can borrow a bit of Acura’s marketing lingo, it is clear to us that the 2021 TLX is the latest step in Acura’s steadfast commitment to bring what it calls, “Precision Crafted Performance” to the brand. The PMC Edition TLX we had a chance to sample this past summer felt special to us in a long list of ways. One way was the manufacturing location. We’ve always thought it was a benefit for automakers to produce vehicles for the American market in America. Our opinion has now evolved beyond that due to the lessons learned from the pandemic PPE and medical equipment shortages in our country. All of Acura’s vehicles, including this new TLX, will be built in America, by Americans, for the coming model year.

Acura has the ability to produce the kind of premium sedan that can compete with BMW and Genesis, and leave Lexus and Infiniti in the dust. In a week we learn if it will.

DeanMcManis wrote on May 21, 2020 - 3:52am Permalink
It is a very handsome car, but you can only tell so much from the rear teaser shot. You should include the front, side, and 3/4 views of this car because it does look great.

Tsingshan's Threat to Tesla: EV Maker Is In Battery Crosshairs
Tesla-Funded Research Reveals One of The Biggest Mysteries of EV Battery
END_OF_DOCUMENT_TOKEN_TO_BE_REPLACED