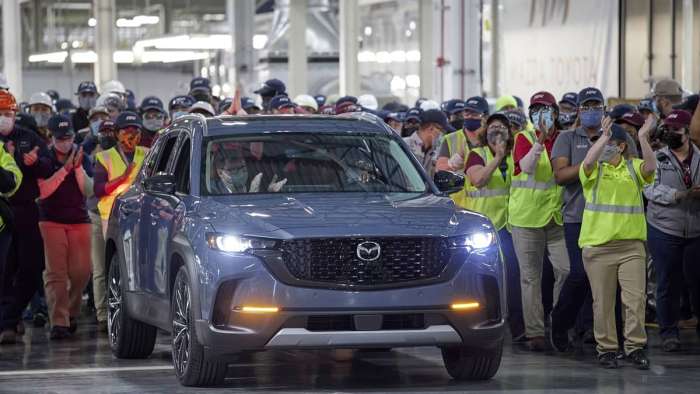 Mazda has positioned itself as the brand to watch in 2022 due to a long list of factors. Here are the top reasons.
Advertisement

As the 2022 calendar year unfolds, the year ahead is clouded for many automakers. Many brands have yet to sell a battery-electric vehicle. Production challenges and lack of capacity are limiting others. Few have a new crossover launching in 2022 aimed at the heart of the U.S. automotive market. Others that have been premier brands in the past have fallen to below average in terms of reliability. Mazda, by contrast seems to be firing on all cylinders. Here are exciting aspects to look forward to in 2022.

Mazda Presently Ranked #1 Brand Overall By Consumer Reports
Each February, Consumer Reports announces its brand rankings list. This list is all-encompassing, not strictly related to reliability. Presently, Mazda is ranked number one overall in the industry by Consumer Reports. This year, Mazda will defend that title.

As a brand, Mazda ranks higher on CR’s list than Toyota and Lexus for Predicted Reliability. Mazda is ranked higher in owner satisfaction than BMW or Audi on Consumer Reports owner surveys. Every Mazda, all 7 models, are “Recommended” by Consumer Reports. This is a higher model count and a higher percentage of the brand’s fleet than Mercedes-Benz or Cadillac.

Mazda Has A New Crossover Model About To Launch
Mazda’s CX-50 two-row crossover will enter the market in 2022 to augment the smashing success of its CX-5. The CX-5 presently outsells its rivals like the Subaru Forester. The new CX-50’s mission is to take market share from buyers of Outbacks and other slightly larger two-row models in this, the largest single automotive segment in terms of volume in America.

Mazda's New American Plant Is Up and Running
In a time where shortages of inventory are the industry’s single biggest challenge, Mazda has opened a new plant inside America’s borders (Alabama). The plant is expected to produce up to 150,000 vehicles for Mazda annually. Being a joint venture with Toyota never hurts.

Mazda Leads In Safety
In a recent test of two-row crossover safety, the Mazda CX-5 was the only vehicle to earn the highest score of Good by IIHS. Mazda has earned one of the highest percentages of Top Safety Pick rankings for its models.

Mazda’s MX-30 Battery-Electric Vehicle Outselling Cybertruck, Chevy Bolt, Nissan Ariya, Kia EV6, Ford F-150 Lightning, Subaru Soltera, and Toyota B4ZX
Mazda is presently ahead of many brands when it comes to battery-electric vehicle (BEV) deliveries. Mazda delivered MX-30 BEVs in 2021 and in January of this year those deliveries continue. We’re rooting for all of the coming BEVs to succeed, but the fact remains that Mazda is delivering MX-30s right now and all of the models listed above are not being delivered - yet.

Heading into 2022 there are many brands with good overall rankings. Some have a new BEV being delivered. Others are ramping up inventory. A few have a new two-row crossover entering the U.S. market. Only Mazda has all of these exciting developments happening right now.

Image of CX-50 courtesy of Mazda.