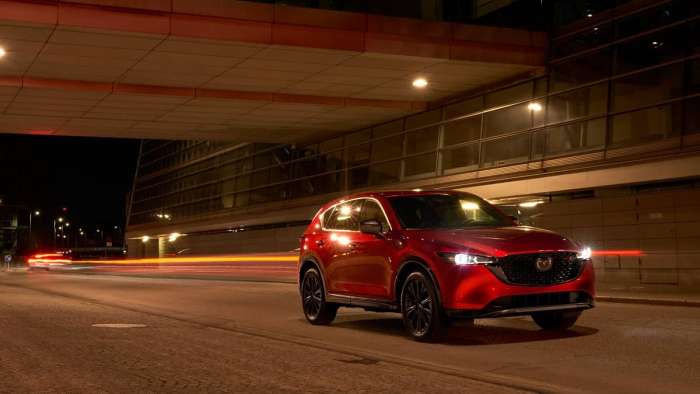 The success of Mazda’s CX-5 continues with an impressive result given today’s unusual market situation.
Advertisement

In today’s crazy shortage-of-product marketplace reporting on “sales” is more like reporting on production capability. With parts and components causing manufacturers to shut down production lines or scale back, the reports you are seeing today don't reflect buyer preference as much as they used to. That said, we feel it is important to highlight which manufacturers are able to keep their products flowing into the driveways of consumers.

For November, Maza’s CX-5 was down a bit from its prior highs. Still, with 10,509 units delivered in the month, it managed to top the sales of the Subaru Outback (10,454), and the Subaru Forester (3,719). We reached out to Subaru's media representative to confirm that the Forester's numbers were correct and received confirmation they are. Commenting on its November deliveries, Subaru’s Jeff Walters, Senior Vice President of Sales, said, “Alongside our retailers, we’re working hard to get vehicles to consumers amid the ongoing production shortage as the demand for Subaru remains high.”

It’s not just smaller manufacturers that Mazda is outselling. Mazda’s CX-5 outsold the crossover its same size from Ford, the Escape (9,420). Ford did not comment directly on the sales of its Escape, which resides in the country’s largest vehicle segment, but instead focused on its Mustang Mach-E deliveries which were just 3,088 units.

Mazda’s CX-5 sales for November were not at the expense of its newer CX-30 (4,404) crossover which had a whopping 66% sales increase in November. Mazda also had a good month with its CX-9 which posted a 17% sales growth versus last November. Mazda also managed to deliver 55 of its all-new MX-30 battery-electric vehicles.

The overall leader in sales of compact crossovers for November may be Honda with sales of 20,682 units of the CR-V*.

Sales of the Miata, Mazda6, and Mazda3 were down from previous highs, and the CX-3 is now discontinued (having been replaced by the CX-30 and new generation Mazda3).

Overall, Mazda’s sales have been going up, not down, over the past twelve months. Year-to-date sales totaled 313,334 vehicles; an increase of 26.4 percent compared to the same time last year.

*Note: Not all manufacturers report monthly sales data. Watch for more details after the quarter and year-end reports in early January.