We test and report on the best Wrangler Jeep has ever produced. The 2021 Wrangler Unlimited Rubicon 392.
Advertisement

To keep our hands from cramping we are going to shorten the name of this Jeep to 'Wrangler 392." Our review will focus on why the Wranger 392 is such an amazing vehicle, how it will thrill its owners, and why those shopping for a premium, high-performance, off-road-capable beast would be crazy not to make this vehicle their first consideration.

Jeep Wrangler Unlimited Rubicon 392 - What Is It?
The Jeep Wrangler is a 4X4 off-road-focused SUV with two rows of seats. The Unlimited part of its name means it has four doors. Rubicon denotes the model’s highest-level of trim with an unmatched array of off-road mechanisms and doo-dads. The 392 is the really important part. This number represents the 392 cubic inch displacement Hemi V8 470 horsepower engine under the hood. In case you are not an enthusiast of the segment, vehicles this size, shape, and capability don’t normally come with V8 engines lifted out of a muscle car. The 392 makes all the difference here. 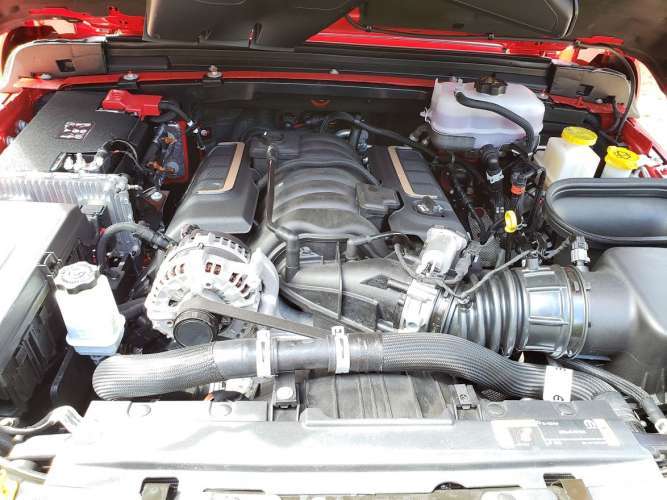 Jeep Wrangler Unlimited Rubicon 392 - Is It Quick and Fast?
Jeeps are not sports cars. Almost nobody expects them to be quick off the line or have tremendous passing ability on highways and byways. However, someone at Stellantis ordered that a V8 be dropped into every vehicle from every one of its many brands into which engineers could shoe-horn one, so the Jeep finally got its nutty engine.

The Wrangler 392 is crazy-quick. In 4HAuto, meaning all-wheel drive, the Wrangler 392 is a rocket from a stoplight capable of 0-60 MPH in 4.5 seconds. Most sports cars can’t accelerate that quickly. We know of no vehicles that can match this one’s launch that also offer its off-road chops. There may be a quarter of a million-dollar Range Rover than can rival it, or some obscure Mercedes G-wagon breathed on by AMG, but they only made two. One for Leno and one for DiCaprio. If you want a Wrangler 392, simply head to your closest Jeep dealership and ask for one.

In our week of testing, we floored the Wrangler 392 anyplace we felt safe to do so. We also took into consideration the neighborhood and the sounds the Wranger 392 makes. We’re not trying to anger our neighbors. Much.

Let us tell you, a quick launch in a sporty car is cool and always fun. Punching the Wrangler 392 is on another level. It’s like the Ram TRX in a way. You simply don’t expect the thing to leap off the line like it does. It’s shocking. You won’t be able to resist a one-part funny and one-part nervous laugh. Your lips will peel back in a grin, and your grip will involuntarily tighten on the steering wheel.

In the first ten feet or so after you punch it, you will need to steer the Wrangler 392. It has a lot of suspension travel and giant cartoon wheels, so it gets a bit goofy, rocks side to side, and starts to dart off-center. This is huge fun, and I’m very glad Jeep left the suspension the way it did. It adds to the excitement.

Passing is also a thrill. The 392 is mated to the outstanding 8-speed 8HP75 auto-magic transmission. Shifts are quick and sharp, just like in a souped-up Challenger. If you pin the throttle while going, say 35 MPH, the Wrangler 392 roars, downshifts, roars some more, and the scenery starts to go by like the lightspeed jump in the Millenium Falcon. And you are still steering a Jeep Wrangler Rubicon, the chassis of which was not originally designed to go from 35 to 70 MPH in the snap of one’s fingers. You better be ready to steer bucko, or you’re gonna see the scenery off to the side of the road in a hurry. We swear this thing actually tips back when given the boot.

We didn’t test the Wranger 392 at high speeds. We were simply afraid to. You try it. We’ll watch from up on that hill while you send it. 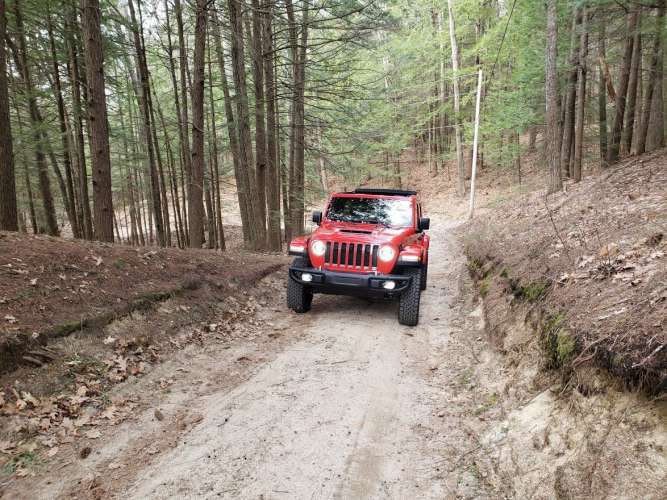 Jeep Wrangler Unlimited Rubicon 392 - Handling and Ride Comfort
We drove the Wrangler 392 on the highway, side roads, city streets, and on backcountry dirt roads. The first thing to know is that you will be steering the Wrangler 392 more than you might a crossover. This is a vehicle with large, high-profile tires and a lot of suspension travel. It’s not a sharp turner and it does not feel like a car or crossover when you drive it. 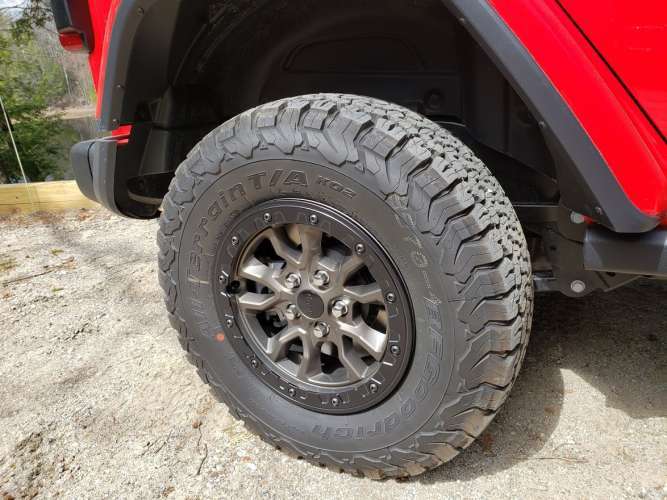 On the Highway, the Wrangler 392 is composed and comfortable. The miles slip by. Don’t buy this vehicle for commuting. It’s not built to deliver satisfaction on a daily grind. This is an adventure SUV, and it shines in that environment brightest. 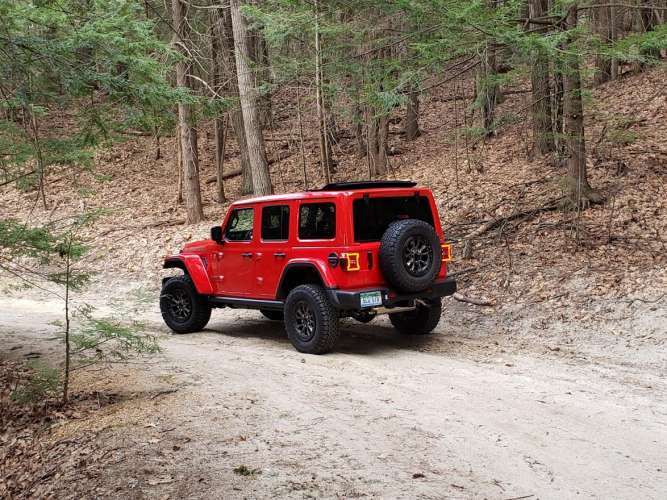 On rural mountain roads, the Wrangler 392 is in its element. It’s a fun vehicle you will enjoy driving. Bumps are dispatched up without any issues. Even huge bumps are no match for the Wrangler 392’s suspension and tires. On dirt roads, the Wrangler 392 is brilliant. You can feel the all-terrain tires when they bit in a turn and you quickly become an addict to that bit of slip you feel before they do so. Washboards and frost heaves that would rattle your teeth in a crossover are swallowed up with no drama. 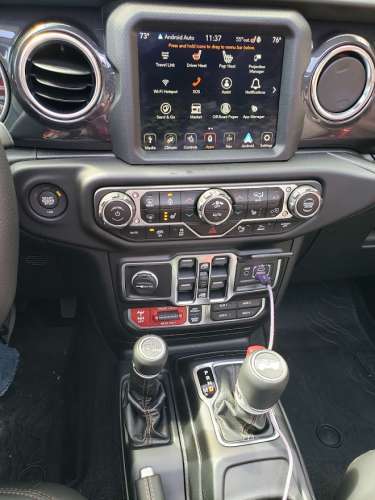 Jeep Wrangler Unlimited Rubicon 392 - Is It Cool Inside?
Oh, my goodness, yes, this thing is cool. Every place you look at it, you say to yourself, “that’s so cool.” The floor mats have little off-road scenes. The front glass has a Willys Jeep etched on it. The dash is so opposite of the stark, bland, electro sleep machines of today that you will jump for joy.

We car testers are born lever pullers. Show us a button and we will press it to see what happens. The Wrangler 392 has buttons with icons we didn’t recognize from 10 years of vehicle testing. What’s the googly-eyes button do? Pushes button. Oh, it makes the exhaust twice as loud. What do the levers in the middle of the array do? Pushes lever. The windows roll down, brilliant! 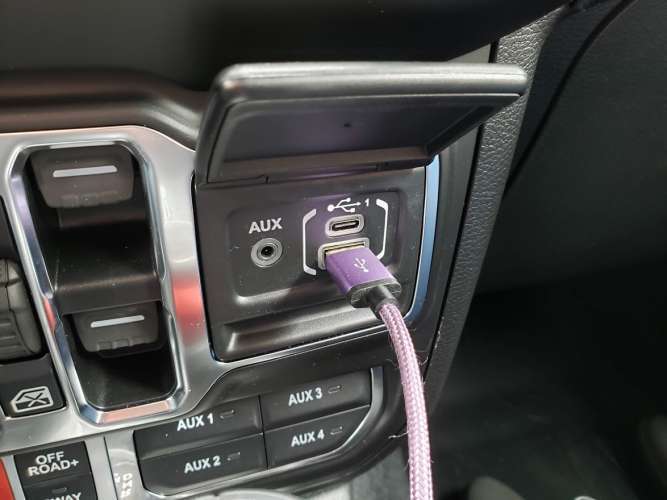 We had the sense not to engage the front or rear locking differentials or decouple the sway bars while driving along. We’re not entirely devoid of Jeep knowledge. Not only does the Wrangler 392 have a ton of cool buttons, levers, switches, and other things to play with, it actually has four extra buttons in case you decide to add stuff. Like a plow, a winch, a light bar, or heck, get all three. One of our passengers was from Eurasia and speaks English as a third language. We think she summed up the Interior of the Jeep perfectly, saying, “Is like airplane. Many things, but are easy.” Exactly! 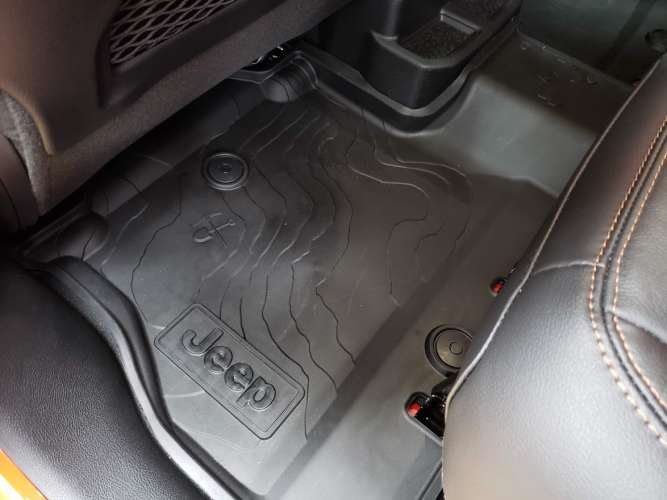 Jeep spared no expense inside the Wrangler 392. The cupholders are grippy so your biggie double-double doesn’t tip and splash you when you turn. All of the receptacle options are at hand including the new tiny USB, the old big USB, and even an Aux-input from the 1990s. There are grab handles all over the place. There are bags to put your removable windows in. In the console is a tool kit so you can strip off the doors. 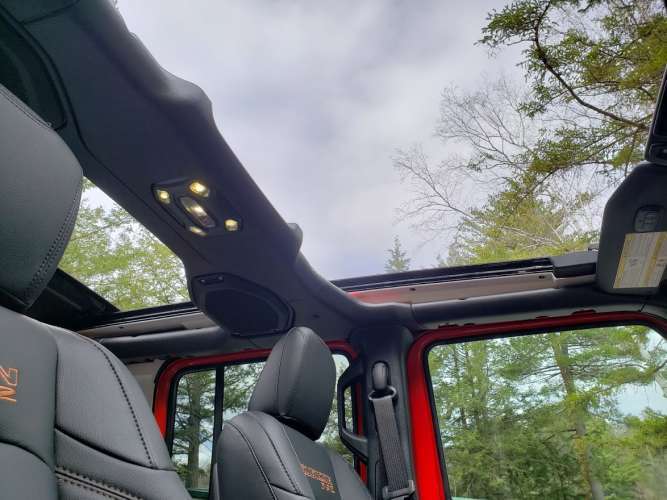 Jeep Wrangler Unlimited Rubicon 392 - The Sky One-Touch Power-Top Is Wonderful
Aside from the muscle-car go-fast bits, our favorite part of the Wrangler 392 was the Sky One-Touch roof. Let’s call it a convertible since it meets 95% of the definition. There is a button on the windshield header that opens up this marvel with one touch (hence the name). Peel back the luxurious textile made by our fellow Americans at Haartz Corp in Massachusetts, and the sky is now your limit. Off-roading is all about being in nature, You want a convertible, and the Sky One-Touch is the best in the business. Check out our deep dive on the Sky One-Touch roof for more details. 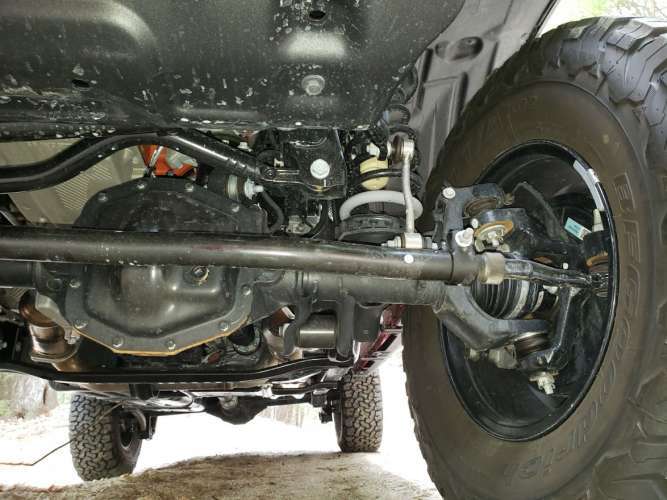 Jeep Wrangler Unlimited Rubicon 392 - Is It A Beast Off-Road?
We bet it is. All the normal Wrangler Rubicon parts are there. This one just has a LOT more torque and horsepower and an added inch of lift. We didn’t have a chance to get our hair muddy, but we presume it does all of the rock-hopping and mud-bogging tricks one can dream of. We hope to take this vehicle off-road on a Land-Rover designed course in the fall. Check back for an update.

Jeep Wrangler Unlimited Rubicon 392 - Is the Infotainment System Disappointing?
Heck no! The audio is among the best of any SUV we’ve tested. Deep thumping bass that hits you in the chest and great clarity. We rocked Pandora using Android Auto and used the volume knob to make the cabin noise from the massive BFG KO2 all-terrain tires go away.

The screen looks a bit small by modern standards, but it works great, and you will not have to use it much to make the Wrangler 392 function. For example, to turn on the heated seats and steering wheel, you can use the buttons on the dash. No hunting and pecking through menus. If you want to park and immerse yourself inside the menus to set all the driver-assist settings, door locks, lighting, and all that jazz to your liking you can do so. 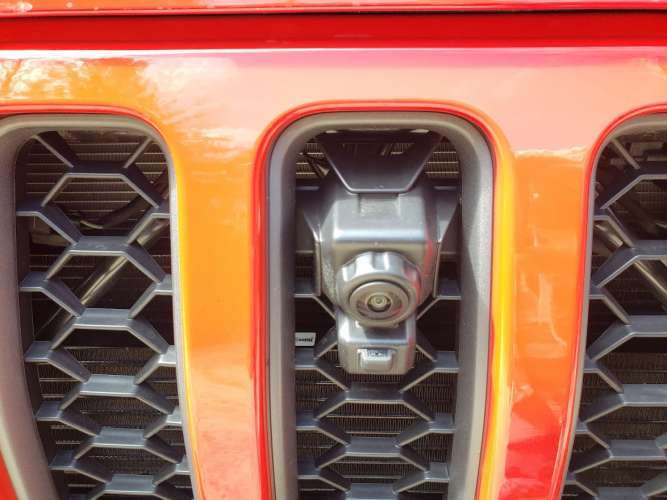 If you use it right, you are going to have the nose of this Jeep pointed at the sky sometimes, and be about to drive over a cliff. Being able to see what you are going to land on is very helpful. The Wrangler’s front camera even has its own washer. We used the front camera to see if our neighbor’s dog was in front of the Jeep after we had stopped to chat with him. Coast clear, off we go. 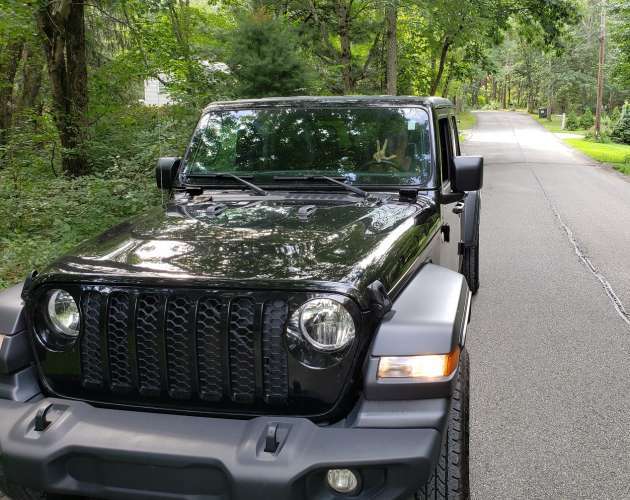 Jeep Wrangler Unlimited Rubicon 392 - The Wave
The Jeep wave is two things. It’s the name of Jeep’s three-year included maintenance package, and it is the name of the wave fellow Jeepsters give you as you drive along. During our testing, we had a Wrangler Sport with four gals in it pull up alongside, all smiling, all waving. “Hello ladies.” We also had a fella in a Gladiator Rubicon offer up a hearty hello and the wave at a drive-through. “Sup dude?” This vehicle will make you friends. How many cars can you say that about? The waves never stop. You don’t realize just how many Wranglers there are in the world until you are in one. And giving is as much fun as getting. We looked forward to seeing other Wranglers in traffic just so we could say, “Wazzup!?”

Jeep Wrangler Unlimited Rubicon 392 - How Many Benjamins?
If you want the best Wrangler Jeep has ever built, and very likely one of the last SUVs that will ever have a V8, you are going to need seventy-nine large. Settle down. Jeep has great Wranglers for sale at less than half that price. This one is very, very special. It has everything. In that context, we feel this is a bargain. Let’s also remember, the Wrangler is one of the top vehicles on Earth for value retention. Used ones sell for near the price of new ones. We would not be surprised if this Wrangler 392 appreciated in value if treated with care. Yeah, that’s the ticket; it’s an investment. 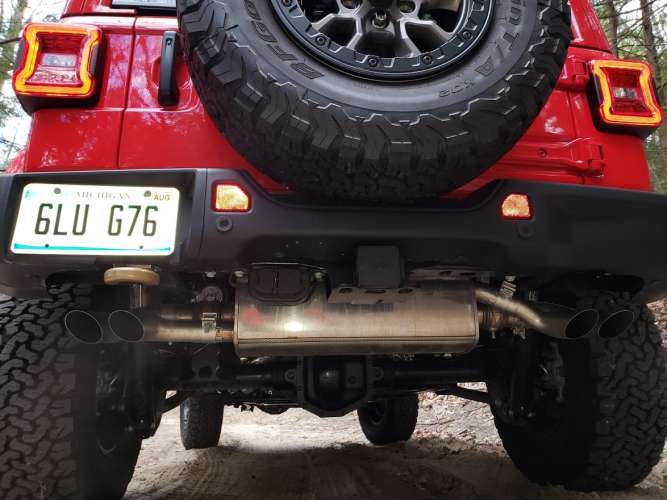 Jane wrote on April 19, 2021 - 3:40pm Permalink
Seems like the perfect vehicle for the back roads of New England . And it has a spare!