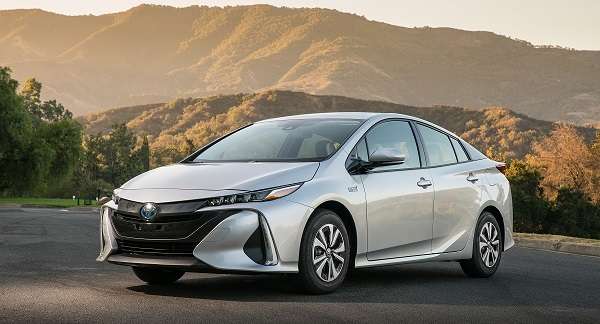 2017 Toyota Prius Prime Plug-In: Back In the Fast Lane

The all-new 2017 Toyota Prius Prime has what it takes to get back on the EV podium.
Advertisement

During its run, the Prius Plug-In was the third leading seller among affordable EVs of all types. Over the approximately three years that both the Prius Plug-in and Tesla Model S were available, the Prius Plug-In outsold the Model S in thirteen of those sales months. Mothballed by Toyota after California kicked the Prius out of the HOV lane by limiting green stickers, the Prius Plug-In is back with a new design and a new name.

Toyota’s new 2017 Prius Prime Plug-in hybrid electric vehicle makes its debut today. The Prius Prime has a new engine, more than double the EV range of the past Prius Plug-In and offers more standard equipment and technology, and more driving flexibility than its peers. And it costs less than its competitors.

Prius Prime – Back In the California HOV Fast Lane
California’s moral crisis is over (for now), and the state has lifted the green HOV sticker limit. This happened just this past month. With unlimited green HOV stickers now available, the Prius Prime will again be back in the fast lane.

Unlike battery-electric vehicles, the Prius Prime does not need a special home charger which will save owners thousands. On a 120 Volt circuit, the Prime can charge to 100% of its battery capacity in about five and a half hours. Homeowners that use a dedicated 240 Volt circuit will be able to recharge in about two hours.

Every Prius Prime comes standard with navigation, smart-key technology, and forward collision prevention with auto-braking, options that can total up to $3,000 on competitor’s green vehicles. Toyota also includes two years of maintenance (or 25,000 miles). That makes The Toyota Prius Prime of the least expensive EVs to maintain.

The federal tax deduction for the Prius Prime EV is $4,500 (for those that can use the deduction). The State of California's rebate is $1,500. Thus, the Prius Prime is less expensive than the Chevy Volt, Chevy Bolt, and the promised cost of the Tesla Model 3, if it ever actually gets built.

Prius Prime – The Drive, The Look, Infotainment
Toyota has enhanced the Prius Prime’s driving characteristics to add more fun to the equation. Those that want to drive using electricity alone can now do so up to 84 MPH.
The Prius Prime does not use the same front body as the Prius. Prius Prime has ts own look up front and in the rear. The tailgate is made of carbon fiber, helping to reduce the vehicle’s weight and thus, enhance its acceleration.

Inside the Plus trim gets a 7-inch infotainment screen. The Premium and Advanced get a huge, 11.3-inch tablet that controls almost every aspect of the vehicle. The 2017 Toyota Prius Prime arrives in dealer showrooms in November.

Thomas W. Carroll wrote on August 18, 2020 - 2:39pm Permalink
I have a 2017 Prius Prime with green stickers (in California) which have expired. I'm filling out the application for red or purple stickers. I'm trying to determine my vehicle's exhaust standard. I have to check one of 5 boxes: ZEV; SULEV; AT PZEV; Enhanced AT PZEV; and TZEV. Can anyone help?? Thanks, Tom