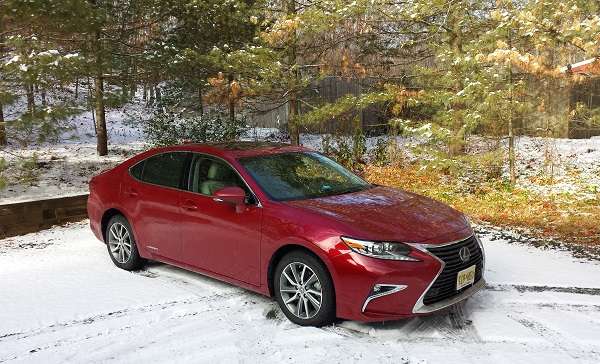 The ES 300h in its current form has been on the market now for nearly five years. Here is how it is staying competitive.
Advertisement

Almost five years ago Lexus invited this TN staffer to its preview launch of the. See the launch of the 2013 Lexus ES 300h here. We had the chance to drive the car back to back with other ES generations and trims and found it be quite progressive. It was a hybrid that didn’t make you feel like you were sacrificing anything to achieve 40 MPG combined fuel economy. This past week we spent some time in the 2017 ES 300h and can offer some perspective on how it is holding up as a design, and as a green car in a world with cheap gas.

As a luxury sedan intended to be a comfortable vehicle, but not a sports sedan, the ES 300h still holds up. At its $51K price point loaded to the gills with options, it still undercuts most European vehicles this size by about the cost of a European family vacation. It also undercuts the entry-level (and higher-performance) Tesla Model S by about $25K. All of the safety kit is now standard, something even smart brands like Jaguar have totally missed the boat on. Its comfort and space still rivals the new Genesis brand, which in the time this Lexus has been on the market has become this writer’s benchmark sedan series for value and luxury in equal measures.

40 MPG is amazing in a vehicle this size, and we can report that in our testing during winter conditions, on winter blend fuel, that the ES 300h offers literally double the miles per gallon we recently recorded in similar driving in a Genesis G80. So the green-car attributes of this large sedan are not in question. Nor is its cost per mile credibility, since the ES 300h uses regular unleaded fuel, the cheapest liquid fuel in the country. In our testing, we saw 38 MPG in mixed highway and suburban driving. During the week we also had the chance to drive in downtown Boston traffic. Seeing the indicated fuel economy go up as one sits in traffic and creeps along slowly from light to light never gets old.

Some aspects of the Lexus ES 300h have gotten old. Lexus didn’t take to heart my comments in the original story that said “We did struggle to increase the navigation volume…” Unlike almost every vehicle on the market, Lexus refuses to simply let the volume knob control the navigation system’s loudness. It makes no sense to this fan of the brand. Likewise, the remote touch interface is now no longer so novel. I prefer a simple touch screen when not using voice or steering wheel controls.

The brakes have improved on the ES 300h. At least to this tester’s senses, there is no more weirdness at all to be detected in the braking system. One can hear the cool hum of the regenerative system when one lifts of the power pedal, but that is no longer weird in 2017. (More on P 2)

The strengths of the 2017 Lexus ES 300h remain its value, its cost per mile for fuel, and its ability to coddle a driver in comfort. Those who want a more sporting hybrid can certainly find it in any Lexus showroom. However, those that don’t require their daily driver to be a rocket sled, but want to sacrifice nothing in terms of size, comfort, and safety will still find the 40 MPG ES 300h the benchmark sedan on the U.S. market.